‘We’re all in this’: Biden links fires and hurricanes as symptoms of climate crisis as he visits flooded homes in Queens 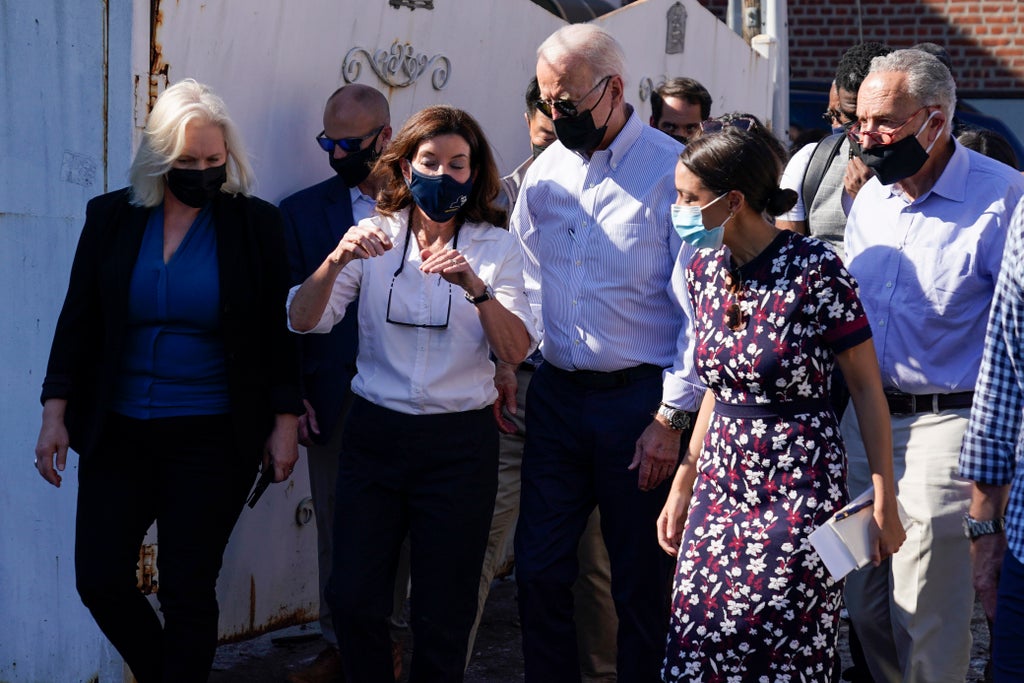 During a tour of flooded homes in a hard-hit neighbourhood in Queens, President Joe Biden said he plans to survey damage from West Coast wildfires, continuing several trips within the last week to see damage from climate-accelerated threats up close.

In remarks on 7 September, he connected growing wildfires and more-severe storms as symptoms of the climate crisis, stressing that “the nation and the world are in peril” as the US battles compounded disasters, from Hurricane Ida’s wreckage on the Gulf Coast and the storm’s aftermath on the East Coast, to the Caldor Fire that has torched thousands of acres in California.

“I think what people are seeing across this country, from the wildfires in California and the west ... all the way down to Louisiana ... people are beginning to realise, this is much, much bigger than anyone was willing to believe,” said the president, standing by a podium with New York’s congressional delegation and other elected officials in front of piled-up drywall gutted out of flooded homes on a hard-bit block in Queens.

“Even the climate sceptics are seeing that this really does matter,” he said. “We’re all in this.”

He was also joined by US Rep Alexandria Ocasio-Cortez, who he thanked for her “gumption” – her district encompasses parts of Queens and the Bronx that saw heavy flooding.

The New York congresswoman, who has backed a Green New Deal resolution, has urged the president to adopt “bolder” climate provisions.

Earlier on Tuesday, the president toured a neighbourhood in the town of Manville, New Jersey, and met with residents who had emptied the storm-damaged contents of their homes onto curbs.

At least 26 people died in flooding in New Jersey on 1 September; at least 18 died in Central Jersey, including four people in Somerset County, where Manville is located.

He then travelled to New York City, where at least 13 people were killed in floods. Most of the victims were immigrants living in illegally constructed lower-level units without legal approval for residential spaces, according to the city’s Department of Buildings.

Five of the six properties where people died in the floods were illegally converted basement and cellar-level apartments. Four of those addresses are in Queens.

“Climate change poses an existential threat to our lives, to our economy, and the threat is here, it’s not going to get any better,” Mr Biden said in Queens. “The question is, can it get worse? We can stop it from getting worse.”

A group of climate activists in New York picketed the president’s arrival, demanding that the administration take more-aggressive action to stop fossil fuel projects and end the leasing of federal land for fuel extraction.

“Fossil fuels are destroying our climate with direct impacts in our own backyard,” Food & Water Watch Northeast Region Director Alex Beauchamp said in a statement. “It’s time President Biden doubled down on his campaign commitments to end our reliance on fossil fuels by stopping the leasing of public lands for fossil fuel extraction and halting the construction of fossil fuel infrastructure projects.”

Protesters also demanded that Governor Hochul abandon plans for upgrading a natural gas power plant in nearby Astoria, Queens, as officials and climate advocates scrutinise its compliance with the state’s climate goals.

Governor Hochul – whose visit to Queens on Tuesday was her third since the storm – called Ida’s aftermath a “humanitarian crisis” for the families impacted by lethal floods.

“The people that we represent, who put their faith in us, are in pain right now. They’re hurting,” she said. “We will not abandon them. ... Mark our words here today: the president and none of us are here to take pictures and walk away.”

During his visits to Louisiana and the northeast in Ida’s wake, the president has pitched his “build back better” agenda and pushed members of Congress to adopt his infrastructure spending plan.

After expressing his condolences to the families who lost loved ones, President Biden said he had come to the region to see the devastation first-hand. “Every part of the country is getting hit by extreme weather,” he noted.

Mr Biden arrived at the small New Jersey airport shortly before noon in Marine 1, accompanied by four other helicopters. His motorcade passed through dozens of protesters, some with megaphones, at the airport entrance, around half supporters of President Biden and the rest for his predecessor, former President Donald Trump.