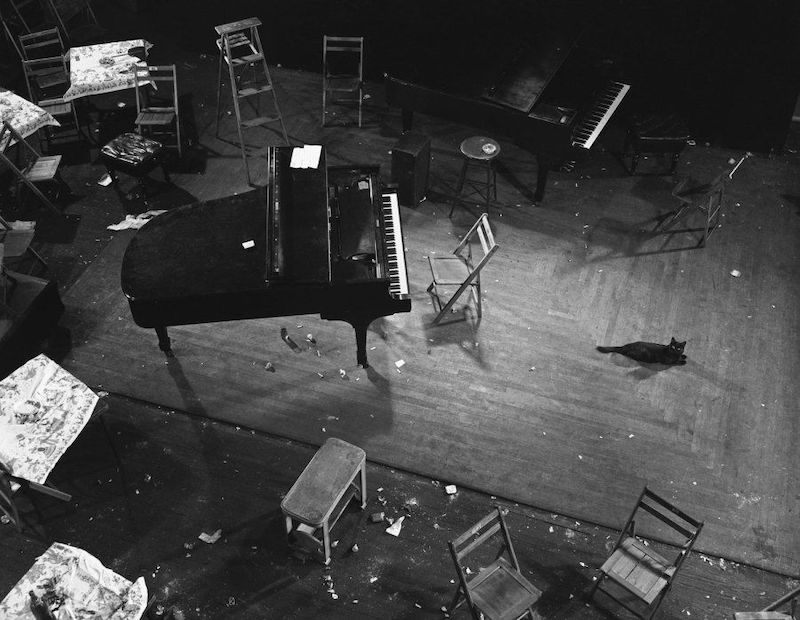 (Welcome to Videodrome. A recurring column plumbing the depths of vintage and contemporary cinema – from cult, exploitation, trash and grindhouse to sci-fi, horror, noir, documentary and beyond.)

Produced underneath the guidance of Verve Records founder, Norman Granz, Jammin’ The Blues was released on May 5th, 1944. Granz’s objective was to showcase the top jazz musicians of the day and shed light on the shifting musicality of the genre, which had begun transitioning away from the populous swing arrangements of big bands in favor of smaller groups experimenting with rhythm & blues and free form improvisations. During the forties, a new generation of musicians would usher in bebop jazz, which would spiderweb into hard-bop, post-bop, and cool jazz. These musical modulations would produce some of the most notable records, musicians, and sub-categories of the genre. Jammin’ The Blues was shot amidst these seismic changes, a historic time capsule of American jazz during its most prolific era.

It’s no surprise that the short film was directed by a photographer, Gjon Mili (most notable for his 1943 LIFE cover story on Lindy Hop), as Jammin’ The Blues is shot as though it’s a series of photographs in motion. Any frame from the ten-minute-long film could be isolated into a still image that would be as graphic as the one that preceded or proceed it. Coupled with the audio, which showcases jazz legends such as Lester Young, Red Callendar, Marlowe Morris, Harry “Sweets” Edison, Sid Catlett, Jo Jones, Barney Kessel, John Simmons, Illinois Jacquet, and Marie Bryant playing “Midnight Symphony,” “Sunny Side Of The Street,” and the title track, “Jammin’ The Blues,” it feels more like a proto music video than a short film. Shrouded in deep shadows and lingering cigarette smoke, Jammin’ The Blues captures the intangible coolness of midcentury jazz on both a sonic and aesthetic level, forever timeless and resolutely hip.

The film marks Robert Burks first credit as a cinematographer, who would go on to become Alfred Hitchcock’s right-hand man behind the camera for films such as Strangers On A Train (1951), Rear Window (1954), Dial M For Murder (1954), To Catch A Thief (1955), The Trouble With Harry (1955), The Man Who Knew Too Much (1956), Vertigo (1958), North By Northwest (1959), The Birds (1963), and Marnie (1964), amongst numerous other in a highly esteemed career. With a keen eye for angular framing, the noir visuals from the film are stylistically rich and expressionistic: high contrast black and white film, low-key edge lighting, dramatic dutch angles, and multi-vision prism lenses.

The production of Jammin’ The Blues caused enough of a buzz to attract the likes of Bette Davis and Humphrey Bogart, who visited the set to see what all the fuss was about. Supposedly, Bogart approached the musicians, asking, “Are you guys getting paid good money for this? If you aren’t, you should strike!” Hollywood stars and starlets weren’t the only ones to catch wind of Jammin’ The Blues. In 1945, the film was nominated for an Oscar in the category of “Best Short Subject (One Reel),” losing to Jerry Fairbanks’ Who’s Who In Animal Land.

In 1995, Jammin’ The Blues was selected for preservation in the United States National Film Registry by the Library Of Congress for being “culturally, historically, or aesthetically significant.” It would go on to be called “one of the greatest of all jazz films” by Turner Classic Movies. Nearly eighty years later, Jammin’ The Blues remains a paramount documentation of one of America’s hallmark art forms, as instantly cool today as it was when it was released. | e hehr

Dig this flavor of culture reportage? If so, support us through Patreon. Help us continue to produce mixtapes, podcasts, radio shows, a/v joints, interviews, features, and much more.

PrevPreviousWatch: Short Films from the 2021 Filmfort Film Festival
NextBooks to Look Out For in October 2021: Part TwoNext