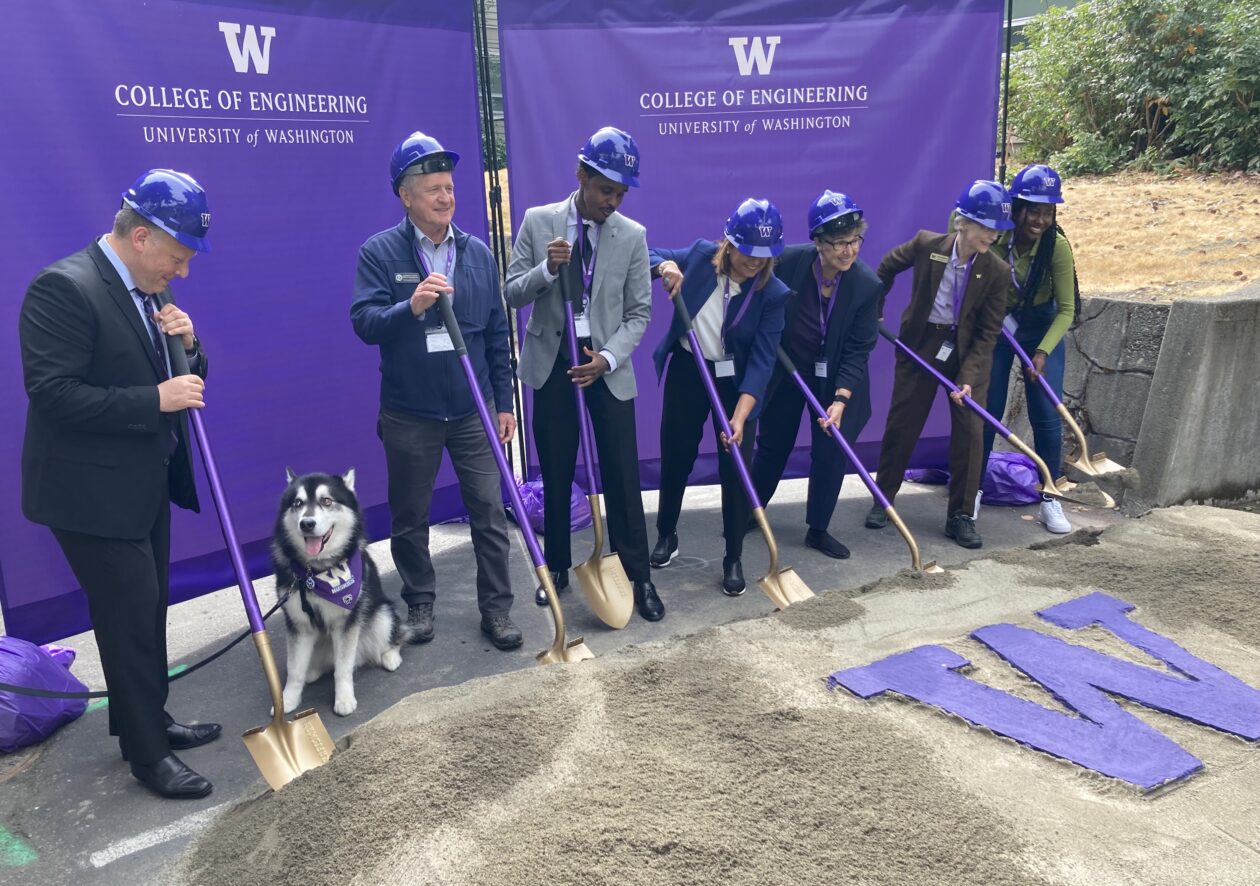 The University of Washington broke ground Thursday on its new 70,000 square-foot Interdisciplinary Engineering Building designed to support students throughout the College of Engineering’s ten departments.

“This is a very big, big deal,” said UW president Ana Mari Cauce at a ceremony attended by state elected officials, donors, builders and students, along with the UW canine mascot Dubs II. The building will help serve the growing number of students earning engineering degrees, which has doubled since 2009 to 1,300 undergraduates each year.

The $102 million project is being supported with $50 million from Washington state, a $10 million donation from Boeing, corporate donors Amazon and T-Mobile (which each gave $5 million), other donors, and UW funds.

It will support a variety of student-focused functions, such as advising, tutoring, job fairs and collaborative projects. It will also house the AI Education Institute, which will help the college revamp its curriculum across disciplines to make AI and machine learning a fundamental element of the programs.

Speakers emphasized efforts to ensure that all students felt like they belonged in the new building, which was designed with student input mediated by Karen Thomas-Brown, associate dean of diversity, equity and inclusion. The design includes smaller, dedicated spaces for affinity groups.

“We know from many studies that having students with diverse backgrounds and ideas and strategies makes better engineers,” said College of Engineering dean Nancy Allbritton. “The Interdisciplinary Engineering Building will truly promote this new level of access, inclusivity, collaboration and hands-on learning for our students from all engineering and computer science backgrounds and also all disciplines.”

The UW’s College of Engineering is spread across 30 buildings. More recent notable additions include The Bill & Melinda Gates Center for Computer Science & Engineering, which opened in 2019 and had corporate backing, along with the Nanoengineering and Science building that opened in 2017.

“We know that the state of Washington has a shortage of skilled engineers. We hear that from Boeing, we hear that from our partners all throughout the tech sector,” said Frockt, who has championed the project from its inception. “We want those students homegrown here.”

The building is slated for completion by mid-2024; the architect is KieranTimberlake and the contractor is Hensel Phelps. It will be centrally located on campus directly east of the Husky Union Building.

“This center seeks to increase the number of culturally responsible engineers and intellectuals, a center to call our very own,” said Hussein.