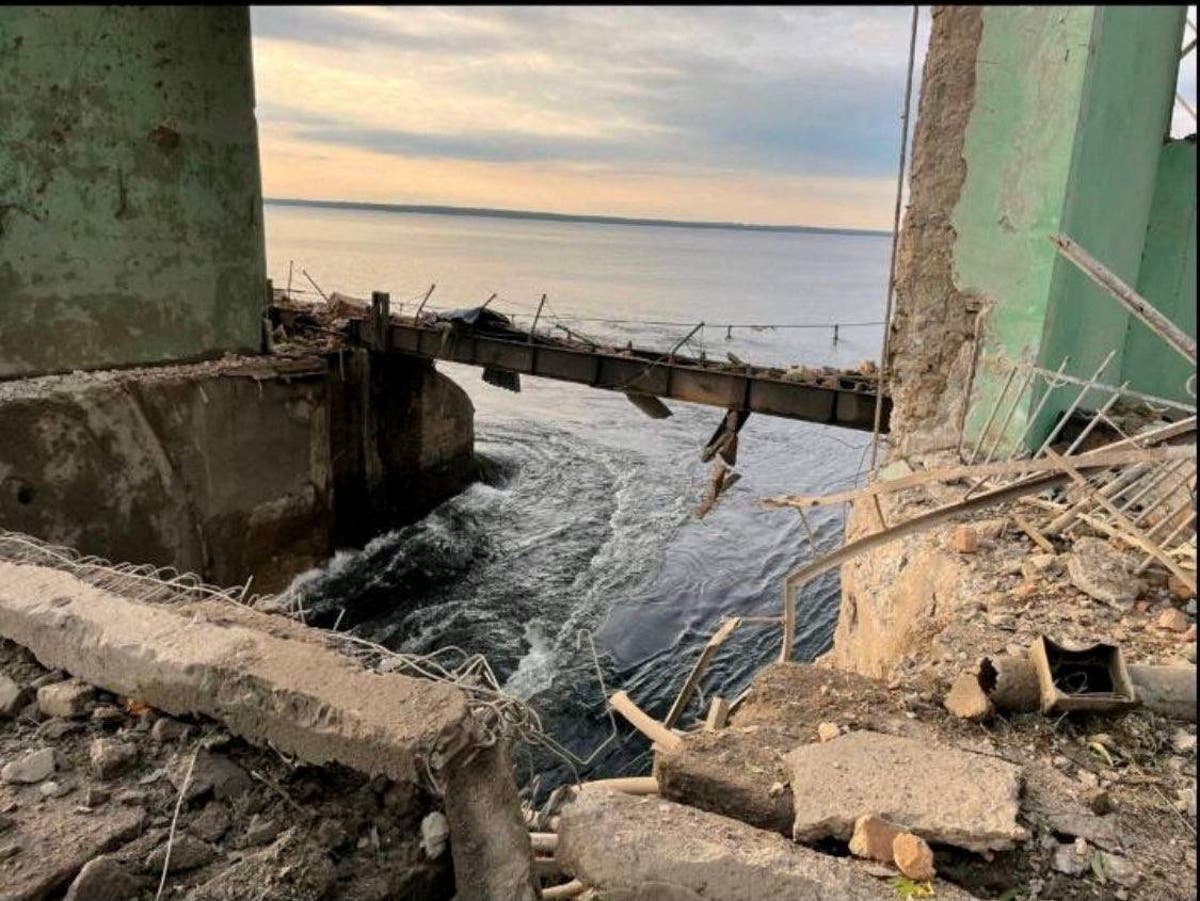 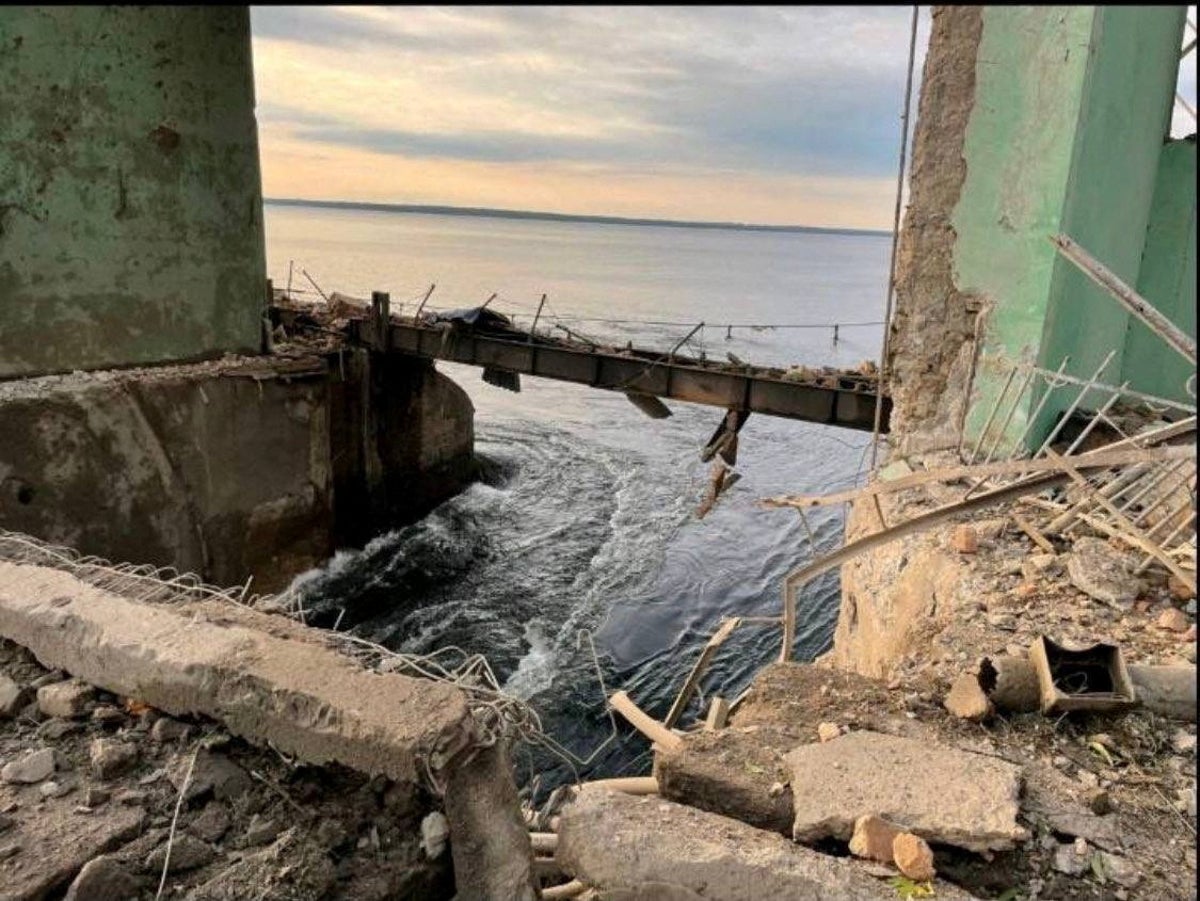 Russia ‘likely to concede area half the size of Wales’ in Ukraine, officials say

President Volodymyr Zelensky’s home city was hit by missiles causing flooding after a dam was struck.

Kryvyi Rih, the largest city in central Ukraine with an estimated pre-war population of 650,000, was hit by eight cruise missiles on Wednesday, officials said.

The strikes hit the Karachunov reservoir dam, Mr Zelensky said in a video address released early on Thursday. The water system had “no military value” and hundreds of thousands of civilians depend on it daily, he said.

Oleksandr Vilkul, the head of the Krivyi Rih military administration, said in a post on Telegram that 112 homes were flooded but that works to repair the dam on the Inhulets river were underway and that “flooding was receding”.

It comes as Mr Zelensky was hurt after being involved in a car accident while returning from a surprise visit to Kharkiv. He was seen by a doctor, spokesperson Sergii Nykyforov wrote on social media but “no serious injuries were found,” he said.

Eastbound natural gas flows through the Yamal-Europe pipeline to Poland from Germany fell on Thursday, operator data showed, while the Nord Stream 1 pipeline from Russia to Germany remained shut and flows from Russia to Europe via Ukraine remained steady.

The drop in flows was in line with nominations, or requests for gas.

Russia's Gazprom said on Thursday that it will ship 42.4 million cubic metres of natural gas to Europe via Ukraine, a volume unchanged from Wednesday.

Flows via the Nord Stream 1 pipeline, which runs under the Baltic Sea from Russia to Germany, remain at zero.

Russia halted flows through Nord Stream on 31 August or what was supposed to be three days of maintenance but the pipeline has not reopened, with Moscow blaming Western sanctions and technical issues for supply disruptions.

The president of the European Commission, Ursula von der Leyen, has arrived in Kyiv.

She tweeted that she will be meeting with president Volodomyr Zelenskiy and with Ukraine’s prime minister, Denys Shmyhal.

Yesterday, addressing the European parliament in Strasbourg, von der Leyen insisted “Putin will fail and Europe will prevail” and said that the EU would stay the course with its sanctions on Russia. “The sanctions are here to stay,” she said. “This is the time for us to show resolve not appeasement.”

Kryvyi Rih, the largest city in central Ukraine with an estimated pre-war population of 650,000, was hit by eight cruise missiles on Wednesday, officials said.

The strikes hit the Karachunov reservoir dam, Zelenskiy said in a video address released early on Thursday. The water system had "no military value" and hundreds of thousands of civilians depend on it daily, he said.

Oleksandr Vilkul, the head of the Krivyi Rih military administration, said in a post on Telegram that 112 homes were flooded but that works to repair the dam on the Inhulets river were under way and that "flooding was receding".

Russian forces suffered a stunning reversal this month after Ukrainian troops made a rapid armoured thrust in the Kharkiv region in its northeast, forcing a rushed Russian withdrawal.

Mr Habeck welcomed G7 trade ministers during a meeting at Neuhardenberg Castle in the state of Brandenburg on Thursday. He added that he could see the possibility of victory for democracy in Ukraine.

“You now can see that it could come to an end with victory for freedom and democracy,” Mr Habeck told reporters after meeting Ukraine's trade minister.

Some Russian troops are “retreating in panic” in response to Ukraine’s Kharkiv counter-attack, the latest British intelligence update.

“The way in which Russian forces have withdrawn in the last week has varied. Some units retreated in relatively good order and under control, while others fled in apparent panic,” the update stated.

It added that “high-value” equipment was abandoned by fleeing forces including weapons essential to enable Russia’s artillery-centric style of warfare.

“Amongst these are at least one ZOOPARK counter-battery radar and at least one IV14 artillery command and control vehicle,” the update said.

“Such abandonment highlights the disorganised retreat of some Russian units and likely localised breakdowns in command and control.”

Local Russian official stands by his statement despite threats

Despite being threatened by the Russian regime, a local Russian official who had called for Vladimir Putin to resign has stuck by his statements.

CNN reported that Nikita Yuferev, a deputy in Smolninskoye Municipal District in St Petersburg said: “We will continue to insist on his resignation.”

He claimed that public opinion in Russia was shifting and that he was receiving support from people. “It shows just how much support we are getting and how our ideas are being accepted by Russian society.

German chancellor says Putin does not think war was a mistake

German chancellor Olaf Scholz has said that Vladimir Putin does not realise the invasion of Ukraine is a mistake.

Mr Scholz said that he urged the Russian president to withdraw troops and re-enter talks with Ukraine during his 90-minute call on Tuesday.

He said that Mr Putin has “unfortunately” not changed his position on the invasion.

“It is right to speak with each other and to say what there is to say on this subject.”

Germany has donated more than $1.2bn in military aid to Kyiv till August this year.

Russia’s Defense Ministry has been accused of publishing a fake video showing them destroying a barge, on which Ukrainian forces were supposedly being transported to retake the Zaporizhzhia Nuclear Power Plant.

However, Kyiv Independent quoting the Insider and Gray Zone Telegram channel said that the “barge” was actually the support of a bridge built and mostly destroyed during WWII.

The Russian people back President Putin, the Kremlin insisted on Tuesday, despite murmurings of discontent and criticism following Ukraine’s successful military counteroffensive in the past week.

But officials warned there was a “very, very, thin line” that would be tolerated by Moscow when it comes to criticism of the Russian leader.

‘Russians support the president, and this is confirmed by the mood of the people,’ says spokesman