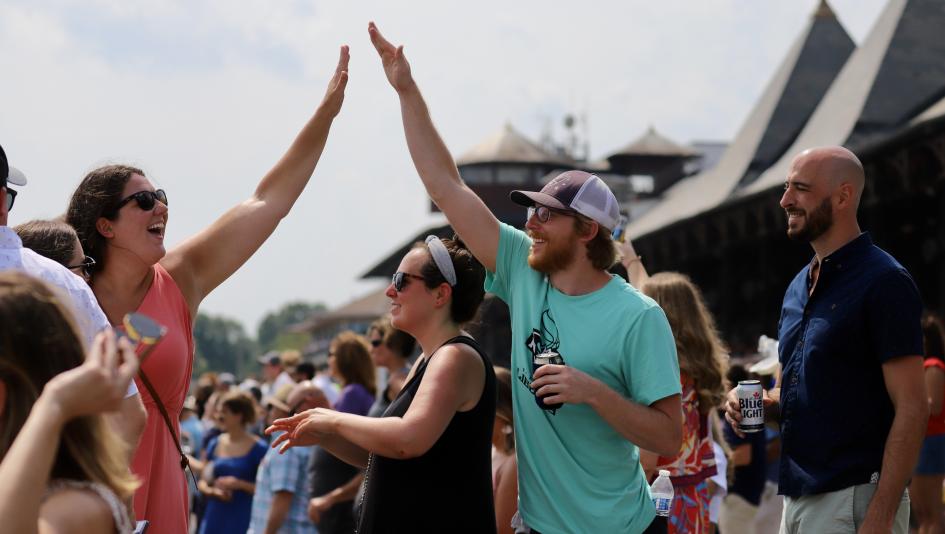 Wait a minute—isn’t the $600,000 Flower Bowl Stakes supposed to take place in the fall at Belmont Park? What’s the 2021 renewal doing at Saratoga on Labor Day weekend?

Well, times change, and the New York Racing Association has reconfigured the Flower Bowl for a new era. First held in 1978, the Flower Bowl has been won by many of North America’s finest female grass runners, including champions and/or Breeders’ Cup winners Sistercharlie (2019), Lady Eli (2016), and Stephanie’s Kitten (2014-15). It’s no wonder why the Flower Bowl awards a “Win and You’re In” berth to the Grade 1 Maker's Mark Breeders’ Cup Filly & Mare Turf.

The Flower Bowl figures to remain an important Breeders’ Cup steppingstone, even with its new date and location. But these aren’t the only aspects of the race changing for 2021. The distance has also been reexamined, shifting from its traditional length of 1 1/4 miles to a more testing 1 3/8 miles — the same distance as the 2021 Maker's Mark Breeders’ Cup Filly & Mare Turf.

An eighth of a mile might not seem like much of a difference, but it could make all the difference for #3 War Like Goddess, who looms as a heavy favorite to win the Flower Bowl. Victorious in five of her six starts for Hall of Fame trainer Bill Mott, the exciting 4-year-old has developed into a star this season, rattling off consecutive victories in the Grade 3 Orchid Stakes, Grade 3 Bewitch Stakes, and Grade 2 Glens Fall Stakes.

But here’s the thing — War Like Goddess is a deep closer who settles at or near the back of the pack before unleashing an explosive finish down the homestretch. Four of her five victories have come running 1 3/8 miles or farther, and her lone defeat came in the Grade 3 The Very One Stakes racing 1 3/16 miles, a distance shorter than her best.

War Like Goddess has gotten so powerful in recent starts, it’s possible she would have handled a 1 1/4-mile edition of the Flower Bowl just fine. But 1 3/8 miles should be even more suitable for War Like Goddess, giving her an extra eighth of a mile to unfurl her powerful strides. Running extended distances is War Like Goddess’s best ballgame, as she demonstrated quite clearly in last month’s 1 1/2-mile Glens Falls at Saratoga. Even while returning from a 3 1/2-month layoff, she was absolutely full of run down the homestretch, beating a quality field by 3 1/4 lengths.

All this is a long-winded way of stating the obvious: War Like Goddess is absolutely the horse to beat in the Flower Bowl, and it’s difficult to construct a case against her. She’ll be a short price in the betting (she’s 4-5 on the morning line), but if we key War Like Goddess on top of exotic wagers like the exacta and trifecta, we can still make a meaningful score betting the race.

For second place, we must afford respect to the Chad Brown trainees #4 My Sister Nat and #6 Great Island. No trainer has been more dominant in the Flower Bowl than Brown, who has saddled half a dozen winners over the last decade. In fact, Brown’s runners are a couple of narrow defeats away from having won the last seven editions of the Flower Bowl.

One of those close losses came last year, when My Sister Nat fell a head short of winning the 1 1/4-mile Flower Bowl. Stretching out to 1 3/8 miles should be a bit more suitable for My Sister Nat, whose signature victory came in the Grade 3 Waya Stakes racing 1 1/2 miles last year at Saratoga. And she remains in encouraging form, most recently coming home second behind War Like Goddess in the Glens Falls.

But Great Island is just as intriguing. Never out of the trifecta in seven starts, the 5-year-old daughter of Scat Daddy is still lightly raced and may have upside for improvement. Certainly she made a great impression in the Grade 3 WinStar Matchmaker Stakes racing 1 1/8 miles at Monmouth Park in July — she gained 4 1/2 lengths through the final eighth of a mile to rally and win by a head. If she handles stretching out to 1 3/8 miles in the Flower Bowl, she can outkick her stablemate for the runner-up spot.

Depending on how much budget you’ve allocated for betting the Flower Bowl, we have two wagering strategies for you to consider. You can play $10 worth of exactas keying War Like Goddess over the Brown trainees, or you can spend $30 to throw in trifecta tickets with the same basic structure.

Wagering Strategy on a $10 Budget

Wagering Strategy on a $30 Budget

Good luck, and enjoy the race!