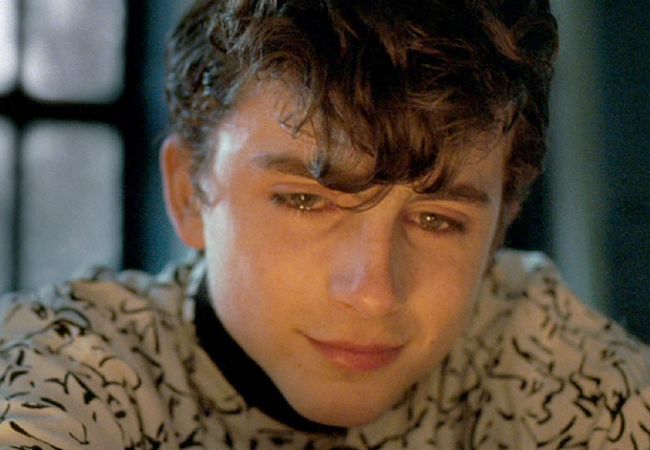 Quote of the Day: “I think it’s tough to be alive now,” Timothée Chalamet said at the Venice Film Festival, during a Q&A about his new collaboration with Luca Guadagnino, the cannibal love story Bones and All.

Any Other Inspiring Thoughts, Timothée Chalamet? “I think societal collapse is in the air — it smells like it,” he added But he softened things a bit by adding: “Without being pretentious, that’s why hopefully movies matter.” I suspect Bones and All will be one of my favorite movies of 2022. The Hollywood Reporter has more from the Q&A.

Wish Come True: Lindsay Lohan, who I’ve always been pulling for, has signed up to do another Netflix rom-com, Irish Eyes. You’re probably writing the logline in your mind right now, right? Well here it is.

What Buddy Cop Movies Get Wrong: Director Walter Hill, who popularized the buddy-cop genre with 48 Hours, explains in a new THR interview what all his imitators get wrong: “The real secret of the film was that these guys were not buddies. They really didn’t like each other and said so constantly. Finally, only after a trial by fire and a trial of character on both sides, do they grow towards a mutual, weary, but mutual, respect. I thought that’s what gave the movie its dignity, if you will. But a lot of people thought it was a formula: get two guys talking back and forth a lot. One’s Black and one’s white. Or variations on that.”

Also: Here’s Eddie Murphy dissecting the scene in 48 Hours that made him a movie star.

Hill’s Latest: Is the upcoming Western Dead for a Dollar, starring Willem Dafoe and Christoph Waltz as sworn enemies who are not buddies. You can read a little more about it here.

Top Gun: Maverick: Is taking one of those flybys at the end of a mission that makes the mean Navy man spill his coffee as everyone laughs. Paramount Home Entertainment just announced that it’s the No. 1 week-one digital seller of all time in the U.S. and in major territories around the world.

Brooklyn Horror Film Festival: Has just announced its first programming wave, and this year’s festival, running from Oct. 13-20, will open with Lorcan Finnegan’s Nocebo, starring Eva Green, and will also include Prime Video’s Run Sweetheart Run, Joe Begos’ Christmas Bloody Christmas, and the North American Premiere of Satan’s Slaves 2: Communion. (I originally read that as Santa’s Slaves, so just putting that out there as an idea for a Christmas Bloody Christmas crossover title.)

Anything Else?  Yes! Other films include Pete Ohs’ SXSW stalker sensation Jethica, which we’ll be writing a lot about in our fall issue, out next month, and Andy Mitton’s very assured COVID chiller The Harbinger, which we covered out of Fantasia. The Brooklyn lineup so far is right here. Speaking of great New York festivals…

Somehow: I have still never seen The Canyons, which stars Lindsay Lohan, is written by one of my favorite writers, Bret Easton Ellis, and is directed by one of my favorite writer-directors, Paul Schrader. So… anyone? Is it time to commit a couple hours?  It looks kind of awesome. And I learned from the trailer below that Gus Van Sant is in it. Note also that the trailer has a tag at the very end helpfully suggesting that the film is available “in theaters or in the privacy of your own home,” which is obviously not weird.

Main image: Timothée Chalamet as a young man in the privacy of his own home in Luca Guadagnino’s Call Me By Your Name.