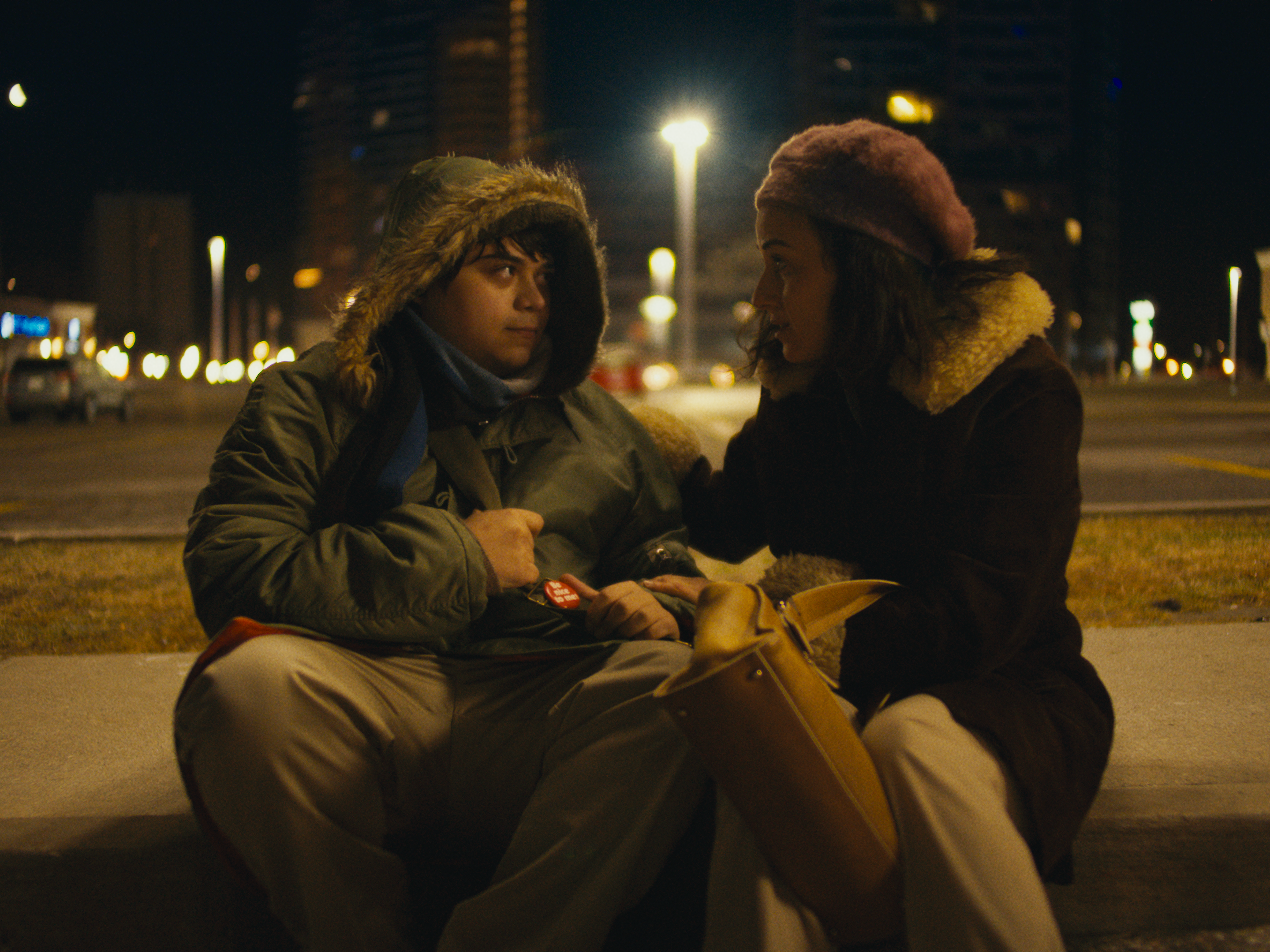 Chandler Levack grew up in Burlington, Ontario, and lives in Toronto where she studied cinema at the University of Toronto and screenwriting at the Canadian Film Centre. She has directed numerous music videos, earning two Juno nominations, and is a veteran journalist and critic who has earned several National Magazine Awards for publications that include The Globe & Mail, The Village Voice, and Maisonneuve. Her short film “We Forgot to Break Up” (2017) premiered at TIFF and SXSW. “I Like Movies” is her feature debut.

“I Like Movies” is screening at the 2022 Toronto International Film Festival, which is running from September 8-18.

W&H: Describe the film for us in your own words.

CL: “I Like Movies” is a story about a pretentious teenage cinephile named Lawrence who gets a job in a video store where he puts all of his longings and frustrations on his older female manager, Alana.

It’s set in Burlington, Ontario in the early 2000s which is where I grew up, and our cast, led by Isaiah Lehtinen, Romina D’Ugo, Percy Hynes White, and Krista Bridges, are really amazing.

W&H: What drew you to this story?

CL: I worked at Blockbuster in high school and wanted to write a story about a budding film bro. I wanted to make an empathetic character study of a young man who is often quite ridiculous and have him come of age through his relationships with women, particularly his mother and his manager at his store who actually call him out and hold him accountable for his actions.

As a woman working as a critic and a filmmaker for the last 17 years, I’ve encountered many. I’ve dated them, worked with them, been mentored by them. I’ve spent my whole life trying to understand these men and the art they loved, but I also want them to change.

I wanted to create a film that could track their development at the most pivotal formation of their identity and ego and set them on a course of healing before it’s too late.

W&H: What do you want people to think about after they watch the film?

CL: How much they miss video stores.

W&H: What was the biggest challenge in making the film?

CL: If it’s okay, let me refer to you to this personal essay I wrote for the Globe & Mail, which details my four-year journey of making “I Like Movies” in all of its oversharing glory.

W&H: How did you get your film funded? Share some insights into how you got the film made.

CL: I made my film with Canadian arts grants from Telefilm’s Talent to Watch Program and the Canada Council of the Arts.

We are an entirely indie, arts grant-funded production and our budget was $225,000.

I also put $10,000 of my own life savings into the film because COVID costs took an unforeseen 15 per cent out of our budget.

W&H: What inspired you to become a filmmaker?

CL: I don’t know! From a very little kid, I always wanted to perform and write and tell stories and make everyone around me be in the plays and little movies I created. My parents would always tell me that I was bossy and demanding and too obsessed with minute details, which I guess are good qualities for a filmmaker, but maybe not great qualities for a little girl. I immediately imprinted on movies, literature, and popular culture from a very young age, especially “The Simpsons,” which I think formed my entire cerebral cortex as a little kid.

As I got a little older, I started watching movies that strongly resonated with] me, which were made by filmmakers like Cameron Crowe, Catherine Breillat, Paul Thomas Anderson, and Stanley Kubrick. And when I worked at Blockbuster, I started to binge hardcore on cinema because I got 10 free rentals a week.

Then I went to the University of Toronto and started learning about the history of film and film theory and became a professional film and music critic. However, I think it was really hard for me to personally admit that I wanted to be an artist. Basically, the journey of the last decade of my life from age 25 to 35 has been slowly but surely finding my voice and making my own work.

I’ve been lucky to have been mentored by a lot of supportive, amazing women like Patricia Rozema, Semi Chellas, and my story editor Jill Gollick. And I’m very grateful to my producer Lindsay Blair Goeldner and my EP Vicki Lean for helping me get my first film made through the Canadian film system.

CL: Worst advice: To keep directing music videos with my ex-boyfriend because I wasn’t good enough to make my own work, which was said to me by an executive right after our co-directed video premiered at the Museum of Modern Art. Reader, I cried in the bathroom.

Best advice: That the job of the director is to keep moving forward and making the movie, which was really reflected by my badass producer Lindsay Blair Goeldner, who has three films at TIFF this year — my feature “I Like Movies,” and the awesome short films “Scaring Women At Night” by Karimah Zakia Issa and “Diaspora” by Tyler Evans. We had so many insane setbacks during the shoot — an lead actor who needed to be recast the day before shooting the second half of the film, locations and crew members who dropped out mid-shoot, the COVID of it all —- and she never ever let me give up, even when I was totally spiraling.

Movies are these completely inorganic things that don’t want to be made. Every day, there are unforeseen challenges that threaten to derail everything you’ve worked so hard for, and you can’t afford to wallow. I’m so glad I had someone in my corner offering tough love, going, “Yes, it’s awful Chandler, but what are you going to do next?”

W&H: What advice do you have for other women directors?

CL: Find a way to make your own art, even if it’s not for very much money, even if it’s hard. Your career will only be able to move forward when you make something that looks and sounds like yourself. Don’t get stuck in self-destructive cycles of doubting yourself and abusing social media like me — just do the work. Rejoice in the work. The work is God. Trick your brain into thinking that you love writing, even when it’s hard. Collaborate with other women, even if people are telling you they don’t have the right credentials or experience levels. If someone’s sensibility and soul matches your film, they are right for you.

Create a tribe of female artists and craftspeople that you love, hire them and recommend them widely to your friends, so you can bring other people up alongside you. Don’t compare yourself to others — a rising tide lifts all boats.

Challenge yourself to watch a hundred movies made by women so you can create a new canon for yourself. Teach other people the canon, so those movies don’t get lost in time. Befriend the other women you meet at film festivals. Watch their films, take them out for coffee and listen to their experiences. Support their art and promote it online.

Take care of yourself and keep making movies. We need you.

W&H: Name your favorite woman-directed film and why.

CL: “Toni Erdmann” by Maren Ade is a very deep touchstone for me. I have never been more delighted, surprised, or moved by a movie. It’s completely inspired me to do crazy comic set-pieces, write braver, more kinetic characters, and taught me that comedy can only be deepened by soul.

W&H: What, if any, responsibilities do you think storytellers have to confront the tumult in the world, from the pandemic to the loss of abortion rights and systemic violence?

CL: I think it’s vital for films to represent real people in society, and reflect social issues, and there have been so many cases where we’ve seen cinema help people feel less alone. All of this is amazing, and there have been so many movies made by women and non-binary filmmakers even over the last year or two— Janicza Bravo’s “Zola,” Emma Seligman’s “Shiva Baby,” Eliza Hittman’s “Never, Rarely, Sometimes, Always,” Danis Goulet’s “Night Raiders,” and Jane Schoenbrun’s “We’re All Going to the World’s Fair” — that have tackled controversial topics of sex work, abortion rights, the residential school system in Canada, online alienation, just to name a few, with so much cinematic verve across many genres and modalities of filmmaking.

I think what becomes dangerous is when cinema becomes super didactic and stops reflecting the same nuances and complications that exist in human beings. People are flawed and complex and have a lot of tensions in their lives. If characters only have to be representational, if we are only funding movies as “content” instead of stories, there is a danger of making propaganda instead of art.

W&H: The film industry has a long history of underrepresenting people of color onscreen and behind the scenes and reinforcing — and creating — negative stereotypes. What actions do you think need to be taken to make Hollywood and/or the doc world more inclusive?

CL: This is just one example, but in Canada, we have this granting system through Telefilm called Talent to Watch which allows first-time filmmakers to receive $125,000 to make their first feature. There’s a committee of other filmmakers who decide who gets the funding instead of granting bodies at a studio, and you don’t have to pay it back. If they award you the funds, they don’t put any stipulations on you for what kind of film you have to make. They are truly just funding first features for art’s sake. While $125,000 is a very difficult way to make your first film — and naturally there are a lot of systemic questions inherent in who can survive for the years it takes to make a microbudget movie — there are a lot of touchpoints in history of filmmakers like Spike Lee, Lena Dunham, Leslie Harris, and David Lynch who made their first features by any means necessary on $100,000 or less.

I just know that if I had been waiting for a million-dollar budget to make my first film, I would be waiting for the rest of my life. No one was gonna give me a chance unless I gave it to myself. I feel like when it comes to first features, the pleasure is in the discovery of a new voice, or perspective we’ve never seen before. Your film doesn’t have to be perfect — it just has to be you.

I’d love to see more funding opportunities available for filmmakers of color and marginalized artists to make their own work in systems that support their vision in a hands-off way, so everyone can be encouraged to follow their own artistic instincts. I just want to see 50 mind-blowing movies from the kinds of voices and perspectives I’ve never seen before, which hopefully propels them to make their second feature with proper industry support.