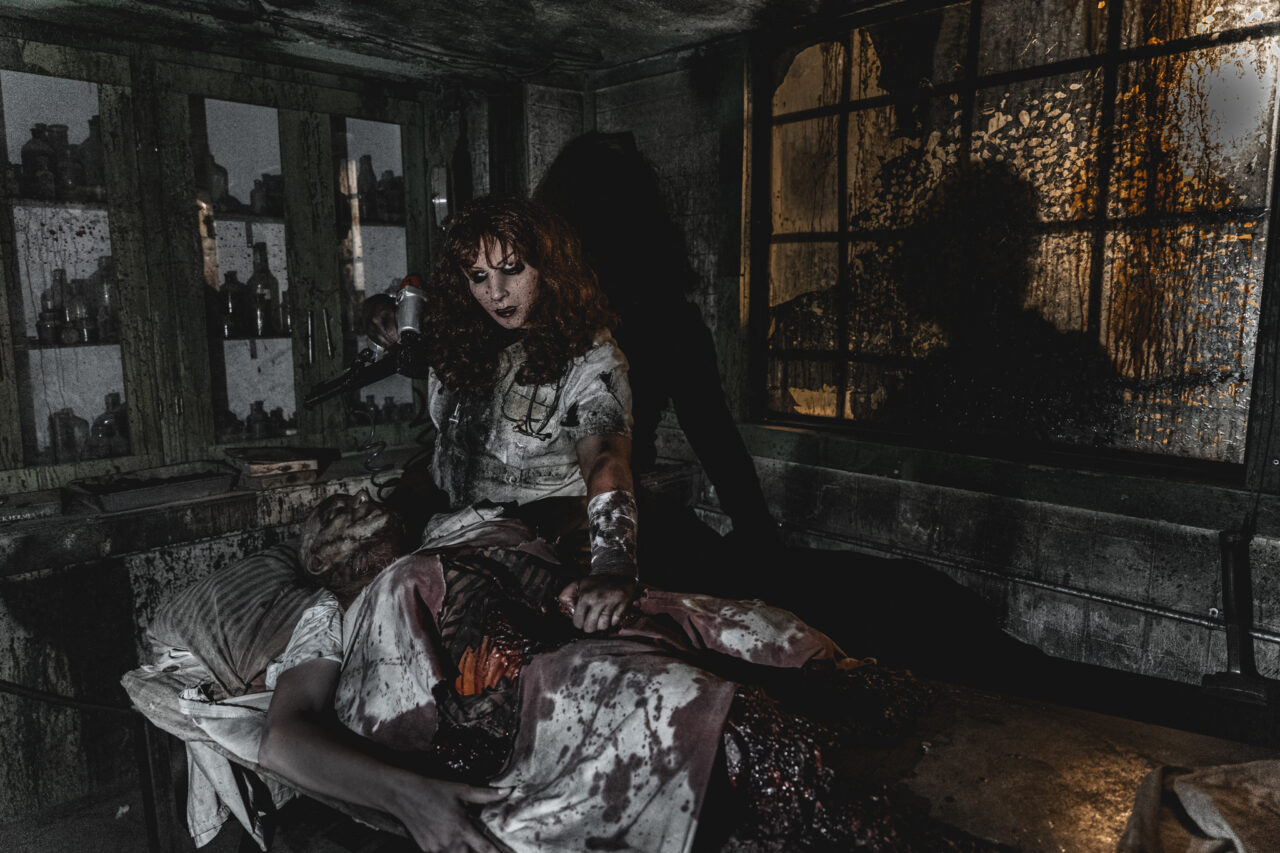 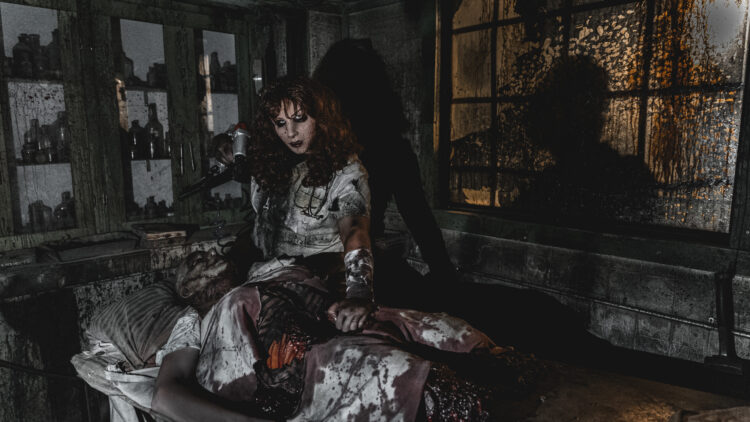 Field of Screams (Mountville, PA) is best described as a horror “theme-park” or full-scale entertainment destination. It’s an evolution of the entertainment industry that embraces the idea of “something for everyone” in horrific style and approach to scares. The entire complex is a Halloween-fan’s dream; as one enters the property, the sounds of terror fill the air, along with rock/metal live music and a variety of clowns, freaks, and chainsaw-yielding psychopaths chase down helpless patrons. A carnival of terror, numerous games, food options, mini escape rooms adorn the central midway, which features four world-class haunted attractions; “Nocturnal Wasteland,” “Haunted Hayride,” “Frightmare Asylum,” and the “Den of Darkness.” Each attraction, by and large, is unique and designed to “scare” with an emphasis on brutal gore and disturbing details, with no expense spared.

One can spend an entire evening at Field of Screams just watching the pure insanity created by the atmosphere and energy of the performers and the reactions to the attractions themselves and, as Co-Founder and Owner Jim Schopf says perhaps best, “there is nothing better than the sounds of screams!”

As an overall attraction in terms of design philosophy, Field of Screams, from a design standpoint, does a few things exceptionally well. Each of the attractions does an incredible job mixing in “scare performers” with animatronics and props. It is almost impossible to discern “real” and not “real,” which creates a constant sense of paranoia and fear. While not heavily actor-driven, those performers in each attraction do a fantastic job conveying their specific roles and themes, infusing moments of dark humor into their twisted and sometimes aggressive performances.

Furthermore, each attraction’s design’s level of detail and quality is of the highest standard, with no expenses spared and no details overlooked. One can spend hours just exploring the intricate details of each specific attraction, combined with an emphasis on sensory-driven scares (using rotten smells, blinding light, etc). Field of Scream’s four core attractions are by far some of the finest designed haunted amusements out there.

“Frightmare Asylum” is a lengthy indoor “asylum” themed attraction, featuring multiple levels of some of the most disturbing, unsettling scenes of horror one can imagine. Medical mutilation, bizarre characters, and vile scenes of sadistic torture are brought to horrific levels of in-your-face reality. Each level of the attraction builds a sense of paranoia and insanity, creating a sense that the “guest” is slowly becoming one of the inmates of the twisted facility.

Some of the more intense scenes include a chaotic 3D-style clown room, a room filled with slow strobe lights and special effects that leave one questioning their senses and sanity, a hallway of “mannequin nurses” and numerous scenes of entrapment, patient torture, and medical experiments that are unapologetically violent. Field of Screams does a fantastic job at creating a sensory experience, infusing tight spaces with the grotesque smells of rotting flesh, using sound and music to create moments of dark humor as well as emphasizing points of terror, and encouraging guests to “explore” their surroundings and escape the confines of “Frightmare Asylum.”

“Den of Darkness” is in many ways a classical, multi-themed haunted attraction that lives up to its namesake by plunging guests into periods of near-pitch black darkness. Featuring extensive upgrades this season, “Den of Darkness” features some of the most gruesome and downright bizarre scenes of any haunted attraction, including a brand new “incineration” scene and one of the most disturbing themes perhaps ever in an attraction, a room of mutilated bodies sewn together by a mad seamstress. An interactive experience, “Den of Darkness,” requires guests to duck, crawl, and physically interact with the sets they must escape from. Vintage 1950s-style music fills the air while violent, aggressive “scare performers” apply their trade, sprinkling in moments of dark humor.

Classic scenes take guests into a most unusual greenhouse, through a 1920’s vaudeville era mascaraed party, into a morgue where bodies refuse to stay “dead,” followed by a plunge into the claustrophobic darkness. A final encounter to a rather unsettling “butcher” shop caps off this gritty, classic yet modern take on haunted “house” attractions.

“Nocturnal Wasteland” is unlike any other. This architectural terror is a post-apocalyptic nightmare plagued with desolation and despair. A jungle-gym of twisted steel, rusted metal, and nightmarish horrors of “fallout” inspired fear, “Nocturnal Wasteland” excels environmentally, an extensive, challenging outdoor trail custom-built and suspended amongst a dark forest backdrop.

“Nocturnal Wasteland” is an authentic representation of a post-apocalyptic nightmare come to life. Guests pass through a “school bus” that has been converted into a “home” for survivors of whatever biological or technical nightmare plaguing this environment. A unique structure, the outdoor trail built with twisted steel and a part of a “living” forest is the home to freaks, mutants, and survivalists who now take glee in tormenting the unlucky visitors. An interactive experience, “Nocturnal Wasteland,” does feel at times somewhat barren. However, the sterile, chilling, almost isolated nature adds to the immersive experience.

A primarily outdoor trail, “Nocturnal Wasteland” is a custom-built outdoor dungeon, constructed out of catwalks scaffolding, abandoned vehicles (Ice Cream Trucks and school buses included), trees that are “alive,” a monster-infested swamp, and a variety of broken-down shacks, abandoned sewer pipes and monstrous scenes of ultimate destruction in the transformative experience of industrial horror. New sets such as a cemetery and swamp add new entertainment to the occasion, and it is always exciting to walk “above” the “Haunted Hayride” along the trail. While heavily detailed and by far one of the most unique “outdoor” attractions we have ever visited, this is one attraction that suffered from a lack of actors. In previous seasons, we encountered countless mutants, cannibalistic hillbillies, and militant ghouls along the trail.

“The Haunted Hayride” is still one of the most impressive and enjoyable attractions featured at Field of Screams. Having undergone major technical and scene upgrades over the past two seasons, “Haunted Hayride” has become one of the most anticipated interests of the season each year. “Haunted Hayride” is designed as a fast-paced “scene to scene” experience with massive set designs based on various horrific themes. Actor performance this season was highly intense, as performers such as clowns “walked backward,” some aggressively targeted patrons and guests, and added a layer of intensity to each scene. Sound is an important aspect of immersion, and while the soundtrack of the show itself is on the “wagon,” it is near impossible to hear what some of the performers are saying in their scenes. We only wish that, in some cases, we were able to “hear” what the characters were saying.

Opening with a gruesome pig “slaughter” scene in which the carcasses of dead pigs descended upon the wagon, as “Willie the Farmer” feasted upon their entrails, developed an intense tone for the entire journey. Then, guests move into an impressive sci-fi facility, “S.H.A.D.E. Cryogenic Mutant Testing Facility.” This is an incredible technical masterpiece. An entire cornfield is transformed into a space-age laboratory full of mutations and hulking monstrosities that are unleashed onto the wagon. The attacks are paired with sci-fi-inspired visual effects that far exceed industry standards.

Iconic scenes from previous seasons return this season with more actors and aggression, the “conservatory” dropped reptiles and insects on the wagon, giant monsters tickled the necks of each guest, mutants roamed the wasteland with falling debris and toxic waste barrels falling from tall heights into air filled with explosions, a public guillotine “execution” scene thrilled the crowd, a nightmare circus tormented the group with endless clowns and chaos, and “Dirty Dan” once again protected his “moonshine” with his band of fellow hillbillies.

The “Haunted Hayride” scenes while familiar are always have become almost iconic for those long-term visitors to Field of Screams. One of the newer scenes featured in “Haunted Hayride”, “CHOP SHOP,” essentially is a junkyard with massive “human” claws aimed at unsuspecting guests. “CHOP SHOP” is a unique take on a “Mad Maxx/techno” inspired theme and ties in the attraction with “Nocturnal Wasteland’s “walk-through. “Haunted Hayride” is once again capped off by a “chainsaw” barn finale.

The “Haunted Hayride” is genuinely designed with a “something for everyone” approach to fear. This season the actors were far more interactive and hands-on with each guest. We feel that some scenes, such as a large wagon “vortex tunnel,” can have more of an “impact” but add to an overall sense of diversity that most hayrides fail to accomplish. In terms of scale, everything is “larger than life,” and with such an aggressive pace and nonstop action, “Haunted Hayride” continues to be one of the best of its genre.

It is challenging to find any critiques or areas of improvement. On our visit, the entire show was flawlessly executed; the pacing of groups was perfect (we never ran into another group); the actors were energized and focused, doing their best to interact with each guest. The entire vibe generated by this world-class scream park needs to be felt to be experienced. It is a genuine horror amusement park, with chaos permeating the air and really some of the most impressive set and scene designs that embrace a diverse range of horror genres.

While many haunt fans always want to know what is upgraded or changed, the Field of Screams design team and management focused heavily on changing the “Den of Darkness” and “Frightmare Asylum” walk-through attractions. Each was already striking in design but has undergone new innovative changes in the haunted attraction genres. If we could find some areas for improvement or change, perhaps Field of Screams could add more “scare performers” to the outdoor “Nocturnal Wasteland” attraction and perhaps add a stronger sound system to the scenes found in the “Haunted Hayride.” However, it is extremely challenging to find any major qualms or areas for improvement in this well-executed operation.

A genuine destination “scream park” guests can spend an entire night enjoying the core haunted attractions, escape rooms, and a variety of games/food options available, and we cannot wait to visit again!  Field of Screams deserves the highest recommendation and recognition for its movie-quality attraction designs and diversity of scares. Visit Field of Screams this season and check out the infamous “Extreme Blackout” event at the end of the season for an even more “adult” mature-themed “intense” experience!