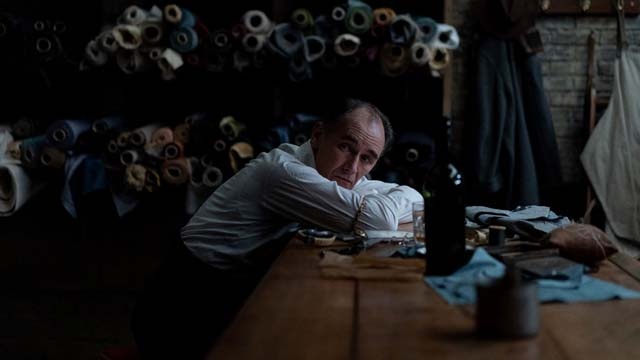 Leonard Burling (Rylance) is a tailor—or rather, a “cutter”—who opens his shop in Chicago after fleeing London’s world-famous Savile Row due to a personal tragedy. There in Chicago, he crafts exquisite suits for the only people in town who can afford them: successful businessmen and a local family of cut-throat gangsters. He remains quiet, allowing this family to use his back room as a drop point for packages. As long as he keeps to himself, there’s nothing to worry about, right? But, after a hasty decision and some twitchy trigger fingers, he finds himself stuck between a rock and a hard place.

This is Moore’s directorial debut, and it isn’t a bad one at that. The plot feels like an homage to Hitchcock with an unsuspecting Burling getting caught in the middle of a gangster turf war. In the hands of many other directors, this plot could have taken a flashier route. Instead, Moore (and co-writer McClain) take the more minimalist path, focusing on plot and dialogue rather than gunfire and pyrotechnics. Much like it’s lead character, The Outfit is superbly tailored with each camera angle, slight pause, and every word cut perfectly to fit.

The acting is wonderful with an understated and terrific performance from Rylance. Burling comes off as a quiet and intentional man, who is set on minding his business and keeping his head down. Zoey Deutch plays Mable, Burling’s assistant. Mable is a marvelous take on the femme fatale. She is equal parts seductive, innocent, courageous and naïve. The film already has a limited cast, of which, there are only two female characters. Each of them is written with depth and wonderfully casted. They are not superficial characters but rather complex ones with their own plans and goals.

The film can be a little slow at times, but not agonizingly so. While Moore does an excellent job using silence to heighten the tension, sometimes it comes at the price of stalling the plot’s pacing and momentum. However, this does give the audience time to steep into the ambiance of the background.

Enough can’t be said about the costume and set design. It is always captivating to see a period piece done well. The one-room setting almost makes the film feel like a play. There are little to no special effects. The plot leans heavily on what is spoken and equally on what is not said. The odd glance. The twitch of a smile. The weight of the unspoken questions in the air.

The Outfit feels as indulgent as each of Burling’s well-crafted suits and will appeal to people looking for a deliberate whodunit.