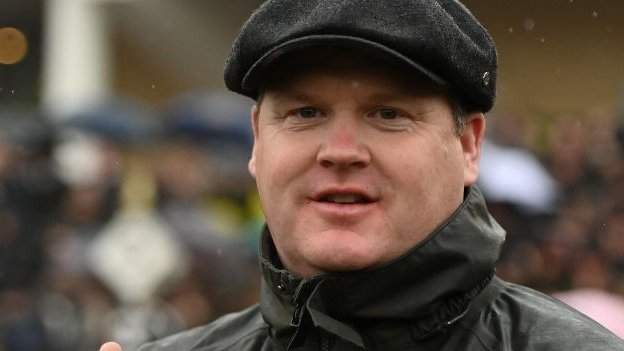 Trainer Gordon Elliott brought up the landmark of 2,000 career victories in Britain and Ireland as Ted Hastings won at Ayr.

The 13-8 favourite, named after a character in TV drama Line Of Duty, was a runaway winner of the maiden hurdle.

Irishman Elliott, 44, paid tribute to his team after reaching the milestone.

"It's great and a big credit to all the staff and the owners, my family and the whole team I have around me," said the trainer.

Elliott, from Summerhill in County Meath, first made his name when he saddled Silver Birch to land the Grand National at Aintree in 2007 at a time when he had not trained a winner in Ireland.

Many big-race successes have followed, including the Cheltenham Gold Cup with Don Cossack and back-to-back National victories with Tiger Roll.

But his career stalled when given a six-month suspension in March 2021 after an image emerged on social media of him sat on a dead horse on his gallops.

"For the whole six months I wasn't training, every day I counted them down on the calendar and dreamed about the first day I was going to be back," he said.

"They're all important to me, whether it's winners in Downpatrick or Listowel or Newton Abbot or Perth, I just love training winners and that's what I get up to do every morning."