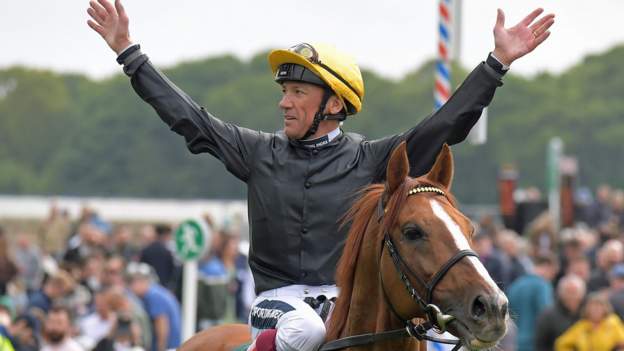 Stradivarius set a European landmark as he stormed to a record third Yorkshire Cup win under jockey Frankie Dettori.

The 6-4 favourite, trained by John and Thady Gosden, was roared on by the York crowd as he held off Thunderous.

It was a 20th career triumph - and this 18th victory at the top Group level is the best ever achieved in Europe.

"That's great," said Dettori. "My mouth is a bit dry and I'm emotional, but what a wonderful story, amazing."

Stradivarius is unbeaten at York and won at the course for a record-equalling sixth time ahead of going for a fourth Gold Cup at Ascot next month.

Described as "a modern legend" in the Racing Post newspaper on Friday, he did not disappoint on the third day of the Dante Festival.

Dettori had his mount sat behind the pace-setting Thunderous and, after a brief flat spot as the tempo quickened, Stradivarius eased through a gap between the leader and Max Vega with three furlongs to run.

He hit top stride before idling in front and then dug deep to win by a length as Thunderous fought back.

Victory put Stradivarius one ahead of Cirrus Des Aigles, who achieved 17 Group wins.

The horse was given a rousing reception by the crowd when paraded in front of the stands and there was another loud cheer as Dettori performed a flying dismount in the winner's enclosure.

"It's rather like Desert Orchid, those amazing horses who capture the imagination because they have longevity," said John Gosden.

Racing will welcome back another of its equine stars on Saturday when Baaeed runs in the Lockinge Stakes at Newbury.

Last year's champion miler, who won the Queen Elizabeth II Stakes at Ascot in October for jockey Jim Crowley and trainer William Haggas, will look to extend his unbeaten record to seven victories.