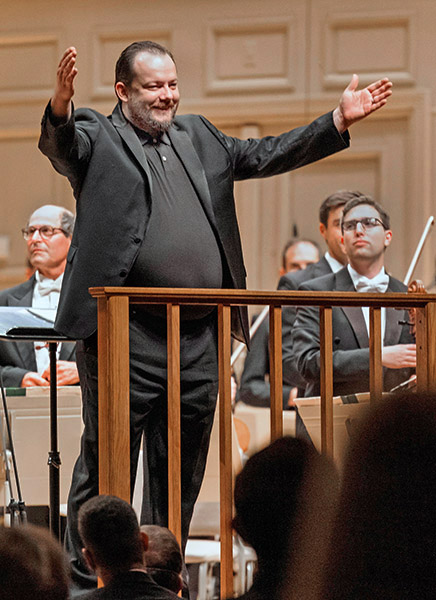 Symphony Hall, though perhaps only two-thirds full, contained an audience, orchestra and staff alike radiantly happy to be back. Management mandated no social distancing, but did require proof of vaccination; and masking (I had to be nudged, politely, by an alert cadre of ushers to keep my mask on); on stage, most of the string players, especially women, wore masks, but of course the wind players went mask-free. What a relief, after a long COVID lockdown, to find the orchestra playing so enthusiastically, and so well, even for a concert with only about 60 minutes of music.

A Threnody (In Memory of Jan Sibelius) by William Grant Still was the most interesting event of the evening. Still (1895-1978) is a genuine original, and yet a long- neglected American composer, whose generous corpus of always interesting modern-Romantic music includes a variety of genres. (Partial disclosure: I have been the producer of two discs of Still’s music for the Videmus ensemble, including one, New World 80399-2, that has received national attention.) The Threnody is short — five minutes — splashy and lush in harmony, not quite what one identifies with a threnody, but perhaps paying homage to Sibelius’s grand manner. It featured a dialogue between brass fanfares, espressivo divided strings like Ravel’s, a march in 4/4 with snare drum and chimes, and a minor-mode folk-melodic style very like Henry F. Gilbert’s harmony of a century ago, or more recently like Still’s own Afro-American Symphony, which has been performed several times by the BSO. This provided a too-brief pleasure.

Richard Strauss’s Symphonic Fantasy on Die Frau ohne Schatten constitutes one of many examples of the composer’s tendency to recycle and re-invent his own music for entirely legitimate mercenary reasons. The operatic predecessor, completed in 1917, was the sixth of Strauss’s fruitful collaborations with the poet Hugo von Hoffmannsthal, and the most enigmatic, if you can make your way through the nebulous, oneiric story. This 21-minute-long fantasy assembled all of the tendencies I most dislike about so much of Strauss’s music — muddy orchestral counterpoint (Strauss would never, I repeat, happily write one note where 200 could be mobilized for the same musical purpose), rich chromatic harmony liberally strewn with clichés, orchestral tutti almost all the time, cadences arriving in the middle of nowhere, and above all, a dearth of places to breathe. I watched in wonder as the violas and cellos furiously seesawed and arpeggiated back and forth without being able to hear anything they were playing. Yet I knew from the beginning that all of these episodes make for important aspects of Strauss’s orchestral style from before Zarathustra (there’s a place in that work where the violas are divided in 12, no less) to Rosenkavalier and beyond. Nevertheless we heard many fine moments in this sprawling grab-bag of sound — an elegantly sentimental D-major solo for trombone with a wandering countermelody in the upper strings; scary shrieks for paired piccolos; some spectacular changes of key that left me wondering in awe how Strauss got there; and a lovely, quietly luminous ending in C major that seemed to forgive all the Oktoberfest noise that came before. Much of the time the orchestra played too loudly, especially when encouraged by Andris Nelsons, whose admirable precision of beat too often pointed from ff to fff and even sfffz, though I doubt those were indicated in the score. (I have complained about this at other times in these pages.)

Prejudices out front first: the Sibelius Violin Concerto, with its vague, humid melodic lines, emphysematic form, and misplaced, unmotivated virtuosic display, finds echoes in many Romantic violin concertos, yet  I seldom object in the same manner to contemporaneous piano concertos. But such a fine performance as last night’s pointed me persuasively to some really beautiful moments. The ethereal, impressionistic beginning, for instance, set a tone that Sibelius might have sustained and expanded through an entire movement, except for unwelcome outbursts of cheap passion, like those high-register sixths. The slow movement provided a fine cantabile, with the solo violin entering on a prominent Russian 6th (indeed, there are notable Russian 6ths all over this concerto (see my article explaining this important psychological marker of late 19th century northern Europe HERE), and ending with a pure B-flat major that could have been marked religioso. The finale, which Tovey called “a polonaise for polar bears,” begins with a timpani tattoo that echoes Sibelius’s own First Symphony, relentlessly and very effectively. This is the most vigorous and convincingly dramatic movement in the entire concerto, notwithstanding how some of its passagework borrows from Paganini’s Caprices.

Lisa Batiashvili transmitted this generally colorless concerto with flawless persuasiveness. Her tone was perfect, especially her expressive pianissimo. Her control was ironclad.  Her optics were arresting as well; a strikingly beautiful woman, she spent a good deal of her resting time turning around, smiling at the orchestra with her eyes closed, radiating total absorption in and command of the music. Her triumphant performance managed to outfight the orchestra’s constantly overbearing fortissimo, and the audience rose to its collective feet. Called back several times, Batiashvili obliged with a two-minute tremolando etude called “Doluri” by Alexi Machavariani. We left with gratification after our two-year collective incarceration.

Mark DeVoto, musicologist and composer, is an expert on the music of Alban Berg, Debussy, and other early 20th-century composers. A graduate of Harvard College (1961) and Princeton (Ph.D., 1967), he has published on many music subjects, and edited the revised fourth (1978) and fifth (1987) editions of Harmony by his teacher Walter Piston.