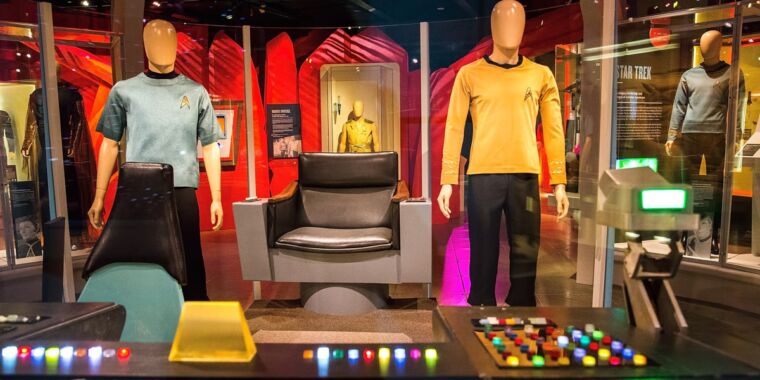 Back in 2016, the Museum of Pop Culture (MoPOP) in Seattle unveiled an immersive new exhibit, Star Trek: Exploring New Worlds, in its Science Fiction Museum and Hall of Fame–a tribute to the hugely influential long-running franchise. The exhibit embarked on a national tour two years later and has been traveling around the country ever since. And now it's come to the final stop on its journey: the Skirball Cultural Center in Los Angeles, California, where Gene Roddenberry first created his visionary series, Star Trek: The Original Series (TOS).

"Star Trek's vision resonates deeply with the Skirball's commitment to using the power of arts and storytelling to help build a society in which everyone belongs," museum director Sheri Bernstein said during the press preview last month.

Among the highlights of the exhibit are Captain Kirk's command chair, and the wooden helm and navigation console from TOS, fully restored. There are plenty of props: different designs of tricorders, communicators, phasers, and P.A.D.Ds; a model of a Borg cube; and lots of weaponry, including a Klingon disruptor pistol.

And of course, there are many, many models of the various spacecraft featured in the franchise over the decades, including filming models for the Enterprise, the USS Excelsior, and the Deep Space Nine space station. "I love spaceship models," MoPOP's Brooks Peck, curator of the exhibit, admitted. "Now it's all digital, but back then it was all about plastic and wood models, so there's a wonderful craft to those pieces."

Peck is also proud of the fact that the exhibit showcases the captain's uniforms from all the major Star Trek TV shows. His personal favorite? Kathryn Janeway from Star Trek: Voyager. "Best Star Trek captain ever," Peck joked. "I will fight you over that." There are also many original costumes worn by cast members of the various series, from TOS —including the tunic worn by evil Captain Kirk in the episode "Mirror, Mirror"—all the way through to Star Trek: Discovery.

On the interactive side of things, visitors can crawl through a Jeffries tube, or be "assimilated" by the Borg. A transporter simulation lets people create short films of themselves beaming down to to the surface of an alien planet. There's a station where one can listen to people reminisce about their favorite Star Trek films and shows, and what the franchise has meant to them. And of course, there are tons of tribbles lurking throughout, for eagle-eyed visitors who want to try and spot them.

In his press preview remarks, Peck emphasized that the characters and themes of TOS were quite radical when it first aired in 1966. This was a time when the Cold War was in full swing, and there was a great deal of racial tension in the US, despite passage of the Civil Rights Act in 1964 and the Voting Rights Act the following year. This was the broad cultural backdrop against which Captain Kirk and the crew of the USS Enterprise had their adventures, all infused with Roddenberry's optimism for the future.

"Roddenberry believed not that we would get past our differences, but that we would, in fact, embrace our differences, in the sense of diversity," said Peck. "Sadly, this is a rough time in this nation. We're seeing a lot of division again. So I'm pleased that we can take some time to look at Star Trek, and its idea of inclusion and working together to build a better and just society, and to hold that up in a fun, artistic form. What Star Trek brings is this optimistic vision of the future that is really inspiring to people."

Laura Mart, managing curator for the exhibition, also expressed her hope that the exhibit would channel the original Star Trek ethos, ending her remarks with an especially apt quote from Roddenberry:

I believe in humanity. We are an incredible species. We're still just a child creature, we're still being nasty to each other, and all children go through those phases. We're still growing up. We're moving into adolescence now. When we grow up, man, we're going to be something.