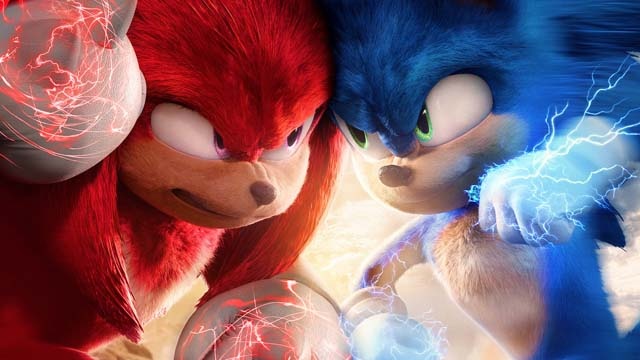 Video game icon Sonic is back in Sonic the Hedgehog 2, with the same director (Jeff Fowler) and writers (Pat Casey and Josh Miller), with the addition of John Whittington (The LEGO Batman Movie) to the scripting crew. This time around, the acting is solid, the script is cohesive, and the fun is taken to console-gaming extremes.

Sonic (Ben Schwartz) desperately wants to fulfill the role of hero that he knows he was born to be, but he doesn’t yet have the maturity or discipline that it takes. Counseled by his mentor, Tom Wachowski (James Marsden), to let that destiny come to him instead of seeking it, Sonic tries to behave. Unfortunately, Dr. Ivo Robotnik (Jim Carrey) has attracted an ally to the mushroom planet in Knuckles (Idris Elba), who helps him escape and return to Earth. The two villains’ common goal is to seek ultimate power - one for revenge and the other to fulfill his view of destiny. Only Sonic and his newfound friend Tails (Colleen O’Shaughnessey) can prevent Robotnik from the complete enslavement of their adopted planet.

Unlike the previous film, the story for Sonic 2 is engaging, interesting, and entertaining. With the addition of Whittington and his experience with feature-length work, the writers found ground for the two-hour running time. The humor is better, as is the adventure. There are a few moments where the tale slows a bit, but these are infrequent. Fowler’s direction is tighter, as though there is a greater understanding of these characters than before. This comprehension leads to several call-outs to the games that enthusiasts will appreciate. This understanding also flows into Carrey, whose original performance was two-dimensional at best. This time around, he takes the character to exceptional levels without exaggeration. Instead of playing the character, he becomes it, and the result is delightful.

The visual effects are stellar, particularly in the scenes that combine live-action characters with animated ones. As a result, the film exemplifies how seamless integrating the two has become. Even during the vivid fights, the audience doesn’t get lost or lose track of what is happening. Many of these moments are enhanced by excellent musical choices.

Sonic the Hedgehog 2 is fun, entertaining for all ages, and a far better film than the original. It has a definite video game feel in the action scenes. At the same time, the lesson about growing into yourself rings loudly throughout the story.