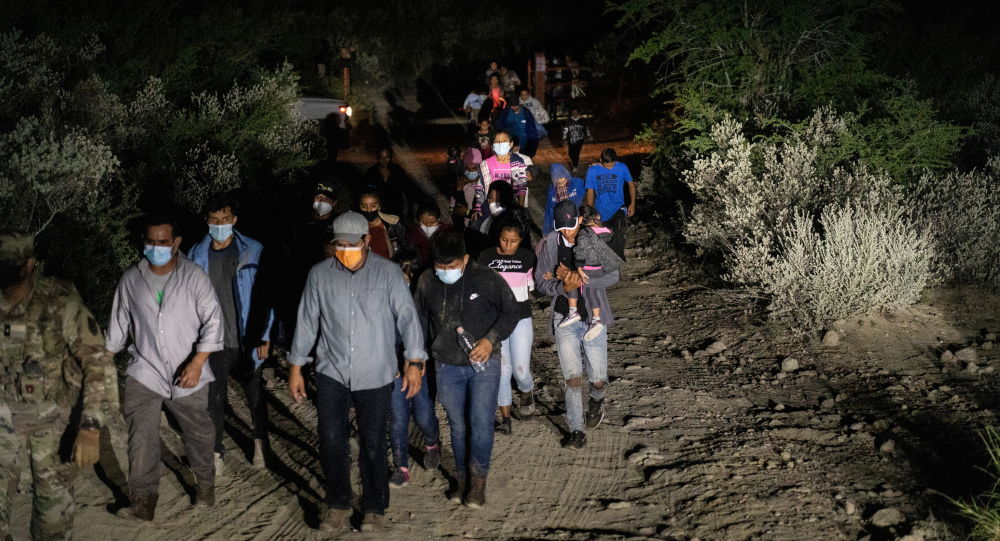 More than 212,000 undocumented migrants were detained along America's southern border with Mexico in July, in the biggest monthly total since April 2000.

The US Supreme Court's decision to reinstate former President Donald Trump's "Remain in Mexico" migration policy has "brought some measure of relief" to "some" officials in the Biden administration, The New York Times (NYT) reports.

The newspaper claimed the court's move "looked like a major defeat" for the US president, who had repeatedly condemned the programme as "inhumane".

The goal of the policy, also known as the Migrant Protection Protocols (MPP), was to block tens of thousands of Central American asylum seekers by making them wait in Mexico for the outcome of their immigration hearings in the US.

Migrants from Venezuela await transportation to a U.S. border patrol facility after crossing the Rio Grande river into the United States from Mexico in Del Rio, Texas, U.S., May 11, 2021

The report by The New York Times comes as the news outlet Politico cited unnamed sources as saying that the Biden administration is considering restarting "what it describes as a more humane version" of the Remain in Mexico programme.

The so-called "Remain in Mexico lite" stipulates that a small number of asylum seekers should wait in Mexico for their cases to be processed and give them better living conditions and access to attorneys, according to the sources.

The Biden administration is now reportedly in talks with the Mexican government to hammer out the new policy, which was slammed by Marielena Hincapie, executive director of the National Immigration Law Centre.

"One of his [Biden's] campaign promises was to end MPP. He did that. He should stand by that. The answer is not to simply find a gentler, kinder MPP 2.0. That completely flies in the face of his promise", Hincapie told Politico.

Robyn Barnard, senior advocacy counsel for refugee protection at Human Rights First, in turn, apparently took aim at Biden, saying in an interview with the outlet that "the most frustrating part of the last eight months has been just the constantly changing policies and situations on the border".

Barnard spoke a few weeks after the US Supreme Court ruled that a federal judge's order to reinstate the Migrant Protection Protocols had to be followed. Earlier in August, US District Judge Matthew Kacsmaryk of the US District Court for the Northern District of Texas ordered the Biden administration to reinstate the MPP, which the US Department of Homeland Security (DHS) had formally ended in June.

Kacsmaryk accused DHS Secretary Alejandro Mayorkas of failing to consider "several of the main benefits" of the programme and acting "arbitrarily and capriciously" in ending the MPP.

In this Friday, March 19, 2021, photo migrants are seen in a green area outside of a soft-sided detention center after they were taken into custody while trying to sneak into the U.S., in Donna, Texas.

In his 53-page opinion, Kacsmaryk wrote that Mayorkas failed "to show a reasoned decision" for wrapping up the programme and added that the DHS chief did not address "the problems created by false claims of asylum", in violation of the Administrative Procedure Act (APA). The judge also stressed that since the programme's termination, "the number of enforcement encounters on the southwest border has skyrocketed".

The developments were preceded by Vice President Kamala Harris warning would-be migrants against trying to enter the US illegally.

"[…] Do not come. The United States will continue to enforce our laws and secure our borders. If you come to our border, you will be turned back", she said during a visit to Guatemala in early June, in a statement that came amid an ongoing surge in migrant crossings.

In July, at least 212,672 undocumented migrants were encountered on the nation's southern border, which is a 21-year high.

The Biden administration formally scrapped the programme on 1 June following a review by the DHS. At the time, the White House suspended new enrollments in the programme, which required immigrants seeking asylum status in the US to wait in Mexico before being summoned for their hearings.

Other moves included rescinding the Trump travel ban and promising a "path to citizenship" for more than 11 million undocumented immigrants already living in the US.