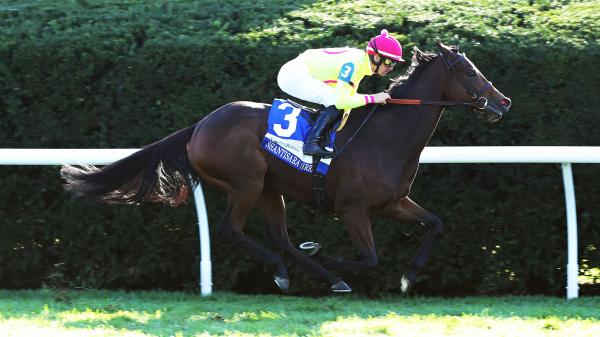 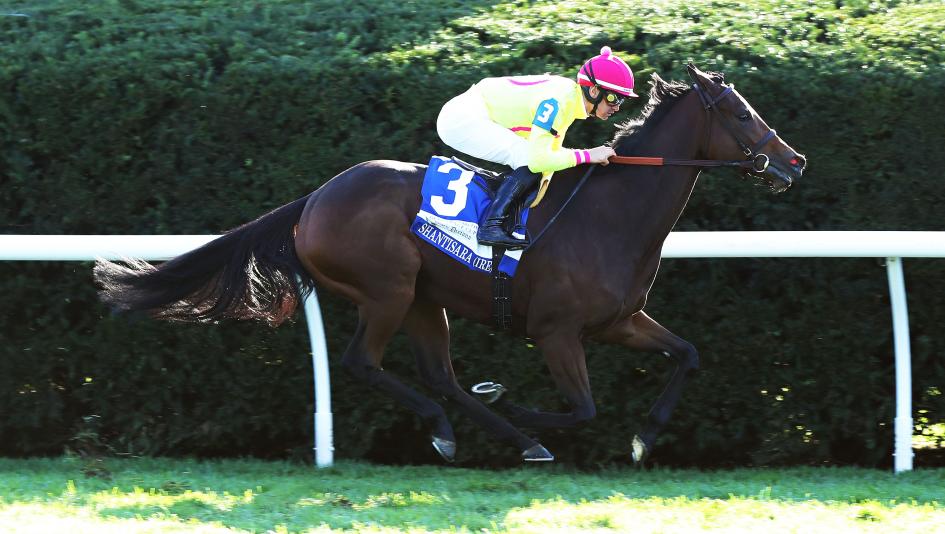 Patiently handled by her connections and in top form Oct. 16, Shantisara drew off to a record-setting five-length victory in the $500,000 Grade 1 Queen Elizabeth II Challenge Cup Stakes Presented by Dixiana at Keeneland.

The Chad Brown trainee is the first top-level winner for her sire Coulsty and is from the first crop of Rathasker Stud's son of Kodiac, who stood the 2021 season for an advertised fee of €4,000. The winner was bred in Ireland and initially raced in France before she was imported to the U.S., where she is now 3-for-4 for owners Michael Dubb, Madaket Stables, and Robert LaPenta.

The 1 1/8-mile turf test for sophomore fillies featured a 1-2 finish for Brown, as Shantisara ran down her pace-setting stablemate Technical Analysis at the three-sixteenths pole and drew clear with a strong turn of foot to win going away on yielding turf under Flavien Prat. According to Keeneland, her margin of victory is the largest in 38 runnings of the QEII, eclipsing the 4 1/2-length victory by Hot Cha Cha in 2009. The final time over yielding turf was 1:48.86.

It marked the second Saturday in a row that Brown has run 1-2 in a grade 1 race at Keeneland. In the Oct. 9 First Lady Stakes Presented by UK HealthCare, Blowout and Regal Glory provided owner Peter Brant and Brown with the exacta. It was also a record fourth victory in the race for Brown, following Dayatthespa (2012), Rushing Fall (2018), and Cambier Parc (2019) to break a tie he held with Jimmy Toner and John Veitch.

Brown watched the race from Belmont Park after winning the only other graded event nationwide on the Saturday slate, the Grade 2 Sands Point Stakes, with Fluffy Socks. He entered Shantisara off a win in the Sept. 18 Jockey Club Oaks Invitational Stakes at Belmont on the heels of an Aug. 14 Grade 3 Pucker Up Stakes score at Arlington International Racecourse.

"She's a monster right now," he said of the filly. "She has been training out of her mind. I'm so proud and appreciative of the ownership group with Michael Dubb, Sol Kumin, and Bob LaPenta that we took a patient approach. They didn't push me into a big race at Saratoga with her and we went to Arlington instead of tackling the big races at that point, which was important for her."

Technical Analysis led the field of nine through fractions of :23.91, :48.63 and 1:12.78 under mild pressure from favored Empress Josephine, with Shantisara tracking third as Burning Ambition raced a close fourth. As the field turned for home, however, Shantisara wasted little time wresting control.

Prat has been aboard Shantisara for her three consecutive victories for Brown. Shantisara returned $7 on a $2 win ticket.

"Flavien gave her a great ride," Brown remarked. "He gets position and gives you a chance to win every time."

"She made a really good move around the turn—she came really handy around the turn—sand when I asked her to make a move she responded well," added Prat, who also rode Blowout for Brown in the First Lady.

The Brad Cox-trained Burning Ambition finished third, 1 3/4 lengths behind Technical Analysis. The order of finish was completed by Nicest, Queen Goddess, Closing Remarks, Cloudy Dawn, Flippant, and favored Empress Josephine. Lady Speightspeare was a late scratch after acting up in the gate.

Empress Josephine, racing with blinkers for the first time, competed on a week's rest after a third-place finish in the Oct. 9 First Lady.

Shantisara, bred by Oliver Donlon, is the lone winner from three foals produced by the late Dalakhani mare Kharana. Saturday's score increased her earnings to $788,108 with five wins and two seconds from nine starts.

"We won two big races today with modestly bred horses," Brown said. "It goes to show that when these horses come into our program, it doesn't matter who they are or who they're bred by. We get them into the program and allow them to develop, and this is another reward for our hard-working stable." -with Bob Ehalt