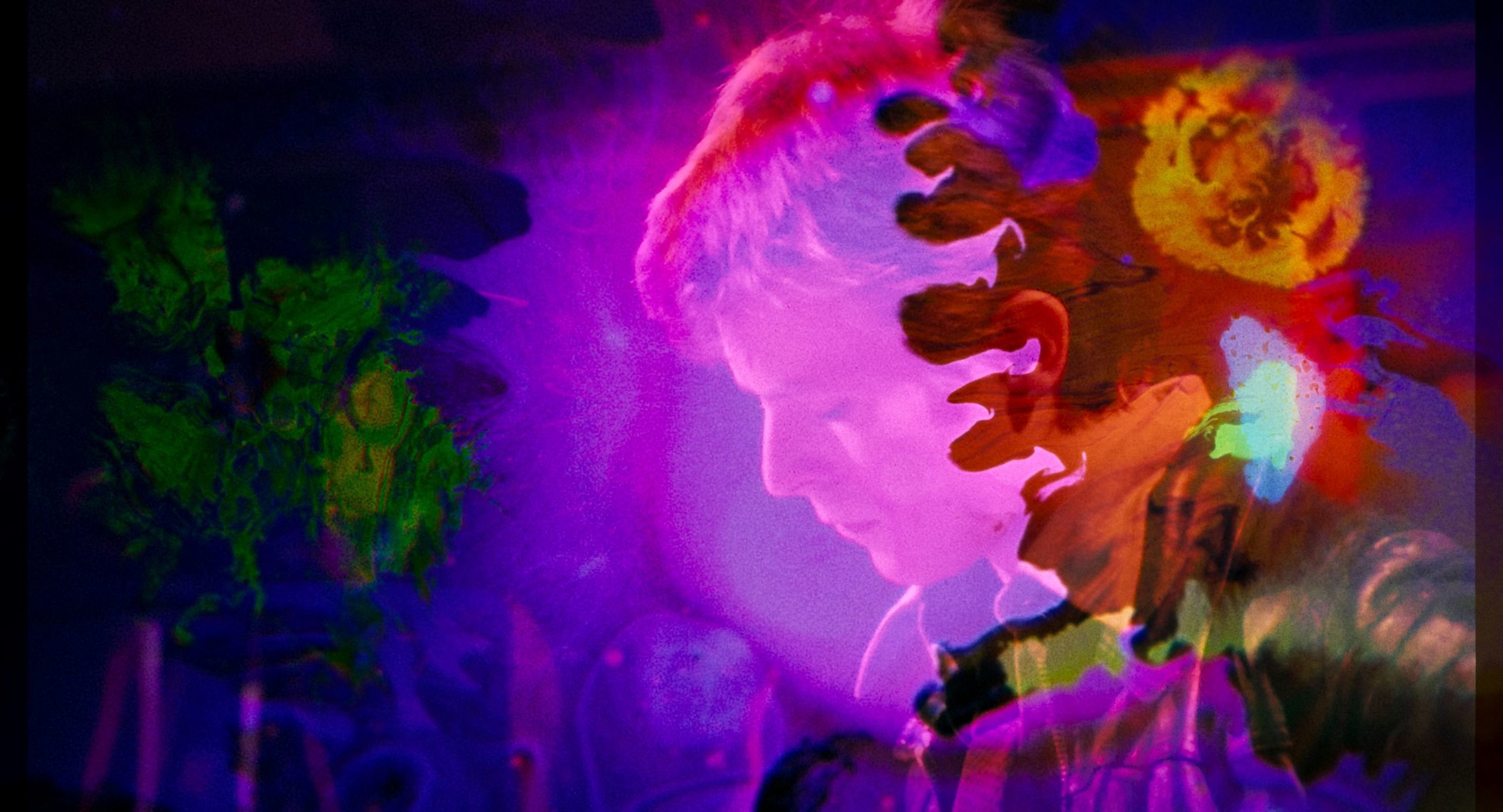 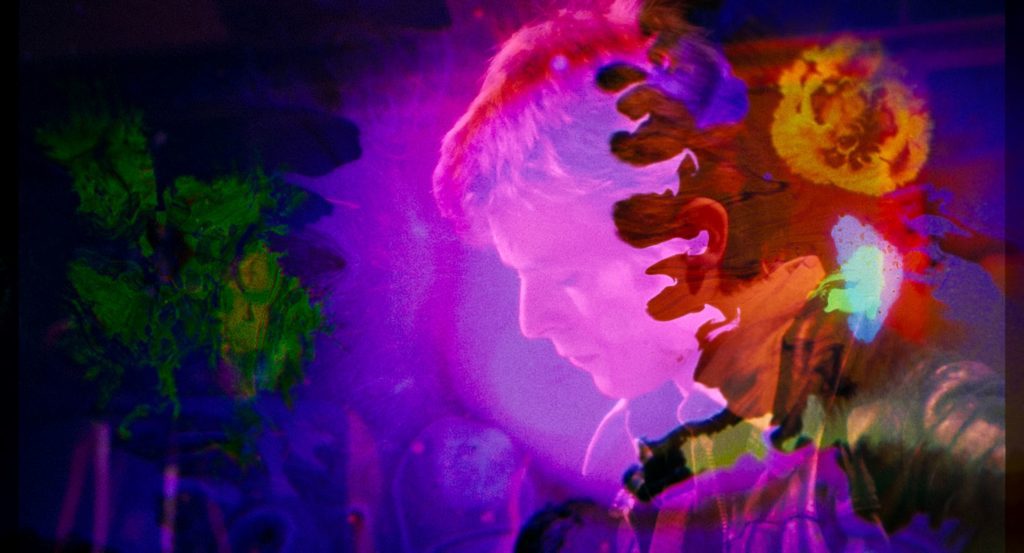 It’s easy to forget in today’s world of hyper-luxury multiplexes and tiered ticketing systems that IMAX releases of narrative films are a relatively new phenomenon. When I was a kid– all the way back in the hoary days of the 1990s– IMAX lived almost entirely inside of science museums, offering visions of outer space, or the depths of the ocean, or some other impossibly vast subject that can only be done justice on a screen the size of a building. Though released in the age of the standard-issue IMAX blockbuster, Brett Morgen’s new documentary Moonage Daydream feels more of a piece with this earlier form of IMAX filmmaking, and focuses on a subject every bit as cosmic and overwhelming: the life, artistry, and phenomenon of David Bowie.

Though Moonage Daydream is, at its core, a chronological narrative of its subject’s life, this is far from a conventional rockumentary. Bowie is introduced, as he must have seemed at the time, as an alien arriving fully formed on earth, with footage from D.A. Pennebaker’s Ziggy Stardust and the Spiders from Mars intercut with clips from Metropolis and A Trip to the Moon and This Island Earth. The story is narrated entirely through vintage television interviews, with Bowie alternately opening up to and deliberately confounding the likes of David Frost and Dick Cavett (the fact that we only ever see Bowie speak on a TV screen adds an additional layer of postmodernism, framing him as a sort of Max Headroom/Brian O’Blivion figure). Though a handful of biographical touchstones are highlighted (most notably his fruitful Berlin-based collaboration with Brian Eno and his 1992 marriage to supermodel Iman), Morgen is less interested in tracing the life of Bowie the man as he is in the creative impulses that propelled him through the decades and across countless genres, media, and personae. Bowie was, after all, a man of many masks; with this film, Morgen seems to be asking if it’s possible, by placing them in mosaic, to discern the artist’s true face. 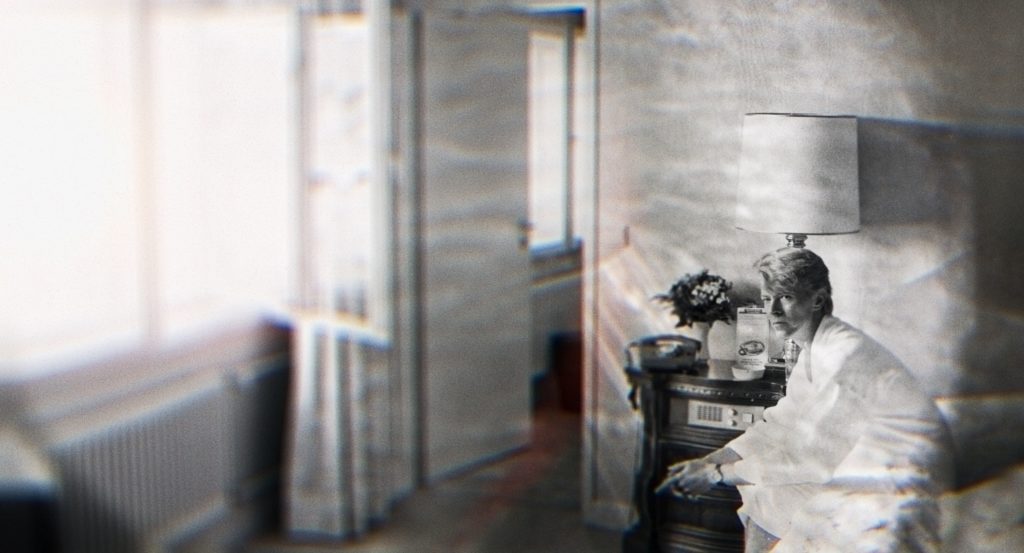 With its constant barrage of overlapping images– of Bowie and otherwise– Moonage Daydream occasionally recalls a similarly kaleidoscopic recent rockumentary: Todd Haynes’ The Velvet Underground. But where Haynes appropriates the signature splitscreen of Andy Warhol to contextualize the legendary New York group within the artistic community that produced them, Morgen almost does the opposite: he recontextualizes a half century of art and culture within the world of David Bowie. Bowie was, of course, a cultural magpie, weaving his various sounds and personae from bits and pieces drawn from b-movies, obscure records, occult texts, and whatever else caught his fancy. In compiling materials for his film, Morgen seems to have gone back to the source, compiling these disparate influences and repeating the alchemy to conjure a sort of Franken-Bowie. Fans of Bowie’s work will delight in spotting the myriad Easter eggs, and the unfamiliar might finally see what all the fuss is about.

To that later point, Daydream also reminds me somewhat of a wildly different musical biography: Baz Lurhmann’s Elvis. Like Luhrmann, Morgen is less interested in reheating the facts of Bowie’s life (there are books and VH1 specials for that) and more interested in capturing the feel of the music– of how it must have felt for an unprepared world to hear encounter this strange man for the first time. Like Luhrmann, Morgen places an emphasis on the fans at Bowie’s performances, augmenting the performances with shots of screaming audiences and groupies both female and male. Elvis, of course, represented the first volley of the sexual revolution, bringing to light the primal urges kept under lock and key during Eisenhower’s America. What made Bowie so remarkable, on the other hand, had less to do with sex than with gender. Bowie didn’t invent glam rock– Marc Bolan probably got there first, and both owed a debt to the Velvets and their Warhol Factory comrades– but he’s the one who turned it into a lifestyle that could be enacted in one’s day to day life; the euphoria on those fan’s faces is the realization that they could do that too. Bowie was one of the first public figures to go on TV and speak frankly about sexuality and gender performance, and even if the sincerity of some of those statements has since been debated, at least he was making them. We’ve come a long way in our understanding of gender in the decades that followed, and the impact of Bowie and his followers can’t be ignored. 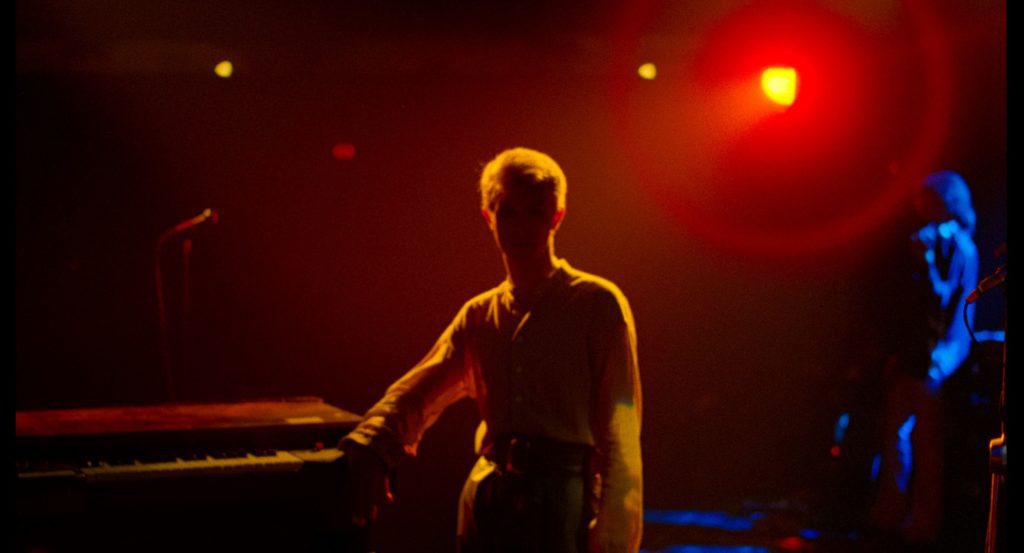 And anyway, what does a word like “sincerity” mean with regards to such an artist? Bowie was, after all, famous for his chameleonic shifts in sound and vision; “I always seem to collect personalities,” he tells an interviewer at one point. Indeed, Morgen makes something of a running gag of Bowie’s repeated insistences that he’s giving up the act and going straight, only to reveal what is clearly yet another character (did anyone ever think the “real Bowie” was the blue-and-brown-eyed soulboy of Young Americans or the gentleman cyberpunk of Tin Machine?). But Morgen argues that this act of shedding his skin was less a front than the very essence of the man. Bowie’s aesthetic nomadism extended far beyond music; as the film highlights, his creative impulses drove him toward painting, poetry, experimental video art, and acting on both stage and screen (the footage here of his starring turn in a West End production of The Elephant Man is particularly revelatory), to say nothing of his spiritual dabblings, which ran the gamut from Buddhism to Thelema. Moonage Daydream is the story of a life, but it’s also a grippingly effective portrait of creative restlessness, and anyone who has ever pursued a muse of their own will likely be moved to tears. Even as a young man, it seems as if Bowie was racing against the clock; as he muses late in the film, “I hate to waste days.”

Of course, these words can’t help but feel haunting from today’s vantage. David Bowie released his final album, Blackstar, on his 69th birthday, January 8, 2016. He died of liver cancer just two days later, in what in retrospect feels like one final performance in its own right (the event is broached only obliquely in the film through footage of an asteroid hurtling away from Earth, but its meaning is unambiguous). I was working at a record store on that day, and, inevitably, a customer came in asking for “the best place to start.” My coworkers and I were at a loss; how do you convey such a multifaceted artist with a single disc? (Suggesting a Greatest Hits album, of course, would have been cheating). The truth, as Morgen brilliantly illustrates, is far less complicated. All of Bowie’s faces– Ziggy Stardust and the Thin White Duke, the Elephant Man and the Goblin King, Major Tom and Lazarus– are all one and the same, aspects of the single alien being who left our planet too soon, but gave us a truly phenomenal body of work to make our way through. There probably isn’t a bad place to start (well, maybe a couple), but if Moonage Daydream had been available that day, I might have just handed that customer a blu-ray.

Liked it? Take a second to support BOSTON HASSLE on Patreon!