Reach For The Moon: Queen’s horse to miss the Derby at Epsom 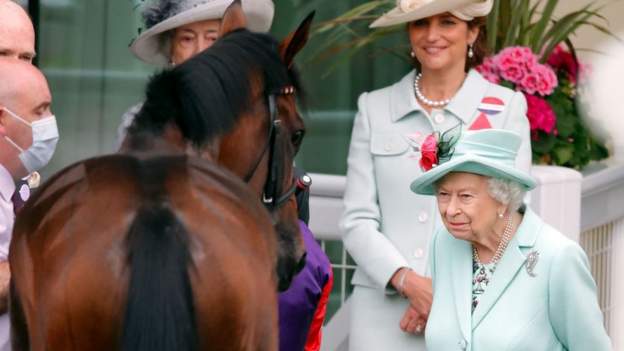 Reach For the Moon, owned by the Queen, is to miss the Derby at Epsom next month as the colt searches for full fitness following injury last season.

The horse, trained by John and Thady Gosden and the mount of Frankie Dettori, was third favourite.

The Queen has never won the Derby and this year's race on 4 June is part of her Platinum Jubilee celebrations to mark 70 years on the throne.

Reach For The Moon was about an 8-1 chance for the race.

The colt, winner of the Solario Stakes at Sandown in August 2021, ran five times last year but his season was curtailed by an injury on the gallops.

John Gosden told the Racing Post he would not contest the Classic at Epsom.

"Following a setback last autumn, Reach For The Moon has been given all the time and care he requires in his training programme," said Gosden.

"We had planned to run him in the Dante Stakes at York next week. However, in the best interests of the horse we have decided that this race is coming too soon for him.

"Consequently, he will not run in the Derby and will be pointed towards Royal Ascot."

Luxembourg, trained by Aidan O'Brien, is around the 3-1 favourite after finishing third behind winner Coroebus in Saturday's 2,000 Guineas.