Today’s poetry news roundup takes a look at the poems written by the poet laureate and the Scottish Makar in honour of Queen Elizabeth II.

Titled “Floral Tribute”, the poem has been written via the metaphor of the name of one of the favourite flowers of the late Queen. The flower is the Lilly of the Valley and is a flower that featured in the coronation bouquet. The first letter of each line of the poem, across both verses, spells out “Elizabeth.”

Armitage, who has been the poet laureate since 2019, said that he wanted the poem to have a personal touch and be one of condolences but without being too intrusive. One of the lines in the first stanza of the poem reads:

Speaking about his decision to use the acrostic technique in his poem, the poet explained that Elizabeth is a lovely name but something that the Queen probably didn’t get to hear very much as everybody was required to preface it with an appropriate title. He wanted the poem to be something that was a little distanced from the commentaries and language that people will have already heard.

He says that he did spend some time staring at a blank page before he was able to produce the idea for the poem. Whilst he had ideas in the past of what he might write, he felt that these were no longer the right thing. 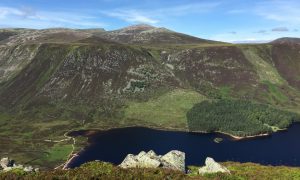 Kathleen Jamie, the Scottish Makar, or national poet, has penned a poem that was inspired by Lochnagar Munro, located near to Balmoral Castle, to mark the death of Queen Elizabeth II,

Jamie felt it was important to write something due to the occurrence of this extraordinary event and to commemorate the place where the Queen passed away.

The focus of the poem is Lochnagar, a 3789-foot mountain that can be found on the Balmoral estate. The mountain has been a popular walking spot with the royal family dating back to the days of Queen Victoria, who purchased the estate in the 1850s. It is somewhere that local report having seen the queen and other members of the royal family whilst they themselves were out and about in the area. It is also a very popular location to spot deer.

The Old Man of Lochnagar was a children’s book written by the then Prince of Wales during the 1980s that told the tale of an old man living in a cave under the mountain. The book was sold for charity.

The poet said that she was inspired to write the poem, which was inspired by the landscape that the Queen is known to have loved so much. She wrote it in the old-fashioned form in order to highlight the values of tradition and constancy that were so admired in the Queen.