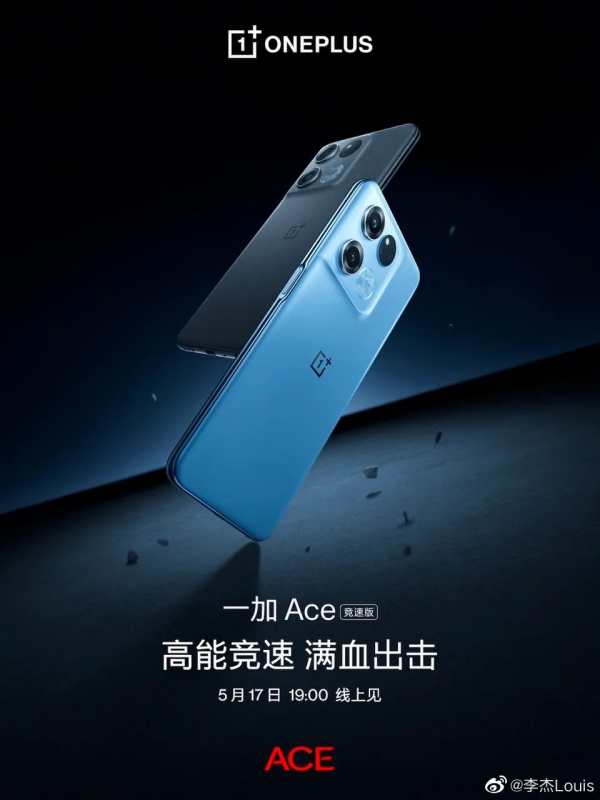 OnePlus has officially confirmed the upcoming OnePlus Ace Racing Edition smartphone. Last month, the company announced the Ace smartphone, and now it’s set to launch in China on May 17, 2022.

The Chinese website Weibo confirms the launch as it teases the design and some key specifications of the OnePlus Ace Racing Edition.

OnePlus Ace Racing Edition will have different specifications and designs as compared to the OnePlus Ace, which was launched in India as the OnePlus 10R.

The Camera Module, In Terms Of Design, Is Similar To The OnePlus 10 Pro

OnePlus has shown the upcoming smartphone’s design and also confirmed that the device will have a MediaTek Dimensity 8100-Max chipset.

The images show how the OnePlus Ace Racing Edition will look like. There will be different color options available, including Grey and Blue.

Currently, the device will be announced in China. It is unknown when the OnePlus Ace Racing Edition will be available in other regions. We can expect that the device will have a different moniker when it launches outside China.

According to the images, the camera module, in terms of design, is similar to the OnePlus 10 Pro. The Racing Edition will have a 64MP primary camera sensor and will accompany an 8MP ultrawide camera and a 2MP monochrome camera.

OnePlus Ace Racing Edition will have 6.59-inch IPS LCD Full HD+ display with a resolution of 1080 x 2412 pixels. There is a hole-punch cutout at the top left corner for the front camera.

The Racing edition will come with 65W fast charging, while the premium OncePlus Ace has up to 150W. The smartphone will be packed with a 4890 mAh battery. It is expected that the company will launch variants up to 12GB RAM and 256GB internal storage.

There will be a 3.5mm headphone jack instead of an alert slider. The power button and fingerprint scanner will be located on the right, and the volume up and down buttons on the left side.

Apart from this, OnePlus Nord 2T is expected to launch on May 19 at a Speed Games Event.