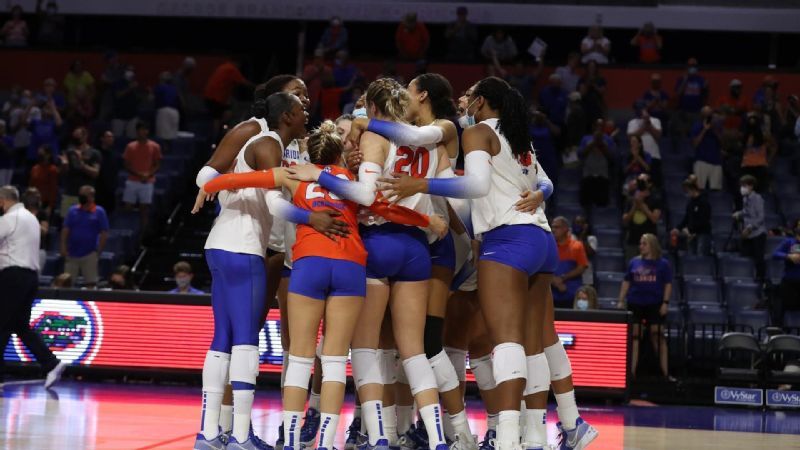 GAINESVILLE, Fla. - The 22nd-ranked Florida volleyball team (10-5, 4-1 SEC) closed out the series against the Ole Miss Rebels (12-3, 1-3 SEC) with a dominant three-set victory on Sunday afternoon in Exactech Arena.

The Gators took the first set 25-17 and followed with a commanding 25-13 victory in the second. Florida secured the final frame with a 9-0 run over the final stretch to win 25-17.

Marlie Monserez led the Gators to a .349 clip on the afternoon, recording 32 assists in the three-setter.

The Gators were a force at the net, recording 13.0 blocks while holding the Rebels to a .040 clip. Beason and Dooley led the way, recording six blocks apiece - that mark tied Beason's career-high mark. Forte and Hall each registered four blocks on the afternoon, while Ceasar round it out with three.

Trinity Adams led the way behind the service line, recording two aces in the match. Beason, Ceasar and Hall each added one apiece.

The Gators are back in action next weekend, when the team travels to LSU to take on the Tigers in a two-match series beginning on Oct. 9.

Ole Miss took the 1-0 lead in the first set, but it was the last lead the Rebels saw, as Florida pushed ahead and didn't look back. The set was within two at 9-7, but the Gators strung together a 6-2 run to take the 15-9 lead into the media timeout. Florida took as large as an eight-point lead at the 19-11 mark, but Ole Miss cut its deficit to four after a 3-0 run. The Gators closed out the frame with a 6-3 run to go up 1-0 in the match.

With the Gators down 3-2 in the second set, Florida sprung out to a 6-0 run behind the serves of McKissock to force an Ole Miss timeout. Out of the break, UF continued to build its lead, gaining the 10-point advantage at the 20-10 mark. The Gators cruised to the 25-13 victory thanks in part to three Ceasar kills and a Beason slam over the final five points.

The third set was back-and-forth from the start, with neither team holding more than a three-point lead. Florida took the 15-14 lead into the media timeout, but out of the break Ole Miss took the 17-16 advantage. Down one, the Gators went on a 3-0 run to take the 19-17 lead and force the Rebels to use their first timeout of the third. Florida continued to roll out of the break, closing out the match on a 6-0 run thanks to the play of Hall behind the service line to move to 4-1 in the SEC.

"Six-straight sets with us playing as good defensively as we have played all season, doing so against a very talented offense. "