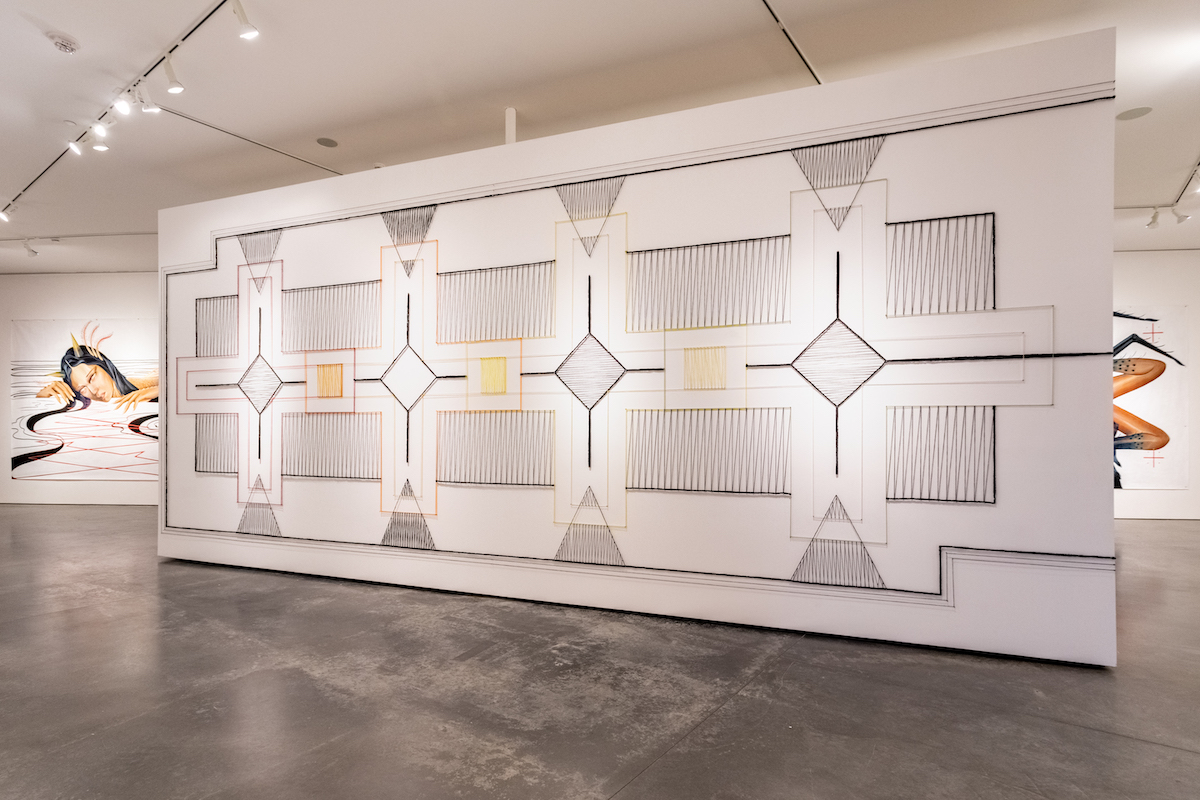 “I firstly create work for my people, for Diné,” said Chacon as we walked through the exhibition just before it opened. “I am thinking about the survival of our culture. So much of colonization, of Christianity, and of academia has silenced the ability to push these ideas forward. It does not get pushed forward unless people come and see it and witness it and contemplate it.”

For over 20 years, Chacon has been creating public art. Born in Gallup, New Mexico, in 1980, she grew up in both Chinlé, Arizona, on the Navajo Nation and in Corrales just north of Albuquerque. The murals she paints serve as reclamation of the spaces they inhabit, an act she sees as part of her role as a future ancestor. They honor and worship Brown women, another element that is essential to Chacon’s ethos as an artist.

“I want to see Brown women, big. I want to see those representations exist,” she said. “Throughout time the Brown woman has not been celebrated. We can go to Europe and see these beautiful sculptures of European women and their bodies; we celebrate that figure and that presence. We haven’t done that for Brown women. I think in time it will change, and maybe I am a part of that change.”

From Diné goddesses to community leaders, Chacon depicts Brown women in states of sublime grace, like the portrait she created honoring Dona Maclovia Zamora — a traditional herbalist and curandera (healer) — who for decades has created remedies in the Barelas neighborhood of Albuquerque. Chacon explained, “I have to understand what public my pieces are going to serve, and who is going to steward them. How does the imagery elevate or uplift the public that ultimately has to care for the work?”

Chacon thinks of her works as “urban interventions.” She’s okay with their impermanence; that murals aren’t going to be preciously preserved. They’re about the messages they portray, and the way they augment the neighborhoods they decorate. “When you’re confronted with art, it’s permission to think and it makes you engage with your landscape and in your community in a different way,” she said.

In SPECTRUM, Chacon adapts her mural process to fit a museum setting through large-scale acrylic works. Each one is over nine feet tall, and between 10 and 12 feet wide, capturing characters and stories from Diné creation myths in saturated color palettes that feel ethereal and earthly at the same time. “I feel the enormity makes them unescapable, and confrontational. I want to confront people with beauty and pride and complexity.” The exhibit includes three billboards on the west side of SITE which feature murals Chacon has made in Albuquerque and Mora, New Mexico, and Chinlé, Arizona, three places the artist feels strongly connected to.

She created five of the eight paintings in the exhibit over the last six months but said the process of bringing them into existence has been happening over the last five years. “This is a body of work I have wanted to make for a really long time, based on storytelling. I haven’t seen a lot of illustrations of our creation stories,” she told me. “We know so many stories, fairy tales, and mythologies from other cultures because we have an illustrated understanding and we follow that, especially as young children.”

The work “Asdzáá Nádleehé Blesses Herself in Front of the Sun” (2022) in SPECTRUM focuses on the story of Changing Woman, a deity whom the Diné people see as their grandmother and the goddess who created all humankind. It shows a Brown woman cradling herself in a golden glow of sunshine, floating on an oceanic turquoise background, as little piles of corn pollen pour down on her. This storied moment echoes through Diné ceremonial practices in the ritual of sprinkling corn pollen overhead. The characters in SPECTRUM’s paintings have little yellow spots on their crowns, signifying this ritual.

Other large-scale works in the exhibition include “Asdzáá Na’ashejé íí” (2022), which depicts Spiderwoman, the deity who taught Diné to weave. “Coyote and Badger Join the Earth and Sky and Make a Friendship for Life” (2022) shows the animals who have an important relationship in Diné creation mythology. “Our stories acknowledge all beings, animals, insects, people, and gods, and they are all central and important,” said Chacon.

SPECTRUM also incorporates wider Navajo beliefs, like the sacredness of the number four, which often appears in Diné weaving, in the four seasons, and four stages of life —  childhood, adolescence, adulthood, and old age. “Four Genders Were Born…” (2022) shows that Navajo culture recognizes more than two genders, born in their genesis story.

“The first four children that were made were two sets of twins. One was a boy, one a girl, one the embodiment of a boy in a girl, and one the embodiment of a girl in a boy. I find that entirely profound,” says Chacon. “I just see us now really struggling with sexuality beyond a binary, and that was something my ancestors already confronted, and not only confronted but accepted and wrapped into the idea of beauty and balance in the world.”

SPECTRUM includes a site map of locations where viewers can visit Chacon’s murals throughout New Mexico such as “Manifestations of a Glittering World” (2013), a mural in Santa Fe embedded with sparkly bits of mica; and “The River Runs Through It” (2017) in Española north of Santa Fe. Two site-specific pieces built with string, “Our Gods Walk Among Us” (2022) and “Don’t Whistle At Night” (2022) represent her exploration of the line and reference the Navajo’s strong connection to weaving. “It is important for us as Diné to continue to tell these stories,” she said. “All of these paintings together are about that relationship between land and world, and the spiritual world, and who we are as people.”