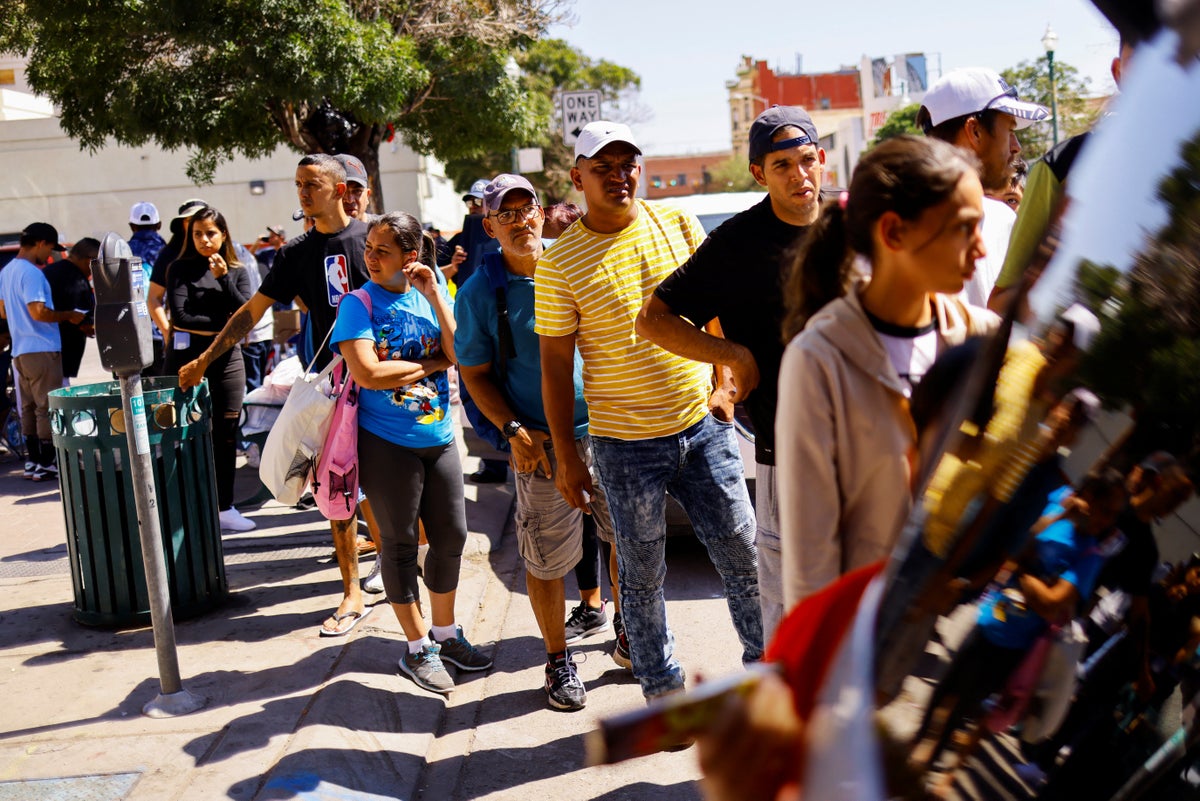 After Florida Governor Ron DeSantis arranged flights for 48 mostly Venezeulan migrants from Texas to Massachusetts last week, immigration attorneys and elected officials are demanding criminal investigations, and one Texas sheriff is probing allegations that the group was “lured” to planes with false information.

Delaware agencies, meanwhile, are preparing for another potential flight due to arrive on Tuesday near President Joe Biden’s beach home in Rehoboth Beach. The plane, however, appears to have been delayed, according to flight tracking services.

Florida Governor Ron DeSantis said at an event on Tuesday he “cannot confirm” another flight of migrants is leaving Texas for Delaware, though he criticised president Biden, who he said “created a crisis” at the border.

Governor DeSantis and his aides and Texas Governor Greg Abbott have defended sending migrants to Democratic-leading states and cities in protest of what they characterise as the president’s “open border” policy.

Lawyers for one group of migrants, who were moved to a larger shelter operation in Cape Cod on Friday, argue that they were deceived with false promises of financial aid and housing but were instead dropped off unannounced on Martha’s Vineyard last week.

Delaware officials say they haven’t been given any official notice over a potential plane full of migrants being sent from Republican states.

“The governor’s office has not received any outreach from either Texas or Florida,” a Delaware spokesperson said on Tuesday.

That would match the pattern of previous migrant dumps, when officials weren’t given warning before multiple buses of migrants were left outside of the vice-president’s house in Washington.

The much-hyped migrant flight today from Texas to Joe Biden’s vacation home in Delaware appears to be delayed.

According to flight tracking data, the plane designated for the flight, whose ultimate destination is the Georgetown Delaware Coastal Airport, has not yet left Texas.

Right now, the craft appears to be in the first leg of its journey, from Longview to San Antonio, Texas. According to the original manifest, the flight was already supposed to be in Delaware by now.

The Florida government has declined to confirm the flight, let alone offered public updates on it, but some critics have speculated that the controversy surrounding the migrant transports may be behind the delay.

“It appears that Ron DeSantis is having trouble rounding up more victims in his latest kidnapping spree,” Florida attorney Daniel Uhlfielder, founder of the group Remove Ron, wrote on Twitter on Tuesday. Word has spread that his maps and brochures are all lies. The candyman got caught.”

Here’s our report from Alex Woodward on the brochures he’s mentioning.

Migrants were given brochures with false promises of aid. Who made them?

People seeking asylum in the US were handed official-looking documents before boarding flights to Massachusetts booked by Governor Ron DeSantis, but the agency named on them did not make them. Lawyers are demanding answers, Alex Woodward reports

State of Florida has spent over $1m with migrant flight contractor

The state of Florida has spent more than $1.5m this month with the aviation contractor responsible for last week’s controversial Martha’s Vineyard migration flights.

On Monday, the company was paid $950,000, and a company craft was shown headed for Delaware on Tuesday, after Republicans hinted that Joe Biden’s home state could be the next site of a surprise immigration drop off.

A sheriff in Texas has opened an investigation into whether a group of migrants were “lured” on board last week’s flights from San Antonio to Massachusetts.

The flights, widely derided as a political stunt engineered by Florida’s Republican Governor Ron DeSantis against Democratic “sanctuary” policies, have faced international scrutiny following reports that migrants and their families were deceptively collected into planes out of state after seeking asylum in the US.

Bexar County Sheriff Javier Salazar’s office announced on 19 September that his office is working with “attorneys who are representing the victims as well as advocacy organizations regarding this incident.”

Alex Woodward has the story.

Bexar County Sheriff Javier Salazar says migrants ‘have every right to be where they are, and I believe they were preyed upon’

Biden taunts DeSantis over reported migrant flight to Delaware: ‘He should come visit, we have a beautiful shoreline’

President Joe Biden responded to reports that Florida Gov Ron DeSantis may be sending another plane of migrants to the northeast, with the latest flight scheduled to arrive in Delaware near the US president’s home.

In unscripted remarks to reporters after speaking on campaign finance, Mr Biden goaded Mr DeSantis over the political stunt.

“He should come visit, we have a beautiful shoreline,” Mr Biden told reports when asked to respond to Mr DeSantis’s latest gambit.

President Joe Biden responded to reports that Florida Gov Ron DeSantis may be sending another plane of migrants to the northeast, with the latest flight scheduled to arrive in Delaware near the US president’s home.

The migrant flights and bus trips from Florida and Texas to liberal locales are controversial for a number of reasons, not the least of which was the large number of children on board.

By The Independent’s count, over a dozen kids were aboard the transports.

Here’s our look at how children got ensnared in the immigration stunts of governors Ron DeSantis and Greg Abbott.

Florida and Texas migrant transports moved over a dozen kids, including one-year-old

Texas alone has sent thousands of migrants to liberal cities

The White House is coordinating with state officials and aid groups preparing for the potential arrival of a plane with migrants sent from Texas to coastal Delaware near the beach home of President Joe Biden.

The flight, due to arrive on Tuesday afternoon, could mark the second flight within a week organised by Florida Governor Ron DeSantis’s administration to move people seeking asylum in San Antonio to northeastern towns.

“We are coordinating closely with state officials and local service providers who are prepared to welcome these families in an orderly manner as they pursue their asylum claims,” White House press secretary Karine Jean-Pierre told reporters.

Alex Woodward is following the story for The Independent.

Aid groups are ‘prepared to welcome these families in an orderly manner as they pursue their asylum claims,’ according to press secretary Karine Jean-Pierre

Florida governor Ron DeSantis tore into Joe Biden during an event on Tuesday. “He inherited a border that wasn’t like this,” Mr DeSantis said. “He has created a crisis.”

The Republican denied that the migrant flights he sent to Martha’s Vineyard were a “stunt” and called on Mr Biden to reinstate Trump administration policies like Remain in Mexico, which stranded tens of thousands of legally protected asylum seekers in squalid camps on the Mexican side of the border for months, where they were the targets of exploitation.

“The biggest stunt was Biden coming in as president and reversing Trump’s policies just so he could virtue-signal that he was against Trump,” Mr DeSantis said. “The impact has been devastating.”

Mr DeSantis also said he “cannot confirm” another migrant flight is headed from Texas for Delaware.

The Republican governor claimed Democrats were being hypocritical about the flights, when they have tried to downplay the challenge of the high numbers of migrants who have crossed the border this year.

“I didn’t hear any outrage about that,” Mr DeSantis said. “The only thing I hear them getting about is you have 50 that end up in Marth’s Vineyard. Then they get really upset. And I’m sorry, those migrants were being treated horribly by Biden. They were hungry, homeless, they had no opportunity at all.”

Later in the event, Mr DeSantis acknowledged that Florida itself hasn’t had much trouble with high immigration numbers, even describing migrants entering the state in mere “onesie-twosies”

“We’re not seeing mass movements of them into Florida,” Mr DeSantis said.

Delaware braces for a migrant flight of its own

Cities and states across the country have struggled to respond to surprise flights and buses full of migrants sent from Republican border states. Delaware could be next.

The governor’s office and community groups were preparing on Tuesday for an influx of asylum-seekers, after reports of a plane scheduled to leave Texas and land near Joe Biden’s beach home in Rehoboth Beach.

“Our teams at [Delaware Emergency Management Agency] and [Delaware Department of Health and Social Services] are working with community organizations and other partners to make sure that migrants who arrive here have the support that they need,” a spokesperson for governor John Carney’s office told Delaware Online on Tuesday.

Earlier this week, senator Ted Cruz singled out the president’s vacation home as a target for another migrant transport.

Florida Governor Ron DeSantis is currently holding an event in Manatee County to tout his budget and tax agenda, but there’s a chance he’ll address the growing scandal of the migrant flights his government funded to Martha’s Vineyard.

You can watch the live stream of the event here, and we will be monitoring for updates.