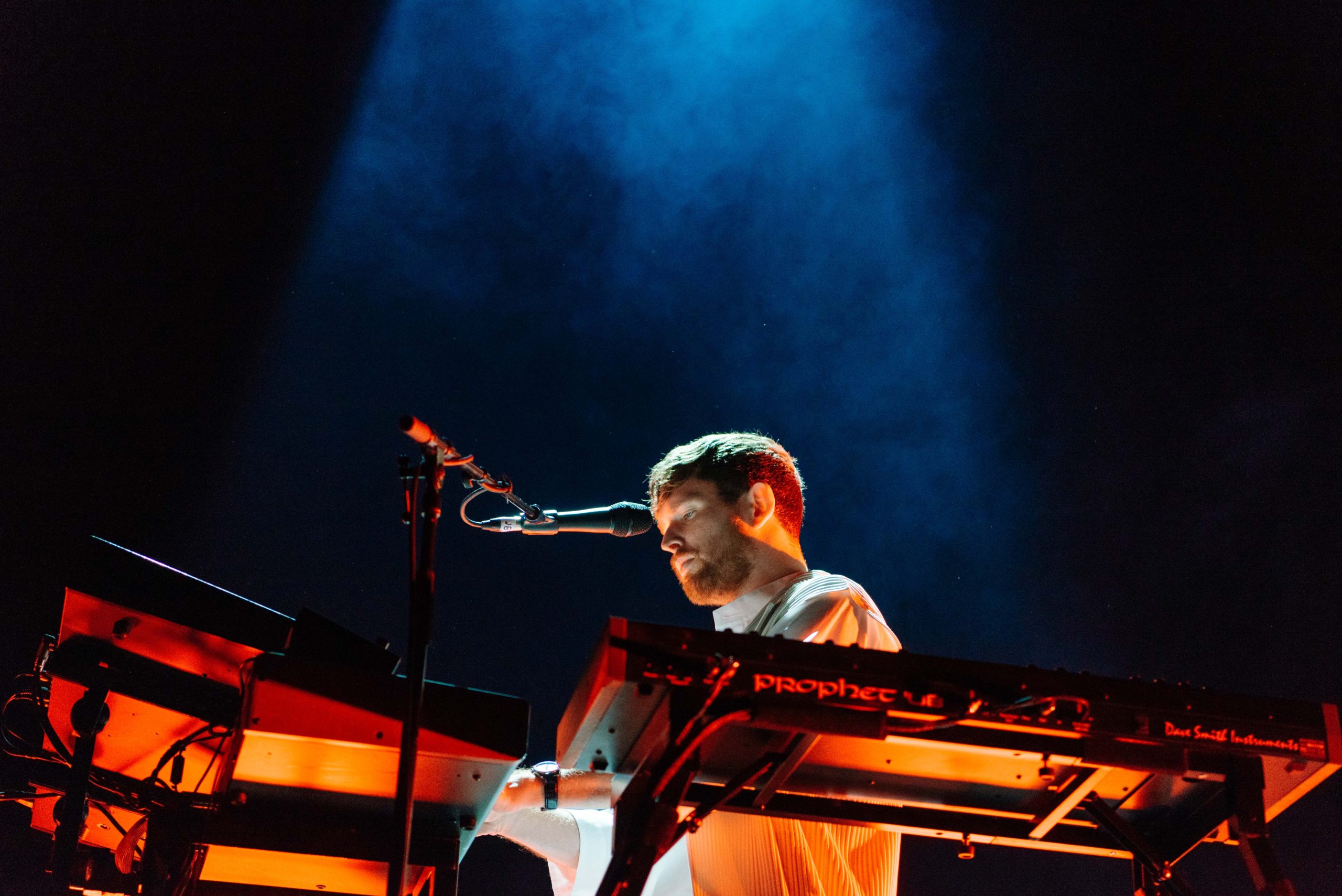 Keyboard wizard and spectral singer-songwriter, James Blake, transported the Wang Theatre audience into his own futuristic dimension on the almost-eve of his fifth album release.

James Blake floated onto the Wang Theatre stage in an ethereal white caftan. Seated on his own elevated platform but hidden behind an expansive keyboard, he was in his own world with fingers glued to the keys. As soon as the opening notes of the trancelike synth on “Famous Last Words” played, the audience was hypnotized, swaying in their seats throughout the dark theater. We were in Blake’s world now.

“Famous Last Words” is one of three singles off of Friends Who Break Your Heart, which was supposed to have been released a month ago. Due to COVID-19 delays of vinyl production, the album is now slated to arrive on October 8. This meant, as Blake announced, the Wang audience would be the first people in the world to hear some of the new material. One track off the album that Blake unveiled was “Foot Forward,” a buoyant song that provided an upbeat and hopeful contrast to the first three singles.

The audience lapped up every intricate treasure Blake handed out, hooting and hollering to such a degree that Blake eventually asked: “At some point, we’re going to have to make a decision about whether to sit or to stand.” The crowd instantly rose to their feet as the bass vibrated through the floor, causing audience members to indulge in vigorous head-banging and arm waving. The show was part EDM festival and part church gospel choir, complete with a call and response version of “Say What You Will” that had full audience participation.

The Wang Theatre itself added to the ambiance of Blake’s set. The historic venue, which was built in 1925, served as an elegant backdrop for his orchestral and spectral music. The domed, ornate ceiling and gold trim contrasted with the dynamic and high-tech light show on stage, resulting in something otherworldly.

The juxtaposition between the old and the new and between complex and sparse arrangements was a theme throughout the show. Blake effortlessly shifted from a ten-minute-long bass-thumping electronic freestyle into a heartfelt cover of Frank Ocean’s “Godspeed.” The layers of high hats disappeared and the fragments of white lights that flashed like static on the screen were replaced by a single spotlight. Blake sang the opening lyrics of “I will always love you, how I do” to an audience that held their breath with eyes closed.

Yet, Blake’s shifts from moments of extreme intimacy to bursts of energy weren’t jarring. Instead, the entire set felt cohesive and intentional. Each track melted into the next with long, dreamy interludes which included muddled samples and pulsating drums that made recorded versions anew. It was as theatrical as the theatre itself.

Still, Blake took the time in between songs to engage with the audience, even giving an honest soliloquy about the importance of being present and authentic before performing “Don’t Miss It,” which was clearly influenced by lyrics like, “I could avoid contact with eyes / I could avoid going outside.”

He also thanked his band, which was composed of a guitarist and a drummer each seated on their own elevated platform to the left of Blake. This decision to not put Blake in the middle and to put each band member on equal footing demonstrated how Blake thinks of himself and music. He’s almost shy, only coming out from behind his keyboard kingdom during an encore performance of “Are You In Love,” where he sang to the crowd from a standing microphone on the edge of the stage. Even the raucous crowd, which frequently exclaimed “marry me!” or demanded certain songs, didn’t provoke Blake’s calm manner.

Despite the wizard-like mystique of Blake’s stage persona, he is as real as they come. Each haunting note of his voice sounded even better than it did on the recordings and echoed off of the carved walls of the Wang Theatre. He talked about how, in the age of computer-produced music, everything the band did used live instruments. He posed to the crowd, “How many times do you go see a show and they just plug their laptop in?”

In addition to priming the audience for the upcoming album release, Blake folded in old favorites like “Retrograde” and “Life Round Here.” Every song was set to a different color palette of lights synchronized to the individual melody, successfully enveloping the audience in a pulsing dreamworld that reset each time the lights faded to black. To close out the night, Blake performed Roberta Flack’s “The First Time I Saw Your Face.” Bathed in a single spotlight, Blake appeared solo at the keyboard and with a gentle piano melody, soothed a tired audience, and ended the show on an intimate note.
Throughout his entire hour and a half set, James Blake enveloped the Wang Theatre in a rich soundscape that pushed at the boundaries of the electronic and R&B genres. What better way to celebrate the release of Friends Who Break Your Heart and, as Blake says, the joy of being authentically present.