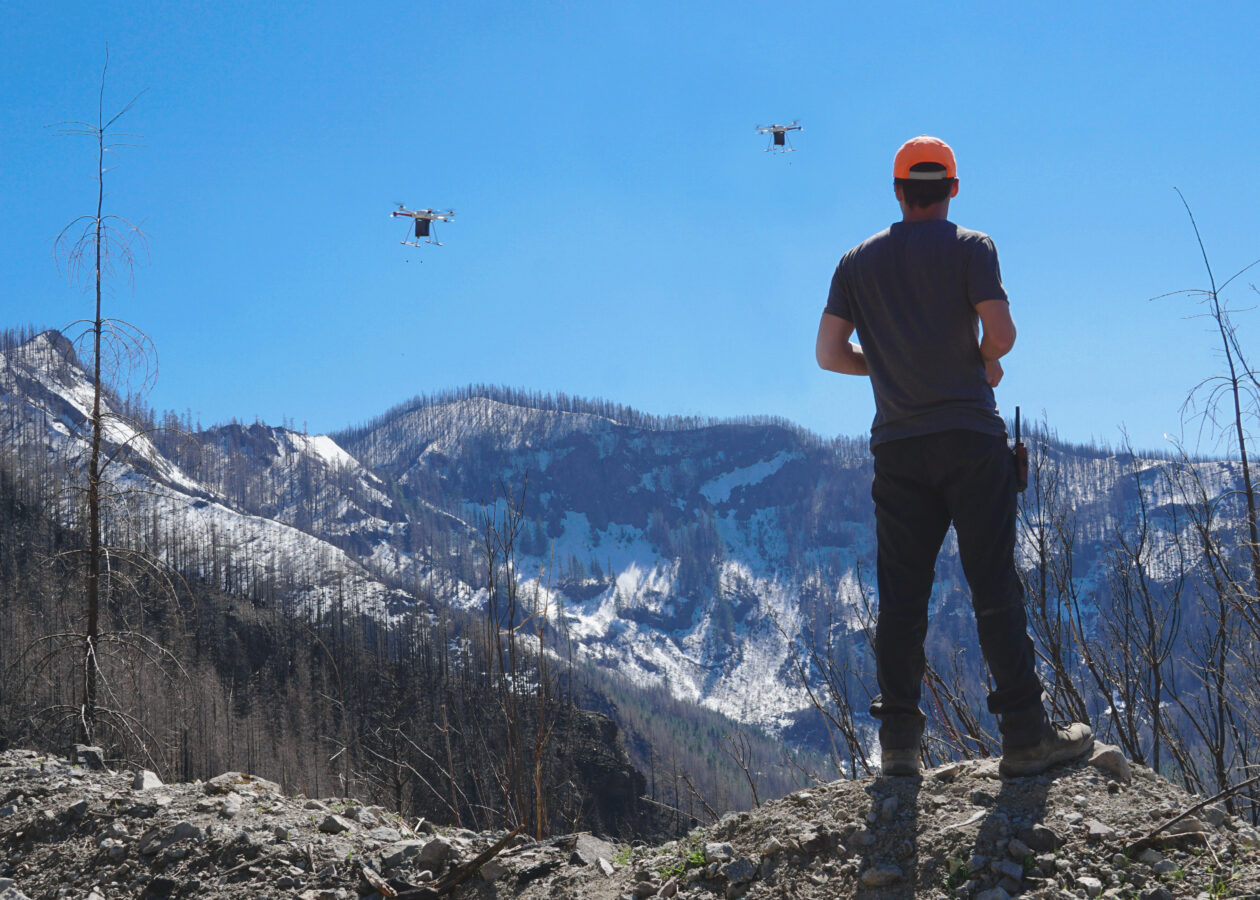 A swarm of giant drones navigates a scorched moonscape, tracing the rugged topography. The scene has a desolate, sci-fi vibe — but its reality is rooted in the terra firma.

The devices belong to DroneSeed, a Seattle startup deploying technology to help restore some of the millions of acres of forests that have burned in wildfires across the U.S. and beyond. The conflagrations include fires so intense that they don’t leave any live trees to provide new seeds or seeds in the soil, and so massive that they create barren islands far from seed sources. Left alone, the burns could sit as treeless grass or shrubland for years.

As another devastating wildfire season (hopefully) winds down, the company will be dispersing seeds this fall and spring over hundreds of acres in Washington, Oregon, California and Montana.

By using drones, the company can quickly disperse seeds in areas with fragile soils and no roads. They have reseeded thousands of acres since 2019.

DroneSeed is scaling up it efforts, scrambling to meet demand. They landed $36 million in new venture capital last year. In the spring, the startup announced a new partnership with the nonprofit One Tree Planted to help landowners pay for reforestation projects. The market is growing as carbon credits are being granted for trees a year or two after they’re planted, rather than decades into the future.

The idea of scattering seeds by air isn’t new, but DroneSeed was the first company to secure Federal Aviation Administration (FAA) approval to use so-called heavy lift drones for its targeted seed delivery. The startup, which launched in 2016, uses technology at every step of the reforestation process, from pine cone collecting to monitoring reseeded acres.

“It is very much a marriage of old technology and new tools,” said Kea Woodruff, senior operations manager for DroneSeed.

Its customers include many of the largest U.S. timber companies, tribal nations, nonprofits, government agencies and family-owned forests.

Susan Prichard, a research scientist with the University of Washington’s School of Environmental and Forest Sciences, said that DroneSeed’s approach “makes a lot of sense.”

“As we’re adapting to this warmer and often drier world, we really need to innovate,” she said.

In the months following a wildfire, the startup uses cameras and lasers to do aerial surveys of a landscape targeted for reforestation. It develops maps identifying the most hospitable areas for replanting and avoiding rocky, barren spots. It plots dead trees called snags and other obstacles for the drones to dodge.

DroneSeed creates an automated route for its custom-built drones to follow, though it also has a pilot onsite to help guide the devices. The drones measure 8 feet in diameter and can carry payloads of 55 pounds, which is enough to reseed about one-quarter of the playing surface of a football field.

The battery-powered drone can fly for eight to 18 minutes before it needs to return for more seeds and a new battery pack. DroneSeed has designed a truck with a diesel generator that can recharge the batteries. The team typically runs operations with three drones at a time, but is licensed to fly up to five at once.

But before launching that payload, there has to be something to plant in the first place — and that has been complicated by a global shortage of tree seeds.

DroneSeed is boosting those supplies by using its drones and high-resolution cameras to scout and survey for trees producing lots of pine cones. The company is focused on conifers, which includes fir and pine trees.

The pine cones are collected, kiln dried, and the seeds removed and cleaned. Some are X-rayed to check their viability and look for pests. A portion of the seeds are used for aerial planting, while others are grown into seedlings that are planted by hand.

To give seeds a fighting chance before they’re dispersed into harsh conditions, they are first placed into specially engineered, fiber-based pucks. Once in the environment, the pucks absorb moisture and expand — drying out is the most common cause of death for seedlings, Prichard said. The packets also include slow-release fertilizers and pest deterrents to aid the seedling’s growth.

While she sees the potential in reseeding, Prichard noted there are ways in which it can go wrong.

It’s important that the trees are not too densely planted, making them susceptible to disease, pests and future fires. The reforestation plan should keep changing climate conditions in mind, rather than trying to replace the forest that was lost. That means getting seed stock from slightly warmer, drier areas, she said, “since that’s where we’re headed.” Prichard is also hoping the startup will monitor plantings and adjust their approach as needed.

There are other companies using drones for reforestation. That includes Flash Forest, which is based in Ontario and has an office in British Columbia; the United Kingdom’s Dendra Systems; and Hawaii’s Terraformation. DroneSeed has raised the most funding of the four.

While there are more burned acres than current companies can keep up with, Meigs makes the case that DroneSeed offers the most complete solution among the startups.

“This technology is a game changer,” she said. “A private company focusing on scaling reforestation on all sides of it, both the rapid response as well as [producing] seeds and seedlings — there’s no one else doing it.”