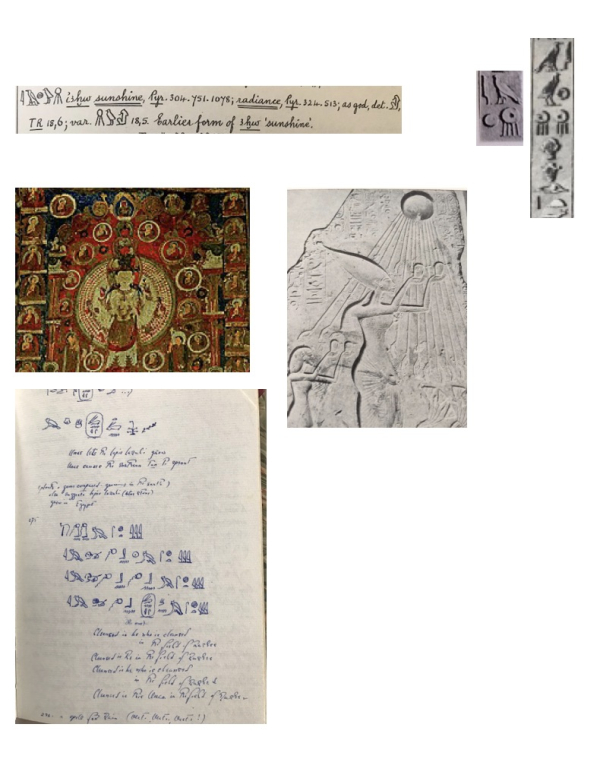 I left home because my older sister Barbara was killed in a car crash. We were close enough in age to have that twin-like sense of the sibling who is always there. In her absence I became her- or at least moved into the pattern of what she was doing, going away to college. I always think of the vision in Ennius

my sister my twin, I seem to wander and track and search for you, but cannot (find you)

I found myself in the New York of the 1970s. New York was a wreck in those days. A woman was found cut up in a garbage can a few blocks down Broadway my first week of school, the Health Department closed the cafeteria, and I went and got my own apartment on 112th Street- for $140.00 a month, the tuition was $2500.00 a semester and I lived on thirty dollars a week.

But in that context of things falling apart I found myself among remarkable people to whom I owe a great deal. At the table in the little library of the Columbia Classics Department I read Plato, parsing it out line by line with my Greek professor, the great papyrologist Roger Bagnall. That is where I learned about writing. Plato wrote with such economy, was so clean, as we used to say, never an unnecessary word, and used the devices of poetry like anacolouthon and isocolon in his prose. Roger started me studying hieroglyphs, sent me to work on papyri at the Brooklyn Museum, and sent me out to work on an archaeological survey in the Western Desert when I was around twenty, a profound experience that affected me for the rest of my life. Within weeks of my coming back from that first time in the desert my brother David was killed in a car crash driving down to visit me in N.Y.

I left, and went and lived on nothing, on the road, primarily in Africa, for two years. I was thinking about death and nature and language and eternity, an atmosphere that pervades the two prose poem/essays that I wrote below:

There is a clarity of light in the desert that articulates things very strongly. It changes from moment to moment, and with it the colors change, the colors and tones of the shadows and the rocks- from violet to blue to gray. One might say that this light enables one to see in a way that is not possible elsewhere. The light itself has a kind of purity, and for some this is why the desert is a holy place. The desert eats everything, desert nomads say. And one might say, if this is death, this stark beauty, I’ll take it. For the desert is not a static thing, a place, but a process that is ongoing across the face of the earth. The Western Desert was once an ocean floor, peopled with fish and crinoids and oyster shells, whose remains are thickly embedded in the vividly colored layers of sea clay sculpted into isolated outcrops by the desert wind. Once it was a forested plain, and the shells of trees, turned to red and brown shards of stone, lie heaped in places among the fragments of bone scattered over the ground like a fine covering of soft white snow. If everything- oceans and forests and all living things, ultimately become this pure land of rock and light, one might think, if this is death I’ll take it, I am willing to be part of the inevitable transformation of all things into this stark absolute beauty.

The Translation of Nature

Books in the running brooks

And good in everything

The great sea that surrounds us all is not death but life. We cannot see the radiant flow of animate minutiae that pervade the water, earth, and air around us. What we can see are the detailed symmetries of individual living things, and in these symmetries the underlying pattern that is the key to the mystery of eternal life. This hidden structure of life manifests in the Fibonacci lattices of growth that underlie the forms of plants and animals, and the dendritic mechanism of memory itself. The mind is a mirror, illuminating minute particularities even as it reflects in its very nature the universal flow.

The flow of radiolarians in the sea, shells and fragments left by drifting waves on the shore, masses of people drifting through airport corridors, rushing in waves toward departing planes. To capture these things is indeed to capture both beauty and insight as a bird in flight, to bring a sense of joy and motion to the intricate plethora of forms in nature, and to pass this vision on as a radiant gift to the world.

Plants and animals are spun on the same pattern.

To see the human form as a fibrous mass of roots touches on this profound truth: A lace-like pattern of nerves underlies the skin of both, raising the question- when did these parallel life forms diverge?

The seed is what is left of the plant,

But the same cannot be said of us: you cannot plant the bones of an animal

This human dilemma, how to bring back to life what remains,

has been universally solved by the book.

What is involved is a conjuring trick. The electricity of the mind runs along vivid lines of association through its thread-like channels of memory. Hieroglyphs are not cryptic, but synecdoche: the sketch of an animal suggests some aspect of its nature. This animal particular conjures in the mind not merely itself, but its suggestion of a quality observed in other things. The flamingo is the hieroglyph for red, and blood; the crocodile for rage, and lightning- terrifying hidden things that strike. Forever hidden in the sign is the potential. The letter is the seed of the word. The word is the seed of thought.

Thus the very bones of language have the power to bring back what is gone.

The eye is the hieroglyph not to see, but to create. The presence of the artist is implicit in this insight. Perception is the essence of creation. What eye first saw the world in translation? Who created the alphabet? The composite phrase itself supplies the answer: alpha, the head of a bull, and beta, house, a word that even today can simply mean a movable divided tent. These are the paraphernalia of herders in semi-arid lands, people to whom water is in motion: a wave. Is it a wave made by wind on the sea? or is it the wave-like line left on desert rock as the water left by passing rain evaporates? There is always something wistful in catching the fleeting thing and writing it down.

The fossil stands for the form. Language works in much the same way. That letters on a page are the remnant rags of things: fossils and bones whose fine symmetries yet contain the spark of life; that the page is on and of the earth itself, are truths that capture the magical essence of memory, of how it works, of what writing and representation are, and are for.

one can imagine standing on the shore of an ancient sea, picking up fragments of coral or stone and arranging these shapes with aesthetic delight on the beach- clearing the ground with the flat of a hand to make a smooth page out of dirt or sand, and letting aesthetic intuition create a thought, a storyline, with a fluid mix of suggestive objects. A fragment suggests a human hand (the hieroglyphic verb to give); another a face (the preposition upon), or the hoof of an animal (the sign to repeat, to do it again).

Thus random objects become signs in the magical glow of the mind, in the endless flow of luminous living things, including ourselves. The skull, the simple remnant of a human form- no more complex than a seed pod that has lost its meaning once the seed is gone- comes to mean death itself. Not death but the fear of death, for death is an idea that belongs to the illusion of the solidity of the world.

nothing of him that doth fade,

but doth suffer a sea change

into something rich and strange.

Above are prose poems I wrote as essays on the work of portrait photographer E.C.Warner, and the artist Michele Oka Doner

The Cambridge classicist Jane Harrison wrote in 1912, (to paraphrase from memory), “Always pay attention to the untranslatable word, for there you may rediscover the source of sanctity.”

To pursue a question about an untranslatable word:

What is the origin, hence original meaning, of the word Jehovah/Yahweh?

I offer an answer to this age-old question from my own observations: it is the hieroglyphic word yahw, the life-giving light that shines through all things.

This principle, the relationship between light and life, is deified in Egypt. Images in relief can be giant hieroglyphs. In this relief of Akhenaten the yahw hieroglyph, the sun streaming light, gives life to plants and people on earth alike. The rays of light are hands holding out the sign of life to everything that lives. It is the image of Avalokteshvara, he who looks down, touching every living thing with a thousand life-giving hands, open hands with eyes on them that see all the suffering of the world, that the see the reality of the world. In the Pyramid Texts these two concepts occur together where the hieroglyph is doubled in the cryptic phrase the brilliant light is in the heart of his eye. The hieroglyphic eye is the verb to create, associating the Yahweh concept with creation, with yahweh, light, as the creator, the eye that sees and shines at once. 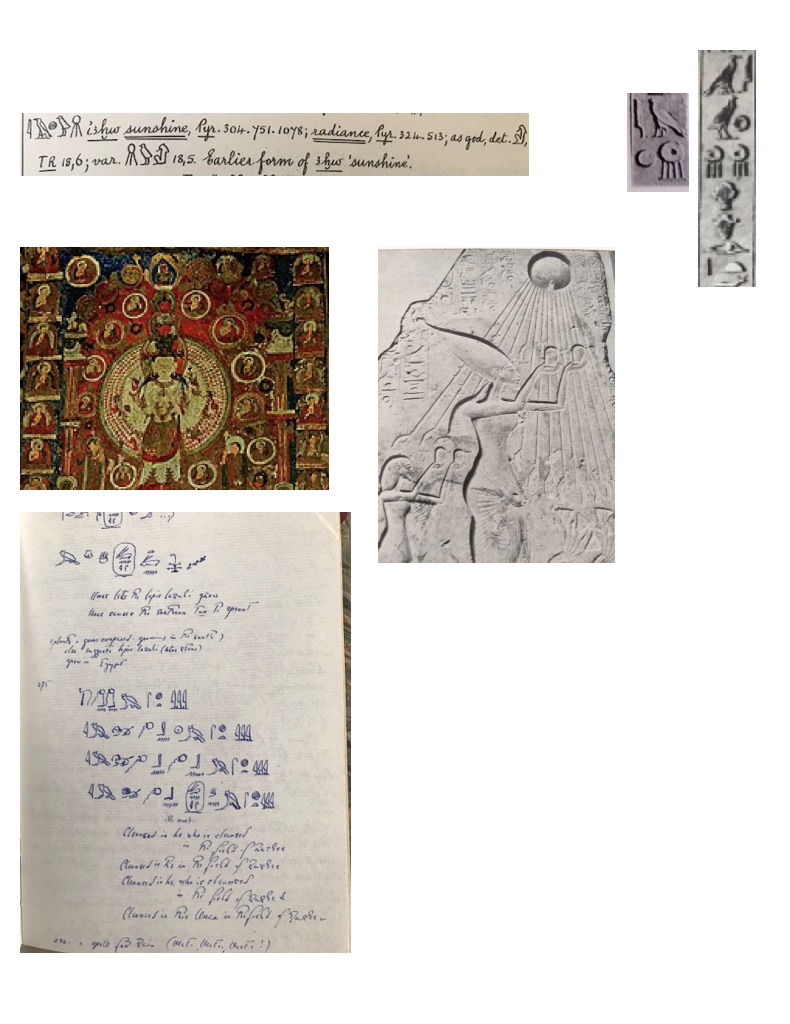 There is much Astronomy in Egyptian religious poetry. Here the soul as an infant (the word for which in hieroglyphs is moses) is washed in the field of rushes, the eastern stars at dawn.

Pure is he who is washed in the field of rushes

Pure is the light in the field of rushes

Pure is he who is washed in the field of rushes

Pure is Unis in the field of rushes

You are born of dusk with Orion

You rise with Orion in the Eastern Sky

And descend with Orion again in the West

The third with you is Sirius, purest of places,

Who leads along the fair paths of the sky

Through fields of celestial rushes

The soul rises as Orion.

The stars are fields.

The stars are blossoming 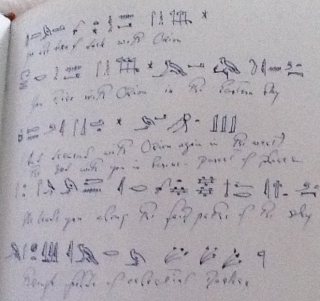 The stars are green 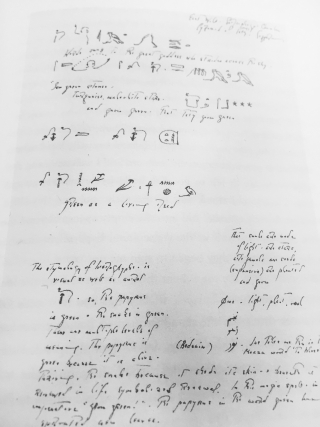 Green as a living reed

The stars are the souls of the dead, blossoming like plants in the sky.