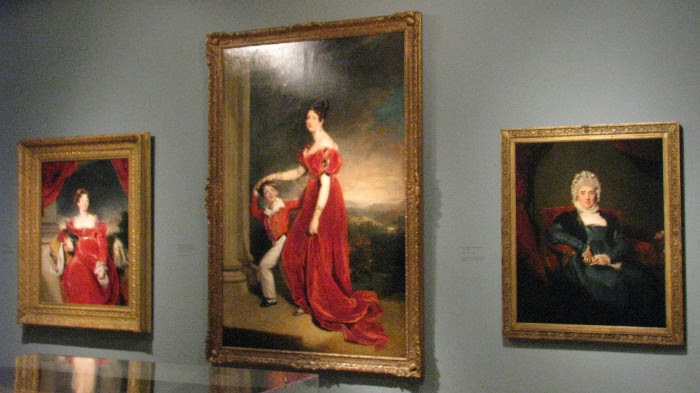 For years I've been trying to work out why the red much used by Thomas Lawrence in his portraits should look so vibrant and have remained in such good condition to this day.

This post is about a possible explanation involving a colour - Venetian Red.

Born in 1769 his talents found early recognition and he became something of a child prodigy among the fashionable crowd of the 1770s.

When he became the effective successor to Sir Joshua Reynolds after Reynold's death, he was able to command fees far in excess of other portrait painters and he made (and spent) a lot of money. He was knighted after painting the victors of Waterloo.

I first came across Lawrence in 2010 - at an exhibition of his portraits at the preview of the major exhibition Thomas Lawrence: Regency Power And Brilliance at the National Portrait Gallery  (There are 689 portraits by Lawrence listed by the NPG in their index of artists and sitters)

About Lawrence's approach to portrait painting and use of red

This is my Exhibition Review: Thomas Lawrence at National Portrait Gallery which summarises both his career and comments on his approach to portrait painting and his use of colour. I won't repeat the background here except for this comment 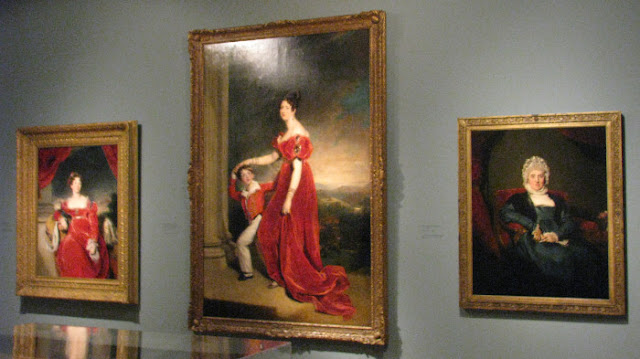 "(I) wondered why his paintings look so fresh and which sort of red he has used which continues to look good some 300 years later. The curator I spoke to confirmed that these these are some of the best looking portraits they've ever had on display and yet there's no or very little evidence of restoration or cleaning."

Besides being an excellent portrait painter, he very clearly knew a lot about how to use art materials to ensure a portrait painting had both impact and longevity.

Red is a colour which immediately attracts attention. Most of us know it is as a "come and look at me" colour.

The really odd thing is that while paintings by other artists of his era may look good, inspection up close shows that the paintwork has deteriorated in some way or other - or may just have changed colour. Especially if a colour which is frequently seen as prone to losing saturation.

By way of contrast, Lawrence's portraits all looked as if they'd been painted the previous year and the reds were all exceptionally vibrant and in good condition.

I was immediately intrigued as to how come his paint looks so good compared to other painters. I concluded it had to be something to do with how he mixed his paints and what he used for pigments and media - and maybe what he used for a varnish.

An article on the National Portrait Gallery website covers Lawrence's materials and processes.

Re-reading it a couple of sentences jumped out at me.

talk of the ‘Venetian secret’

in relation to the effects created by Titian, Veronese and other Venetian masters. I wondered if this was about an approach to painting - or about the use of a colour.

In 1821 Lawrence began patronising the young Charles Roberson (1799-1876), ‘Colourman to Artists and hair pencil maker’ and successor to Henry Matley at 54 Long Acre. Initially, Lawrence purchased materials to the value of £4.3s.6d, including Italian Pink, Venetian Lake and Vermillion in one or two ounce quantities, Italian chalk totalling six ounces and Mountain Blue, that is Azurite, totalling 19 ounces (about 550 grams); of these the Venetian Lake was the most expensive pigment at 6s an ounce (see Appendix for full transcript). (NPG article)

For those interested in the hoax referenced in the NPG article and perpetrated in relation to the "Venetian secret" read this 2008 article in the New York Times - Be an Old Master, for 10 Guineas

For those wanting to investigate Venetian Red further I suggest you read these various references to Venetian Red.

Clearly the colour is stable, permanent and resistant to UV - and was recommended by the 15th-century Italian painter and writer Cennino Cennini in his handbook on painting, Il libro dell'arte.

Venetian Red is an opaque deep red colour. An earth pigment, it was called Venetian Red after the quarry near Venice where the painter Titian sourced his earth reds. Buttery and vibrant artists' oil colour. Rated ASTM lightfastness rating: 1

He also appears to have favoured Indian Red but interestingly Cadmium Red does NOT get a mention in the article.

‘It should be varnish’d with the best Mastic Varnish…. The brush should be a soft flat brush and it should be pass’d evenly downwards and across the picture thus + The operation is however so simple, that any artist or picture cleaner knows perfectly well how to do it. The Mastic should be the purest picked gum dissolv’d in Turpentine.’ (see the last secyion of the NPG article)