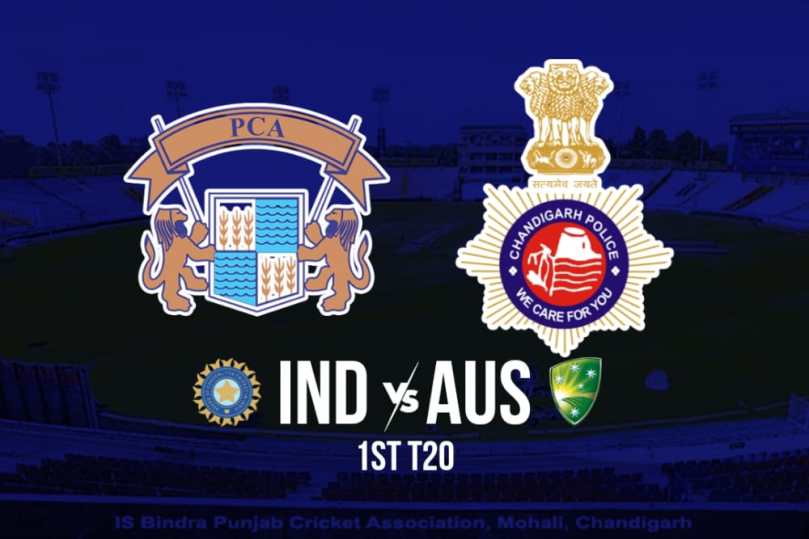 IND AUS 1ST T20: Chandigarh Police vs PCA:  The Punjab Cricket Association is set to host the India vs Australia T20 match in Mohali on Tuesday. The Chandigarh Police have been assisting them for such matches in terms of security for a number of years. And they have now made a big reveal stating that the PCA needs to make a payment of around 5 crores overdue for last eight years ahead of the series opener. Follow Australia Tour of India live updates with InsideSport.IN

It is important to mention that security is always an important part of any international cricket matches. With high-profiled players in both teams, there are chances of fans surrounding them at airports and hotels.

Hence, policemen are deployed to avoid any sort of chaos before and after the game as well.  Such kind of police deployment also happens in domestic matches, but to a lesser extent.

As per the report in the Indian Express, the issue of payment overdue was was brought about by SSP (traffic/security) Manisha Chaudhary with PCA officials on Saturday. “We have made security and law & order arrangements for the stay of both Indian and Australian teams in UT Chandigarh.”

“Also, the Punjab Cricket Association has been asked to make payment of outstanding dues of previous matches held in Mohali, for which security arrangements were made by Chandigarh Police.”

Indian captain Rohit sharma has arrived in the Mohali before the first T20i match between #INDvsAUS . pic.twitter.com/MOUueksZ1B

However, it is important to mention both India and Australia have reached Mohali for the first game. If Australia had their first practice session on Saturday, India will do so on Monday.

In all these, it is Chandigarh Police, who has been providing security to both the teams. Right from the time they arrived in the city, they have been assisting them. However, the Indian Express report further suggests that as per officials, there were only few security personnel deployed to take the visiting team to the hotel. The Australian team are staying put at Hotel Lalit.