IND-A vs NZ-A LIVE Score: Champman fights back with half-century, New Zealand A on 184/5 in third unofficial Test: Follow LIVE 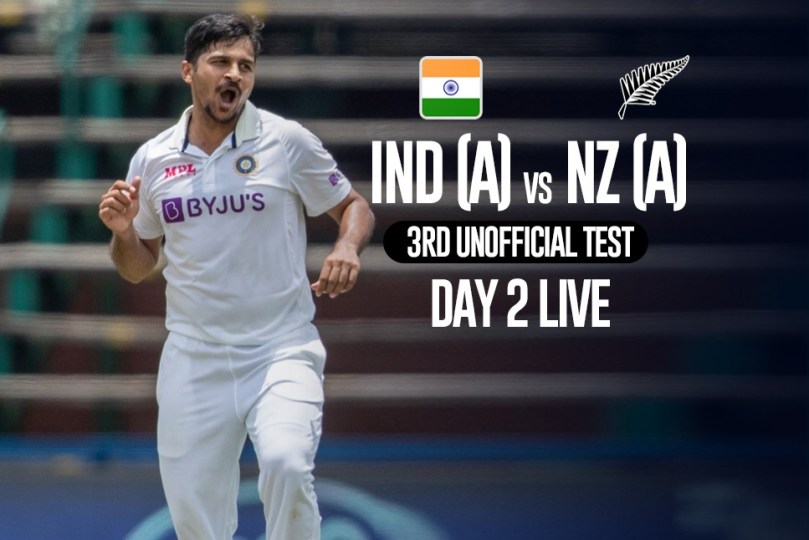 IND-A vs NZ-A LIVE Score – India-A NewZealand A 3rd TEST: India-A 293/10, NewZealand 184/5 at TEA: India-A pacers have derailed NewZealand-A innings. Mukesh Kumar and Rahul Chahar have scalped two wickets each while Shardul Thakur  has taken one in Bengaluru. Post lunch, New Zealand A have been led by Mark Chapman, who has countered India A bowlers with a half-century. They are currently on 184/5 at Tea. ON Day 1, India-A were bowled out for 293. Ruturaj Gaikwad scored a hundred for India on DAY 1. Upendra Yadav contributed with 76: Follow India-A vs NewZealand-A LIVE Updates on InsideSport.IN.

India’s Priyank Panchal won the toss and decided to bat first at the Chinnaswamy Stadium on Thursday.

AR Easwaran looked in good touch against the NZ bowlers. But the opening partnership did not last long as Panchal was out for 5 runs. At one point, they looked in serious trouble as India A were four wickets down quickly. They were 111/4 as Rajat Patidar (30) and Sarfaraz Khan (0) went back in quick succession.

Hence, there was a serious need for someone to stand up and deliver. It is at that juncture, Gaikwad delivered his A game under pressure. He took the attack to the opposition and played an counter attacking innings, which worked well.

It was not only Gaikwad, also wicket-keeper batter Upendra Yadav supported Yadav well on the crease. From 111/4, they took the game to 245/5 and brought India A back into the game.

After completing his ton, Gaikwad was out for 108 runs with the batter hitting 12 fours and two sixes in the process. The rest of the Indian A players in the lower order could not score much as Upendra was also out for 76.

An interesting Day 2 looms large with India A bowlers keen to start well in the morning. Some early wickets in the morning and the home team may well be right on the front foot on Day 2.