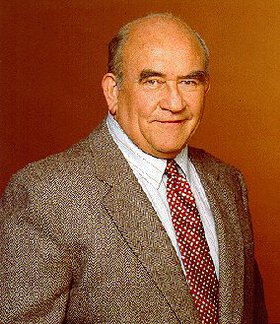 It is with great sadness we farewell Ed Asner, who died this week at the age of 91.

Ed was a former Screen Actors Guild President, SAG-AFTRA National Board member and SAG Life Achievement Award recipient. He was also a tireless fundraiser for the Ed Asner Family Center.

“There have been few actors of Ed Asner’s prominence who risked their status to fight for social causes the way Ed did,” said SAG-AFTRA President Gabrielle Carteris. “He fought passionately for his fellow actors, both before, during and after his SAG presidency. But his concern did not stop with performers. He fought for victims of poverty, violence, war, and legal and social injustice, both in the United States and around the globe.”

Asner created one of the most memorable roles in television history — the gruff but loveable newsman Lou Grant on two hit television series for CBS: the comedy Mary Tyler Moore from 1970–1977 and the drama Lou Grant from 1977–1982. His five Emmy Awards for that role, plus two additional Emmys, set a record for the most Emmys ever awarded to a male TV actor. In 1992, he received a star on Hollywood’s Walk of Fame and was inducted into the Academy of Television Arts and Sciences’ Hall of Fame in 1996. In 2001, Asner received the Screen Actors Guild Life Achievement Award.

Asner was born on Nov. 15, 1929 in Kansas City, Mo. (in 2011, he recalled, “They had the decent hospital, so that’s where I ended up [but] I grew up in Kansas City, Kan.”). His Orthodox Jewish parents, Lizzie and Morris Asner, had emigrated from Russia, and Morris ran a second-hand shop in Kansas. Edward Asner, known then as Eddie, attended Kansas City’s Wyandotte High School and the University of Chicago. He spent 1951–53 in military service with the U.S. Army Signal Corps in France. After he left the service, Asner joined the Playwrights Theater Company in Chicago. He moved to New York in 1955, where he appeared in numerous Broadway and Off-Broadway productions, including an acclaimed revival of The Threepenny Opera. In 1961, he moved to Hollywood, where he worked on the films El Dorado (starring John Wayne) and They Call Me Mister Tibbs (starring Sidney Poitier), and on the television series The Fugitive, The Mod Squad, Ironside and many others. He joined AFTRA in 1954 and SAG a year later, in 1955.

Despite a resume heavy with dramatic roles, in 1970 Asner was cast in the groundbreaking situation comedy Mary Tyler Moore. The show was a landmark for its portrayal of a single, professional woman, and Asner’s Lou Grant perfectly captured a grumpy, old-school male boss trying to cope with the new world of women’s lib and political correctness. His fierce but funny persona was summed up in the pilot episode, with his perfect comedic reading of the line in which Grant informs Mary, “You got spunk … I hate spunk!”

The show ran for seven seasons to high ratings and critical acclaim. When it went off the air, CBS took the unprecedented step of spinning off a drama from a comedy. Lou Grant premiered in 1977, and took the character from a Minneapolis TV station to a Los Angeles newspaper room. Despite the change in tone, Asner made the new format work. The show tackled social issues and earned Asner an additional Emmy for his portrayal, making him the first actor to win an Emmy for a comedy and a drama for the same role.
Asner was equally formidable off screen, where he was an outspoken advocate for those he felt were victims of oppression or injustice. Prior to being elected Screen Actors Guild president in 1981, he was a frequent presence on the picket lines during the joint Screen Actors Guild/AFTRA 1980 TV/Theatrical strike, which affected a multitude of productions, including his own Lou Grant, and was among the nearly two-dozen stars participating in the Evening of Stars strike benefit at the Hollywood Bowl. In September 1981, Asner addressed a crowd of 8,000 trade union members at Los Angeles’ MacArthur Park at a Solidarity Day event, and was elected Screen Actors Guild president six weeks later, winning 52 percent of the vote.

Asner was highly critical of the United States’ involvement in Central America, and of President Ronald Reagan in particular. In 1982, while he was Guild president, but acting as a private citizen, he and several other prominent activists held a press conference on the steps of the U.S. State Department to present a $25,000 check for medical aid to the Communist guerillas in El Salvador. When CBS canceled the highly popular Lou Grant later that year, Asner claimed it was in retaliation for his political views.

But less than a month after the Lou Grant cancellation, the Actors’ Equity Association honored Asner with its Paul Robeson Award, given in recognition of an individual or organization demonstrating “concern for and service to fellow humans, respect for the dignity of the individual, freedom of expression, universal brotherhood and the artist’s responsibility to the profession and greater society.”

In 1983, Screen Actors Guild members showed their approval of Asner by electing him to a second term as president, where he garnered 73 percent of the national vote. During his tenure, the union succeeded in getting California legislation passed to end auto insurers’ discrimination against actors, expanding unemployment insurance rights for actors, substantially increasing TV/Theatrical contract minimums and pension and health benefits, collecting a then-record amount of residuals for members, and successfully lobbying to amend and improve California’s Personal Managers Bill, which contained numerous provisions detrimental to actors.

Asner declined to seek a third term as Guild president, passing the gavel to his successor, Patty Duke, in 1985 and continued to keep busy as both a performer and a political activist. In addition to numerous guest-starring TV roles, Asner became a sought-after voiceover performer. He voiced Jabba the Hut for a radio version of Return of the Jedi, J. Jonah Jameson (another newspaper man) for the animated Spider-Man series, narrated several social activism documentaries and became an icon to a new generation of fans by voicing Carl Fredricksen in the 2009 smash-hit animated feature Up. Never mellowing, Asner made waves in late 2012 with his narration of a controversial short video, Tax the Rich: An Animated Fairy Tale, on behalf of the California Federation of Teachers. And in 2013, at age 83, he was touring his one-man stage show, FDR, portraying President Franklin Roosevelt.

He was a member of Campaign for Peace and Democracy, Democratic Socialists of America, Autism Speaks and a longtime advocate for universal government health care.

Asner, who would go on to serve as a National Board member of both SAG and SAG-AFTRA periodically from 1985 to the present, expressed his passion and conviction for his fellow union members in 1984, in an article for the Guild membership, declaring:

“Our union is our bill of rights. It sets standards for compensation and hours of work, to counter exploitation. It fights for human rights and creative rights, against the forces of bigotry and censorship. It establishes our right to health benefits when we are sick, and pensions when we are old. It provides a redress of grievances when we are abused and gives us a voice that cannot be outshouted by networks or studios. It asserts our right to share in the profits gleaned by our labor.

“The union is our way of showing we care about each other, that we believe in more than the survival of the fittest.”

Asner was married twice, to Nancy Sykes and Cindy Gilmore, and had four children: Matthew, Liza, Kate and Charles.


Explore celebrities by social reach, cause, location, field and more with

Copyright © 2021 Look To The Stars.
This article may not be reproduced without explicit written permission; if you are not reading this via email or in your news reader,
the site you are viewing is illegally infringing our copyright, and we would be grateful if you would
contact us.