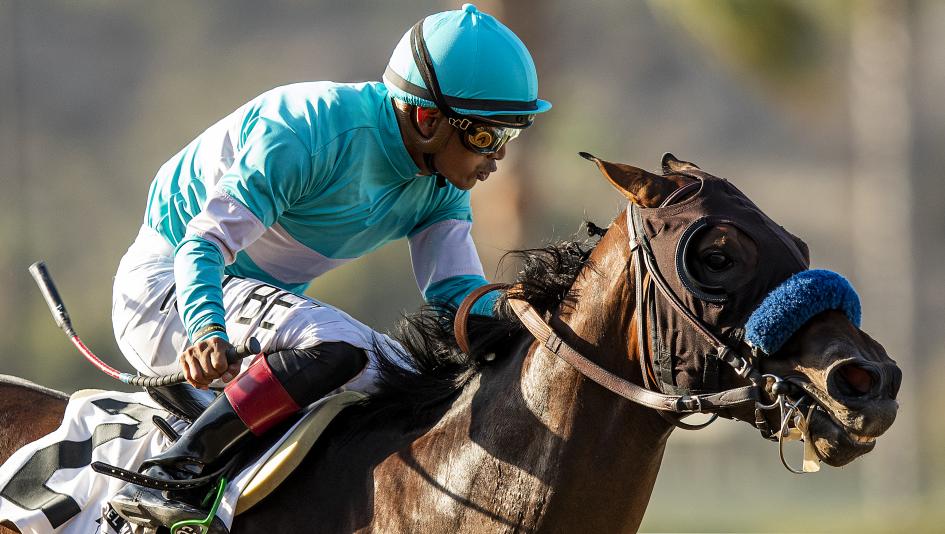 One of the highlights of racing at Del Mar each summer is the high-class program of juvenile, or 2-year-old, races conducted at the seaside oval.

Keeping this rich recent history in mind, it’s entirely possible we saw a future classic winner (or two) debut at Del Mar this summer. So, with an eye toward identifying contenders for the 2021 TVG Breeders’ Cup Juvenile Presented by Thoroughbred Aftercare Alliance and the 2022 Triple Crown races, here are five up-and-coming 2-year-olds to keep an eye on from the 2021 Del Mar summer meet:

There’s a reason why Corniche sold for $1.5 million at auction as a 2-year-old in training. Simply put, the bay colt is beautifully bred and very, very fast.

Corniche worked an eighth of a mile in 10 seconds flat before the Ocala Breeders’ Sales Co. Spring sale of 2-year-olds in training and showed similar speed in his Sept. 4 debut. Entering off a series of fast workouts, the Bob Baffert-trained juvenile dashed to a two-length lead through fast quarter-mile fractions of :21.72 and :45.13, then maintained a fast pace through the stretch to pull clear and win by 4 1/4 lengths under Hall of Fame jockey Mike Smith.

Corniche stopped the clock in 1:03.01 for 5 ½ furlongs while managing to sprint the final sixteenth of a mile in just 5.87 seconds, an impressive fraction coming off the heels of such a hot pace. Clearly Corniche has inherited serious talent from his sire, four-time Grade 1 winner Quality Road, and dam, six-time graded stakes winner Wasted Tears. The Road to the Kentucky Derby surely beckons.

It’s always nice to see a young horse display tenacity in addition to raw talent, and Forbidden Kingdom demonstrated both traits quite clearly when battling to victory in his debut on Aug. 21.

With jockey Juan Hernandez in the saddle for trainer Richard Mandella, Forbidden Kingdom was quick to get going, pushing to the front through fast quarter-mile fractions of :21.92 and :45.51. Forbidden Kingdom was pursued by the Bob Baffert trainees Kamui and Rhetoric, and in the run down the homestretch, any one of the three could have prevailed.

But in the end, Forbidden Kingdom refused to yield, turning back his challengers to win the 5 ½-furlong sprint by half a length in 1:04.38. A son of 2015 Triple Crown winner American Pharaoh out of the graded stakes-winning mare Just Louise, Forbidden Kingdom sold for $300,000 at auction as a yearling and surely is bound for a stakes race in the near future.

Fifth in a one-mile turf race then third in a dirt sprint dashing three-quarters of a mile, it’s safe to say Oviatt Class didn’t find much success in his first two starts at Del Mar.

But Oviatt Class took a big step forward in a one-mile dirt race on Aug. 27. The third time was clearly the charm, as Oviatt Class came charging hard from behind fast quarter-mile fractions of :22.04 and :45.91 to trounce his rivals by 4 1/4 lengths in 1:38.26.

Oviatt Class’s success running long on dirt isn’t surprising when you examine his pedigree. The bay colt is a son of 2006 Preakness Stakes winner Bernardini out of a mare by two-time Breeders’ Cup Classic winner Tiznow, which is a pedigree strongly geared toward success at classic distances on dirt. Perhaps Oviatt Class can develop into a Triple Crown contender for trainer Keith Desormeaux, who won the 2016 Preakness with Exaggerator.

When the dust settled on the final day of racing at Del Mar, the most accomplished 2-year-old male of the meet was clearly Pinehurst. Trained by Bob Baffert, the colt by Twirling Candy battled to victory in his Aug. 1 debut sprinting five-eighths of a mile, then came right back to dominate the Grade 1 Runhappy Del Mar Futurity by daylight.

Pinehurst couldn’t have been much sharper in the Del Mar Futurity. After racing to the lead through quick quarter-mile fractions of :22.09 and :44.77, Pinehurst kicked away with authority in the stretch, winning by 4 1/2 lengths while crossing the finish line in 1:23.55 for seven-eighths of a mile.

Purchased for $385,000 as a yearling at the Keeneland September sale, Pinehurst is a son of Twirling Candy (best known as the sire of 2021 Preakness winner Rombauer) out of a mare by three-time leading sire Giant’s Causeway. This is a versatile pedigree combining speed with stamina and multi-surface versatility, so Pinehurst should have no shortage of racing options for the remainder of his career.

Speaking of pedigrees combining speed with stamina, Rockefeller’s lineage is a perfect example of this approach. His sire, Medaglia d’Oro, finished second in the 1 ½-mile Belmont Stakes and is known as a source of stamina at stud. In contrast, Rockefeller’s dam is Dance to Bristol, a daughter of champion sprinter Speightstown and herself a Grade 1 winner sprinting seven-eighths of a mile.

Rockefeller put both his speed and stamina to good use in a maiden race dashing three-quarters of a mile on Aug. 28. The Bob Baffert trainee broke sharply in his debut, set a strong pace of :22.02 and :45.19 through a half-mile, kicked away to a five-length lead in the stretch, and finally dug deep to stem off a late runner and win by 2 1/4 lengths in 1:11.18.

Purchased for $750,000 at auction as a yearling, Rockefeller has the pedigree to improve with maturity, so it’s unlikely we’ve seen his best yet. He’s well worth following as a 2022 Triple Crown contender.