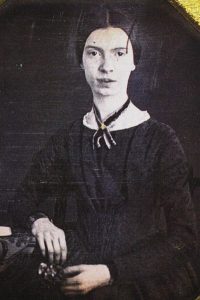 Today in our poetry news update, we take a look at the reopening of the Emily Dickinson Museum and the news that the Palm Beach Poetry Festival will not take place in 2023.

When it comes to bringing literary figures who are long dead “back to life” for modern audiences, it can often be a challenge. The Emily Dickinson Museum, which is based in the Amherst home of the 19th-century poet, has recently reopened following a series of renovation work and found itself struggling to find ways to attract new visitors.

Thanks to a donation of props from the streaming series “Dickinson” that appeared on Apple TV recently, these have been added in the hope of making the rooms of the museum a little more relevant. Whilst the show itself was rather a mix-up of different aspects of the culture of the 1800s and more modern day, with costumes that were perfect for the era and modern day curses to make the programme appeal more to a younger audience, it has made Dickinson seem more relatable. In fact, whether die-hard fans of the poet like it or not, this is how quite a few people now picture Dickinson.

During much of her adulthood, Dickinson was an eccentric, reclusive person and the colours on the wall of the museum, pale and muted colours, help to reflect that. These have now been replaced as part of a drastic makeover that took two years. Gone are the muted shades, and in their place, a more vibrant coloured yet still historically accurate wallpaper.

The bright colours and almost 300 different pieces from the set of the tv drama have completely transformed the inside of the museum, and the directors are hoping that they will attract more visitors by giving an experience that will help them connect better with the life of the poet.

The idea came about when the show finished last year, and the large collection of props was surplus to requirements. The producers came up with the idea of donating them to the museum, and the plans were made. In this way, things have come rather full circle. When the scriptwriter of the drama was struggling to write some of the lines, she spent time at the museum to commune with Dickinson and get a sense of who she really was. Following the death in May of Miles Coon, the founder of the Palm Beach Poetry Festival, and also the loss of the festival’s long-time home at the Delray Beach Old School Square location, the festival officials have decided that the festival will not go ahead in 2023.

They will be taking time out to search for another suitable venue, and the festival will be relaunched with a new name to reflect this. They hope that they will be able to have their plans in place ready for a 2024 festival instead.

The festival was founded in 2004 by the retired attorney and businessman who became a poetry fan later on in life. During its successful years, the festival saw the likes of Natasha Trethewey, Billy Collins and Robert Pinsky attending to give readings.