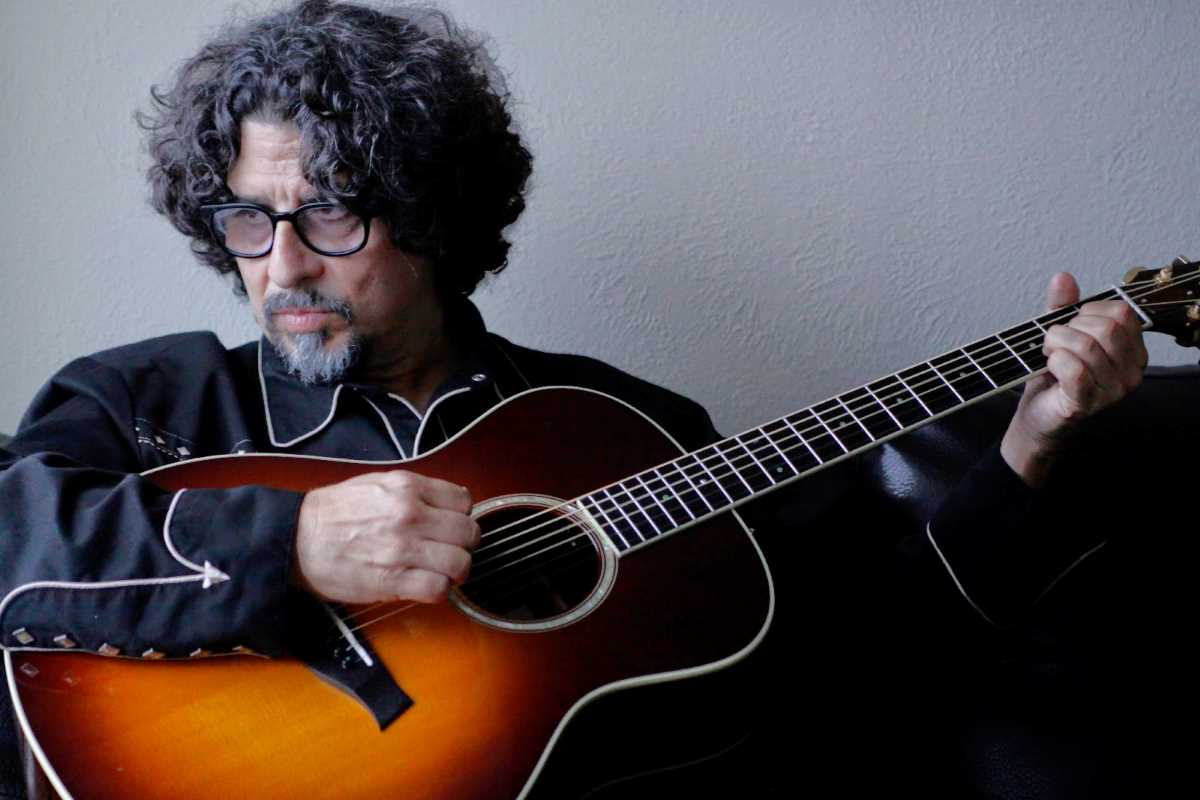 Tell us about your tour vehicle. Any notable breakdown stories?

How do you eat cheaply and/or healthy while on tour?

When I am able to sit for a meal, Applebee’s has low calorie options that can be modified (hold the potatoes, double the vegetables). So that’s my quick-and-dirty go-to. When I cannot stop, the only viable option is chicken sandwiches from any number of fast food places. Most of the standard options require heavy thought to avoid caloric disasters. And I avoid potato chips from truck stops. Too tempting, too fattening. Once in venue cities, it’s pretty easy to find good stuff. But not on the highway. It’s a vast lard-laden wasteland out there. I often get a rotisserie chicken from Costco for $4.99 and some frozen vegetables use them as a meal starter for cooking in the van.

How many strings do you break in a typical year? How much does it cost to replace them?

Since I started asking for louder monitors and playing more lightly, I almost never break strings, maybe one every few years. That said, I broke one yesterday, the high G string on a 12-string, a guitar I’ve had out for 16 months. First break in maybe four years. Strings have become costly, unless you are lucky enough to get an endorsement deal or artist pricing, like just under $9 a set. Lately, I use Martin Retro strings, Monel alloy strings that resist corrosion and last a long time. Elixirs which I used to use, are plastic coated and don’t soak up skin oils. And I avoid changing 12-strings at all, cuz they are already bright by nature, and take forever to change.

Where do you rehearse?

It will sound weird, but I don’t rehearse, kind of ever. It’s been over 20 years. My late partner Eric Lowen typically did 30-minute living room rehearsals almost daily, living only a block apart. But once we did a show in Denver in 2000, and forgot to rehearse before going out. That night, every song sounded slightly different and disarmingly fresh. So we stopped then and there. To this day, when I work with players, I post MP3s and charts on a web page and say, “Learn the songs, or don’t. If you don’t, then bring your “A” game.” I work with highly skilled, intuitive players who listen for the holes, and I have yet to be let down. The real peculiarities are the new elements that ethos brings on stage, where an old song suddenly sounds new again.

What was the title and a sample lyric from the first song that you wrote?

The song was called “Where We Can Begin”, a plodding E minor thing reminiscent of Neil Young’s “Down By the River”. The most cringeworthy lines were “Your open drape lets the sunlight in / It slaps my face and says we’ve sinned”. It didn’t actually have a chorus. “Where We Can Begin” was the last line of the entire song. I’m unlikely to ever play it in public and pray the demo never gets out there.

My first gig was a 15-minute slot at a Troubadour Monday Hoot Night in 1974, the heyday of that venue’s open mic. I had just finished UCLA, and dozens of my classmates came out to support me and our friend Jeff Stillman, who was backing me on electric guitar. It was a triumph. A month later I did it again, none of them showed up and it was back to reality, the true beginning of the long hard climb.

Except for a short sting at Taxi, the music placement service in LA, in 2003, when an impending divorce was strapping me financially, my last real job was in the early 80s in advertising, as a copywriter, art director and account executive for a small agency. “We Belong” hit in my fifth year there, and I dove headfirst into music full-time. I had to give 6 months’ notice, as I was pretty high up in the company. Never feared or regretted it for a second.

Technically, I have a day job now, singing and voice acting in film, TV and commercials – Disney’s Encanto, Coco, Happy Feet, American Dad and Family Guy, and many others. It’s all SAG-AFTRA union work, provides me health insurance and credit toward a tidy pension, residuals on replays, and has supplemented my income for 34 years. It’s a “day job” because when I work, I do what THEY want. In my singer-songwriter role, I do what I want.

How has your music-related income changed over the past 5-10 years? What do you expect it to look like 5-10 years from now?

Over the years, “We Belong” has become classic, something that was not self-evident when the song was first a hit or even a dozen years after that. My songwriting income dipped to very small five figures in 1994, bolstered by live performance and my session work in films and commercials. Then it started turning around. The past five years have been my best ever, with “We Belong” getting plum film and TV placements several times a year. Recapturing my copyright three years ago made it even better. I firmly believe that it will continue, as the value of old classic songs continues to skyrocket. The growing trend of large ticket catalog acquisitions by publishers underscores that. So I’m a very lucky guy right about now.

What one thing do you know now that you had wished you knew when you started your career in music?

I wish I had bought the old guitars I thought were too expensive at $2000 all those years ago, that are worth five and ten times that today. I would have bought myself a few vintage Martin and Gibson acoustics, or sold the 1959 O-18 I sold in 2003.

I wish I had known that traditional album sales would all but disappear, in favor of streaming, which is lucrative for labels but not artists. I might start a streaming platform.

Dan Navarro has had an eclectic 40+ year career as a songwriter, recording and touring artist, session singer and voice actor spread over 17 acclaimed albums, thousands of concerts, singing and voice acting in films like Oscar-winners Coco and Happy Feet, TV series American Dad and Prison Brea, video games Fallout 4 and Red Dead Redemption II, hundreds of commercials in Spanish and English, and writing songs for Pat Benatar (the Grammy-nominated classic “We Belong”), The Bangles, Dave Edmunds and more. In early 2019, after 20+ years with Lowen & Navarro, he released his first studio-recorded solo album, Shed My Skin, to rave reviews.

As an activist, Dan is SAG-AFTRA’s National Vice President – Recording Artists/Singers, a Trustee of the AFM & SAG-AFTRA Intellectual Property Rights Distribution Fund, and a member of the Mechanical Licensing Collective’s Unclaimed Royalties Oversight Committee. He previously served The Recording Academy’s Los Angeles Board of Governors 1999-2007, Folk Alliance International’s Board of Directors 2006-2017 (including four years as Board president 2007-2011) and five years on the board of Levitt Pavilion Los Angeles – Pasadena 20013-2018. He testified before the Senate Judiciary Committee on behalf of AFTRA and the AFM in 2002, and before the Copyright Royalty Board in 2007 on behalf of SoundExchange.

Horizon Line, his latest album, was released in August 2022. Connect with Navarro online and on the road.