College Gymnasts Are Embracing Dance—And Going Viral for It

When UCLA gymnast Nia Dennis went viral earlier this year, it wasn't just due to the power and height of her tumbling passes. Instead, what captured millions of viewers (and drew kudos from Missy Elliott and Michelle Obama) was her polish and charisma as a performer, transitioning seamlessly from a double tuck into high-energy hip-hop choreography—and turning the gymnastics floor into a stage in the process.

Recently, it seems, an NCAA routine goes viral every year not necessarily for its technical content, but for the sheer quality of the dancing. Before Dennis, Katelyn Ohashi, Hallie Mossett and Lloimincia Hall all had their moment in the national spotlight. These gymnasts are embracing dance—and finding audiences embrace them back.

There are reasons college athletes are more likely to go viral for their dance moves than Olympic stars like Simone Biles. First, the scoring system is very different: While elite gymnastics—the international level—operates under an open-ended code that rewards difficulty, scores are capped at a perfect 10 in NCAA women's competition, with less strenuous composition requirements. "In elite gymnastics, your routines are packed with so many skills that you don't really have as much time for dance and artistry," says Mossett, who was a USA Women's National Team member before her star turn at UCLA, and is now an assistant coach and choreographer at Long Island University.

Since the skills are less difficult, college gymnasts can also dance in and out of them more easily: In her 2019 viral routine, Ohashi ended her final pass with a jump and drop into the splits. "Coming to college, choreography is more fun," says Lexy Ramler, an elegant star on the University of Minnesota's team. Her tumbling passes went from four to three when she transitioned from intense club training to college—in the same 90-second time limit. "I had extra time to perform. You can breathe a little bit easier."

Some head coaches have taken advantage of college rules to experiment with out-of-the-box choreography, in a sport that still often equates dance with classical lines. Black culture has become especially prominent in recent seasons, from Mossett's Beyoncé-inspired 2017 routine—which borrowed some of the star's moves—to Dennis' stepping, dab and nae nae. Dennis' teammate Margzetta Frazier even paid an inspired tribute to voguing.

UCLA is credited with starting the trend: Its longtime head coach, Valorie Kondos Field (known as "Miss Val"), was a professional dancer with Sacramento Ballet and The Washington Ballet before leading the California team from 1991 to 2019. Under her, putting on a show was a must. 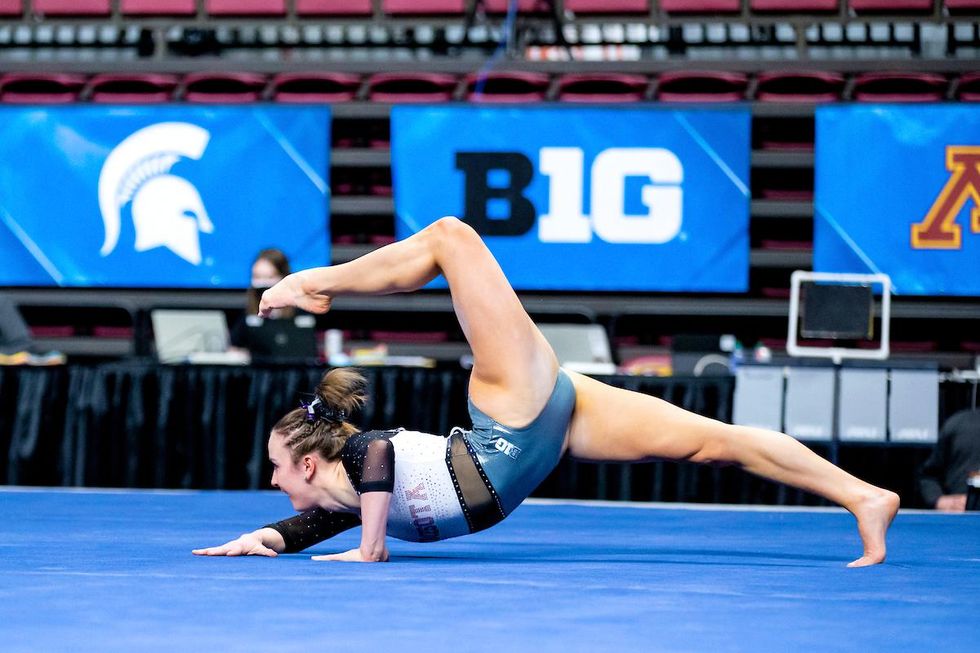 Lexy Ramler in a floor routine

"Val definitely taught me how to perform on every event, not just floor," Mossett says. Beam routines are often choreographed with a sense of flow in mind, just as they are on floor. On bars and vault, flair, beautiful shapes and the odd flourish may also separate the good from the great.

And in recent years, other gymnastics teams have worked hard to step out of the shadows of higher-profile college sports and build their brand. Dance, they've realized, is part of the core appeal of gymnastics for audiences. "The product is of higher value in college gymnastics, and by that I mean entertainment value, getting the crowd into your actual performance," says Jessica O'Beirne, the creator and co-host of the popular GymCastic podcast. "There is that element of soul, where as an elite, winning tends to be the most important thing."

One such team is University of Oklahoma, which won its first national championship in 2014 and has since repeated the feat on three more occasions. K.J. Kindler, Oklahoma's head coach since 2006, started choreographing her own routines as a teenager, and acknowledges that her focus on artistry was part of a strategy to make the team stand out. "We definitely have an identity here at Oklahoma," she says. "I want my gymnasts to be all in and express it. I tell them: 'We are a spectator sport.' "

Kindler's routines share a distinctive style, with expressive hands, hyper-articulated sequences and a sense of musical clarity, and they've proven a draw. Anastasia Webb, who just graduated after a storied career that included winning the 2021 national title in the all-around and tying for the title on vault and floor exercise, says it was one of the reasons she committed to Oklahoma.

"Honestly, I would say I'm more exhausted from the dance than the passes," she says of performing Kindler's choreography. Webb's fast-moving floor and beam routines offered an arresting blend of fierceness and fluidity. "I'm very shy in real life. I feel like I'm a different person on the dance floor."

For gymnasts trained to maintain tight form and avoid mistakes at all costs, however, the release choreography requires can be difficult to achieve. Some routines come with stories, to help athletes get into character. "I felt like I was in this, like, sassy, tense jungle, and I was fighting for every skill, every point, every movement," Webb says of her senior season's floor routine. And coaches have their tricks to get gymnasts to project. "Sometimes I'll put pictures of people around the gym in focal points, where they're supposed to be looking," Kindler says.

Despite the strides made, coaches and choreographers agree that outstanding artistry isn't properly rewarded, even in the NCAA. While a viral routine or some teams' star performers may find it easier to get a perfect 10, as opposed to the many 9.95s awarded throughout a season, artistry-related deductions are rarely taken. "I feel that artistry is not taken into enough consideration in the judging," says Kindler, who was asked by one judge how she defines good choreography. "What the judges have a hard time with is style," she adds, as most gymnastics professionals aren't trained to recognize, say, a good hip-hop–inspired performance.

And when choreography doesn't translate into scores, some competitors may also prioritize other aspects. "The dance world is all about the artistry, whereas in gymnastics, the artistry is a nice plus," says Jeremy James Miranda, a former gymnast and musical theater performer who is the University of Florida's choreographer. "Oftentimes I'll go into a choreography session with all these ideas and then someone comes in and says: 'She's going to be too tired, you've got to water this down.' " That's in part why you'll see less dance at the Olympics.

The NCAA's rules also limit choreographer recruitment. Teams can have no more than three paid coaches per season, which means that dancemakers often have to contribute in a volunteer capacity. (Although some make money working for lower-level clubs or summer camps.) "The kind of poverty that choreographers have to live in in order to choreograph routines is totally unacceptable," O'Beirne says.

As a result, while a handful of choreographers, like Miss Val and UCLA's BJ Das, who created Dennis' viral routine, have come to gymnastics from the dance world, most are former gymnasts with varying levels of dance training.

Some gymnasts maintain connections to the dance world after graduation, but it's not necessarily an easy transition. A number have gone on to perform with Cirque du Soleil, and Dennis has expressed an interest in becoming a backup dancer now that her college career is over. Geralen Stack-Eaton, an assistant coach and choreographer at the University of Minnesota, moved to New York City in 2012 to audition for Broadway shows after becoming a national champion with Alabama's program, yet ultimately decided to return to gymnastics.

She wishes there were more collaborations between the two fields. "It would be nice if dance and gymnastics overlapped a little bit more," she says, "because we could definitely learn from the dance world."