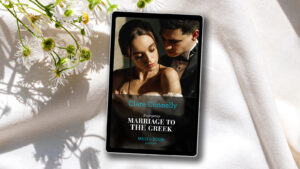 Emergency Marriage to the Greek by Clare Connelly is a contemporary romance with all the tropes we LOVE! Included forced proximity, brother’s best friend (with a difference) and marriage of convenience.

When it comes to reading romance, I have a few favourite tropes (actually, more than a few; I’m a trope junkie, through and through). I love marriage of convenience stories, I love forced proximity stories, and I love second chance romances. Emergency Marriage to the Greek was super fun to write because I got to explore these three tropes with two characters whose chemistry was apparent from the first chapter.

There are so many ways I come up with ideas. Sometimes, it’s a situation that occurs to me, a chance meeting, a reunion; other times, it’s the crux of the conflict—a perfectly formed notion of why my heroine and hero are at loggerheads from the start—and then, it can also be about a character. For Emergency Marriage to the Greek, this was very much the latter. The idea for Tessa started to form after talking to a friend who’d recently left a particularly unpleasant partner. My mind got carried away, imagining the kind of happily ever after someone like my friend deserves, and Tessa started to take shape. Of course, then it was a matter of understanding why she’d married someone like her ex-husband, what had she been running from in the first place…

I’ve also been interested for a long time in writing stories that explore what happens behind the scenes. For a character like Tessa, to the outside world, she has it all – an enormous personal fortune, part of a family dynasty, she’s young, attractive, successful in her own right – but on a personal level, she’s just as vulnerable to heartache and hurt as anyone else.

Two years before the story begins, Tessa’s brother (and Alex’s best friend) unexpectedly dies. In a state of mutual grief, she and Alex share one unforgettable, forbidden night together, but it’s too much of a betrayal for Alex, who pulls back from Tessa. Hurt and rejected, she rebounds into a disastrous marriage, which ends badly.

With her personal life in tatters, gossip bloggers having a field day thanks to her indiscreet, celebrity hungry ex, and the board members of her family’s company, of which she was CEO, asking for her removal until after the ‘scandal’ dies down, Tessa needs to find a way to right the ship and take control of her life once more – and a cold marriage to Alex would be a good place to start!

It’s hugely important for Tessa to retake her power, and start controlling the direction of her life. I absolutely love that the idea of the marriage is all hers, that she’s clear with Alex from the start what she stands to gain from it. She’s an empowered, confident heroine despite her vulnerabilities, and it was really fun having her approach Alex with her proposal, oh so certain she can control their chemistry and ensure a simple, businesslike relationship, despite their fiery past (almost as much fun as watching Alex tear down her defences, piece by piece…).

I really love the idea of a ‘phase two’ in my characters’ lives – a fresh start, a chance to fix whatever mistakes they might have made, or to simply find joy after a miserable period. Tessa made a mistake when she married – she was running from something, and she just happened to run in the wrong direction – but the idea that having gone down the wrong path, realised, and then changed tack, she might end up with a happiness beyond her wild imaginings? That’s a really fun concept to explore, especially when you love your characters as dearly as I do Tessa and Alex.

Mostly, what I enjoy about both reading and writing romance is the opportunity it provides for escape from ordinary, day to day life. I first started writing, in earnest, when I had two children under two and was at home with them all day, every day. Their nap time gave me a chance to lose myself in a romance – either by writing or reading – and that regular window into another world really refreshed me. In this spirit, Alex and Tessa’s romance takes place in sun-soaked Athens, with a decadent yacht and all the trimmings of a luxurious, super-glam life. So. Much. Fun!

I hope you enjoy reading Emergency Marriage to the Greek and feel that Tessa’s second chance is everything she deserves in life, and more.

Read now in eBook or in paperback which also features Innocent Until His Forbidden Touch by Carol Marinelli.