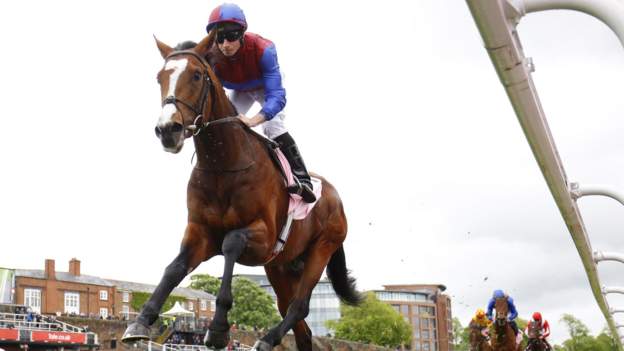 Changingoftheguard won the Chester Vase as jockey Ryan Moore sealed a day one treble at the May meeting.

Moore sent his mount immediately to the front and the Godolphin favourite New London in second could not catch him.

The jockey also won the Cheshire Oaks on Above The Curve for O'Brien, plus the handicap with Live In The Dream.

Victory for Changingoftheguard means O'Brien has won 10 of the last 15 runnings of the Chester Vase.

The trainer also has current 5-2 Derby favourite Luxembourg as he seeks to extend his record of eight victories in the Epsom Classic on 4 June.

"We were delighted with the run and I think off the back of that, you'd have to say he'd go to Epsom now," said O'Brien.

Thoughts Of June held off Above The Curve to win the Cheshire Oaks as full-capacity crowds returned at the meeting for the first time in three years after Covid-19 restrictions.

The 7-1 winner, beaten twice previously by his rival, was given a bold ride from the front by Moore for O'Brien, whose son Joseph trains the runner-up.

Moore took the five-furlong handicap on Live In The Dream, trained by Adam West.

Ever Given, ridden by Danny Tudhope, won the six-furlong handicap for trainer Hugo Palmer, who recently moved to Cheshire from Newmarket to train for former England footballer Michael Owen.