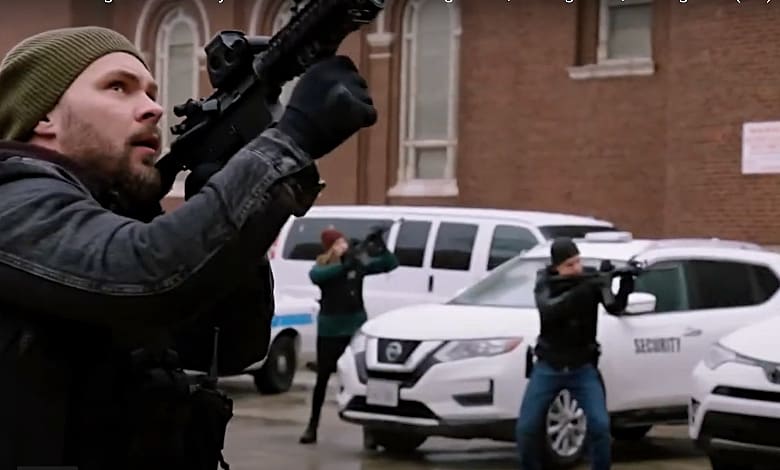 Celebrities are reaping what they’ve sown.

Hollywood responded to the 2020 death of George Floyd by embracing the Defund the Police movement. Some of the industry’s biggest stars, including Lizzo, John Legend, Jane Fonda and Natalie Portman, demanded less police officers nationwide.

‘We’re going to make something that will be truly groundbreaking this year. We have an opportunity and we plan to use it’ pic.twitter.com/4w4N4wycFL

These same stars went silent as crime raged nationwide, but the damage was done.

Hollywood simultaneously served, then and now, as a Democratic SuperPAC. They’ve thrown millions behind progressive politicians and dragged Joe Biden over the presidential finish line late in 2020.

Production on NBC’s “Chicago Fire” stopped Wednesday when shots rang out on Chicago’s West Side. The show’s full cast were “yards” away from the gunfire.

RELATED: TOO MANY CELEBRITIES CONDONE VIOLENCE

On a single July day bullets hit a fence surrounding the set of NBC’s “Chicago Med” while production on “Justified: City Primeval” halted when a gunfight spilled onto the upcoming show’s set. The latter beefed up its security protocols following the incident.

And it’s not just a Chicago problem.

Violence also crashed a comedy gig featuring “The Office” alum Craig Robinson in North Carolina. Robinson was waiting to appear at The Comedy Zone in Charlotte when a gunman discharged his weapon.

The Baltimore police department confirmed that a group of locals contacted producers working a shoot on Park Avenue in the downtown area at around 4 p.m. on Friday. The group threatened to return in the evening to shoot somebody if production didn’t cease. Producers were also told to pay a sum of $50,000 to the group before production would be allowed to continue.

Even closer to Hollywood’s home, police are advising citizens to beware of pickpockets. West Hollywood officials noted an alarming uptick in pickpocket crimes, more than double the average rate in the California city.

Actor Frank Grillo (“Captain America: The Winter Soldier”) railed against L.A. crime rates after his boxing instructor, Azuma Bennett, was killed by a hail of gunfire outside a marijuana dispensary.

“I don’t know what’s happened to Los Angeles that a beautiful guy like this gets shot and killed over nothing.”

Everyday citizens are trying to fight back.

Will it be enough?

More importantly, will celebrities realize that failed Democratic policies are putting their lives, as well as their fellow Americans, at risk?

UPDATE: Rapper/actor Ice T is coming clean about the dangers in his L.A. neighborhood.

People are still hitting me up about my comments about LA Gang culture.If you NOTICE, LA rappers don’t wear a lotta Jewelry… Me, Snoop, Cube, Dre, Game, Kendrick..The list goes on.. It’s not cause we’re broke. LA is just a Dangerous place,rapper or not. Why test the streets..