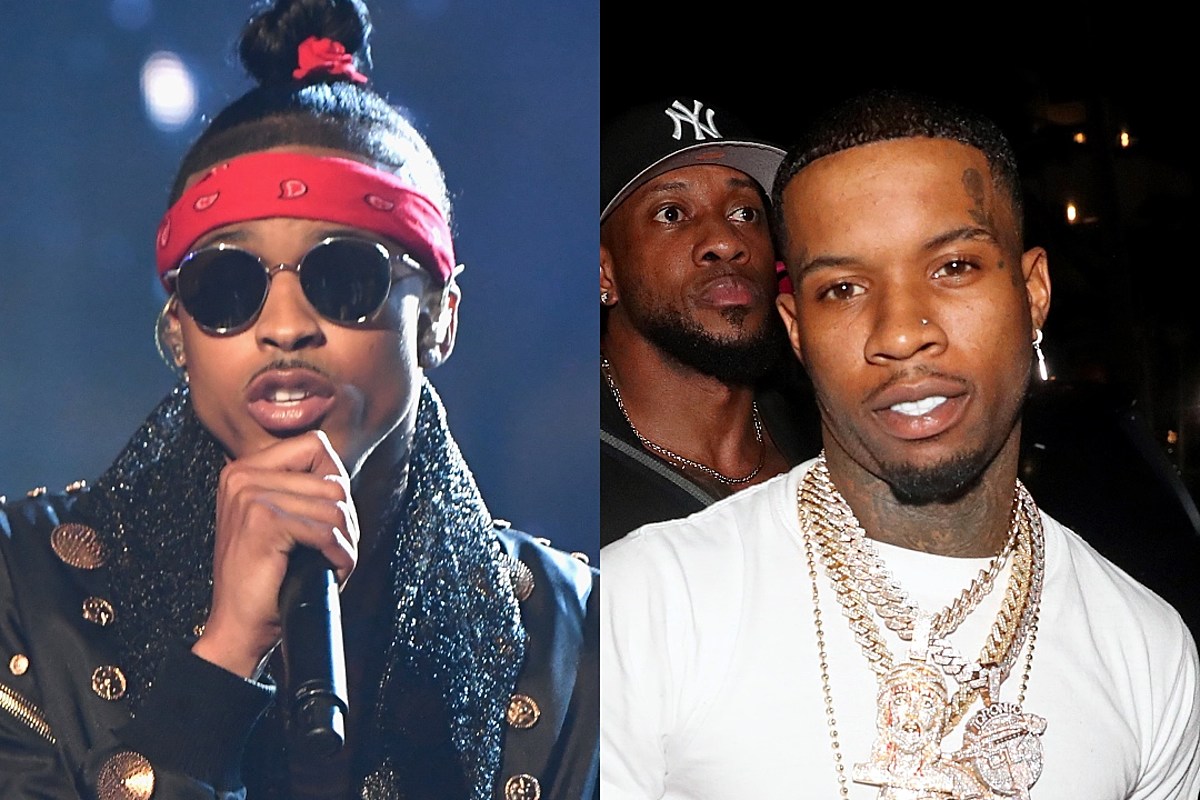 August Alsina is showing off the wounds he suffered from his alleged fight with Tory Lanez.

The internet has been buzzing over reports of a physical clash between the two rap-crooners. On Sunday night (Sept. 18), August Alsina shared a series of pictures of the injuries he said he received after Tory Lanez allegedly sucker punched him in Chicago. The first image shows a hole in August's bottom lip. The second picture in the series shows a gash on his forearm. In the third photo multiple scabs can be seen on August's knee. The final pic shows blood coming from his mouth.

August Alsina captioned the series of photos, "Me after a toupee’d sneak attack then being man handled by buku security one deep, as the jealous leprechaun run’s back off into the building.😂 @encinawellness is the key to healing this. I b back with my results once I heal up."

Tory Lanez has finally broken his silence on the incident as well. Speaking with DJ Akademiks, he denied being involved in a fight with August.

Reports first surfaced that August Alsina and Tory Lanez may have gotten into a scrum last night when Instagram blog GossipoftheCityTea reported that August had been knocked out by Tory after August refused to shake his hand when they ran into each other and tensions flared. The motive for the alleged animosity between the two entertainers reportedly centered around August being upset over Tory saying he wouldn't have snitched like August in a song lyric in 2020, in reference to August revealing his extramarital affair with Jada Pinkett Smith. August, however, had a different account of the incident.

"As I’m exiting the building after the show last night, A 4’11 sized leprechaun ran down on me w/ 8 oversized security nigxas, whom I greeted each individually upon their walk up as they tried to press me," he captioned a photo of himself in a elevator with what appears to be a bloody mouth. "Whole time, I’m one deep. No security. Tory continues to ask w/ a broken ego why I didn’t dap him up, I go on to tell him.. I was a fan of him and didn’t understand him speaking on my business publicly In the past, because I don’t know him or ever met him until last night. So when he spoke it caught me off guard because of his past actions, i assumed he didn’t like me, that’s all. Not to mention, with my history of health & condition just recently overcoming being paralyzed, my doctor directed me not to compromise my health while out on road and shake as less hands as possible due to corona, & monkeypox."

He continued, "Never any disrespectful words were exchanged, so i was a bit confused at how somehow he turnt him self up w/ anger after hitting a blunt laced with cocaine obviously, (i heard the fizzle) and he snuck me when I turned my head to move to the side amongst all his antsy moving and to keep an eye on the endless niggas that was w/ him surrounding me. Which was security and some nigxa with a gun tucked… whom he then proceeded to run behind and hide to run back in the building. There was never a 'fight'! Simply an Assault. Dude has no real friends, and is on a crash out mission. With that said, I was gone keep it G & not come to the net, but you moving with foul intent feeding falsities to blogs to look for a 'moment' cus them moments ain’t happening on stage for u. I will assist you in that, gracefully."

August Alsina also accused Tory of leaking information about the fight to the media.

"Y’all wouldn’t ever know about this if he didn’t try to go leak a story," August tweeted. "Me & his ppl were the only ppl out there when this happened. But for the sake of story telling.. we gone always stand on TRUTH."

Previous to his verbal denial, Tory Lanez appeared to address the situation on Instagram.

"I don't know what everybody talking about," he wrote on his IG Story. "But I've been in the studio .... I'm not into anything negative ... I've been working on my self ... And being a better person."

XXL has reached out to Tory Lanez's team for comment.

See 10 of the Shortest Beefs in Hip-Hop

Beefs within rap that ended quickly.

PrevPrevious90 Day Fiancé’s Angela Deem Explained All The Flirting With Canadian Billy, But It’s Not The Most Consistent Excuse
NextBook Riot’s Deals of the Day for September 17, 2022Next