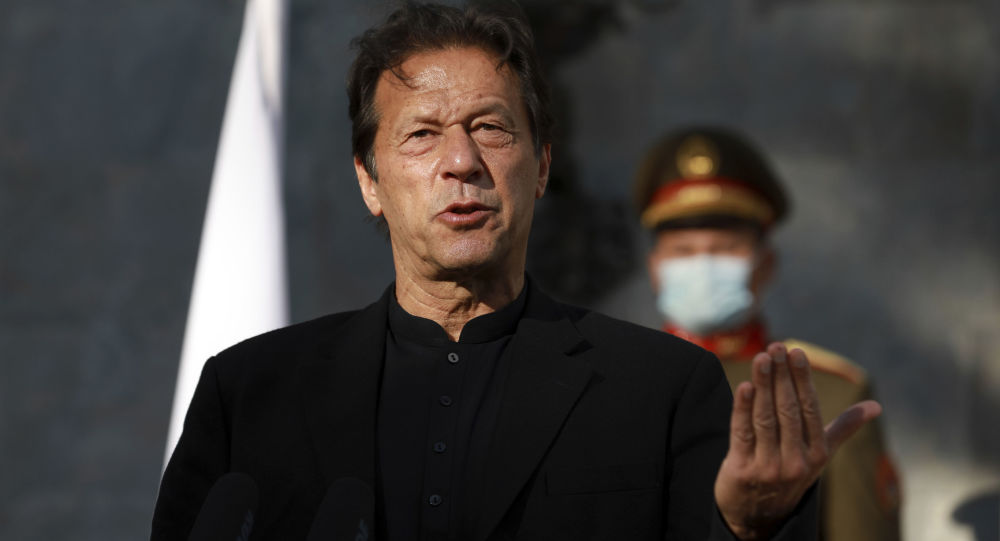 Islamabad says it will not resume its peace process with New Delhi until Prime Minister Narendra Modi's government walks back its decision to abrogate the semi-autonomous status of Jammu and Kashmir. The Indian Parliament's 2019 decision was also rejected by China, as Beijing has its own designs on the region.

Pakistani Prime Minister Imran Khan on Monday accused India of being “against the idea of peaceful co-existence” since the founding of the Islamic democracy in 1947, and blamed his southern neighbor of “imposing” one war after another on Islamabad.

“Whether it was during the War on Terror spanning two decades or the wars in 1948, 1965 or 1971, subversive activities inside Pakistan or propaganda through cyber warfare, the enemy has been carrying out operations against us,” Khan said in a statement in Urdu, posted on his Facebook page.

The statement was made to commemorate the 1965 India-Pakistan War, a conflict in which Islamabad believes it got the better of India.

“...we are not only fully capable of defending the homeland, but are always ready to deal with any kind of aggression,” stated Khan, hailing his nation’s forces for repelling “Indian aggressors” during the 1965 war, as well as the other wars including a 1948 war and the 1971 Bangladesh War of Liberation.

The 1948 India-Pakistan War occurred after Islamabad-backed Islamist militias and army regulars invaded the predominantly Muslim state of Jammu and Kashmir, in the wake of its then-Hindu king acceding to India after the subcontinent's independence from Great Britain in 1947. By the time Delhi mounted a counter-offensive, Pakistan-backed forces had overrun large parts of Kashmir. Since then, parts of Jammu and Kashmir are separately administered by both New Delhi and Islamabad.

An Indian paramilitary soldier stands guard at a check point during restrictions in Srinagar, Indian controlled Kashmir, Friday, Aug 30, 2019. India on Thursday said it has information that Pakistan is trying to infiltrate terrorists into the country to carry out attacks amid rising tensions over New Delhi's decision to abrogate the autonomy of Indian-administered Kashmir

The 1971 Bangladesh War of Liberation saw Delhi stepping in to militarily help erstwhile East Pakistan (present-day Bangladesh), after a bloody crackdown by Islamabad on Bengali-speaking Muslims in the region led to a mass exodus of refugees into India's eastern states. Ultimately, the Indian military intervention led to a bifurcation of Pakistan and the creation of a separate nation, Bangladesh, which was under Pakistan's control from 1947 until 1971.

Khan further credited Islamabad’s “successful foreign policy” for “exposing India’s real face” in Jammu and Kashmir, as he predicted that Delhi would have to roll back its 2019 decision to rescind the semi-autonomous status of the region.

“The international community acknowledges that the only way to peace in the region is to resolve the Kashmir issue in accordance with UN Security Council resolutions,” Khan said, calling on the UN to hold India “accountable” for the latter's policies in the region.

India has repeatedly rejected what it characterizes as Pakistan’s interference in Jammu and Kashmir, dismissing the instability as an “internal matter”.

The Pakistan prime minister used the occasion to again target India for attempting to create “instability” in the country through Afghanistan during the administration of fugitive president Ashraf Ghani.

Before last month's takeover of Afghanistan by the Taliban*, Islamabad claimed it had "irrefutable evidence" that India was operating over 65 terrorist training camps inside Afghanistan for Pakistan-focused violent jihadi groups such as the Tehreek-e-Taliban (TTP) and the Balochistan Liberation Army (BLA).

In November 2020, Pakistan's Foreign Minister Shah Mahmood Qureshi claimed that Indian agencies were targeting infrastructure projects under the control of the China-Pakistan Economic Corridor (CPEC), the flagship initiative of the Beijing-funded 'One Belt One Road' trade route.

Both India and Pakistan claim that they emerged victorious in a war that, according to neutral reports, some 7,500 people were killed.

Per historical accounts reported by Indian news website The Quint, Pakistani forces tried to push nearly 30,000 soldiers and other militants into the erstwhile Indian state of Jammu and Kashmir (India withdrew its statehood in 2019) as part of 'Operation Gibraltar', an act Pakistani generals at the time admitted was meant to trigger a popular anti-India uprising in the Kashmir region. The assault failed to produce the desired results, according to General Muhammad Musa Khan, the head of the Pakistani Army at the time.

In another invasion against India days after Operation Gibraltar, Pakistani forces attacked the city of Akhnoor in Jammu and Kashmir. In retaliation for Pakistan’s second attack, India’s then Prime Minister Lal Bahadur Shastri ordered Indian troops to cross into Pakistan, with Indian forces reaching the doorstep of Lahore, according to a BBC report dated 6 September 1965.

The war was resolved with the signing of the Tashkent Declaration on 10 January 1966. The Moscow-brokered treaty, signed in Uzbekistan’s capital city, saw both governments agree to give up on each other’s territories occupied during the war.

*The Taliban is a terrorist organization banned in Russia and many other states.