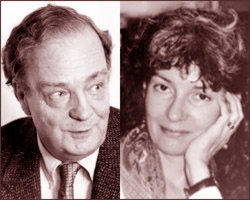 Donald Hall was born on this day in 1928. As guest editor of The Best American Poetry 1989 -- the second volume in the series -- he taught me much about the making of an anthology. As a man of letters, who felt as comfortable writing a profile of Henry Moore or a sports story about the Boston Celtics as a romantic poem for Jane or an essay in literary appreciation, he proved that the life of a poet and the career of a professional writer could coincide. He worked in a variety of genres and wrote for periodicals as different from one another as The Paris Review and Sports Illustrated, The Boston Globe and Yankee, and showed by his example that all the writing you do helps all the other writing you do, and all the styles and forms of writing are valid: the interview, the children's story or poem, the textbook, the diatribe, the anecdote, the blessedly unself-centered memoir in which the emphasis is on Robert Frost, T. S. Eliot, and Ezra Pound. Join me in saluting this masterly poet, teacher, editor, writer. -- DL

To grow old is to lose everything.
Aging, everybody knows it.
Even when we are young,
we glimpse it sometimes, and nod our heads
when a grandfather dies.
Then we row for years on the midsummer
pond, ignorant and content. But a marriage,
that began without harm, scatters
into debris on the shore,
and a friend from school drops
cold on a rocky strand.
If a new love carries us
past middle age, our wife will die
at her strongest and most beautiful.
New women come and go. All go.
The pretty lover who announces
that she is temporary
is temporary. The bold woman,
middle-aged against our old age,
sinks under an anxiety she cannot withstand.
Another friend of decades estranges himself
in words that pollute thirty years.
Let us stifle under mud at the pond's edge
and affirm that it is fitting
and delicious to lose everything.