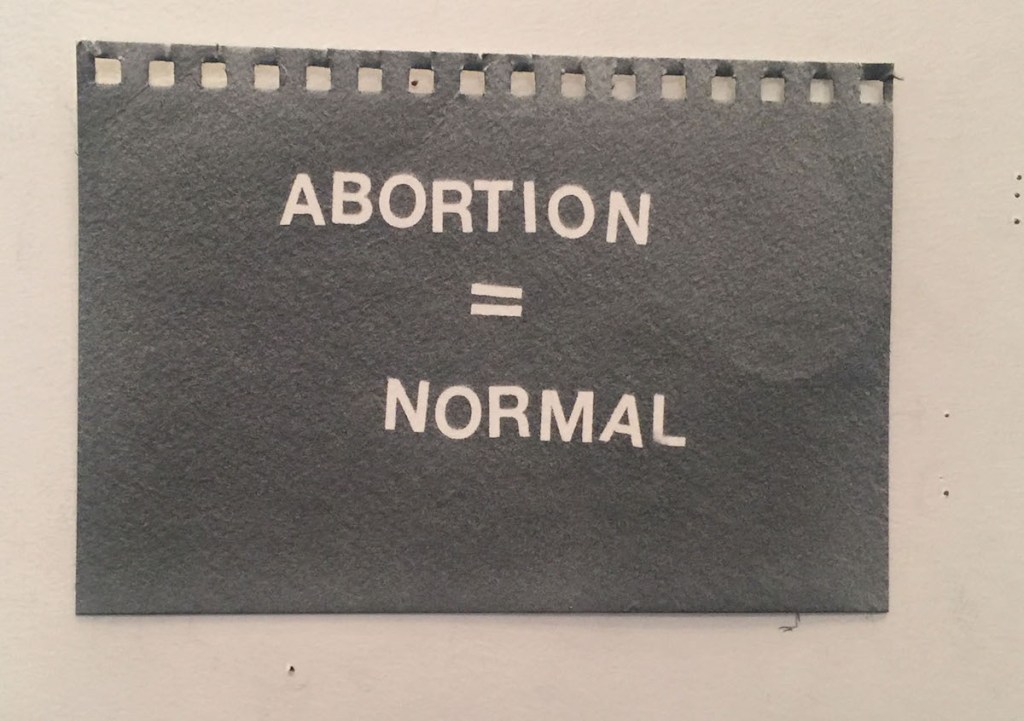 [Update: A previous version of this article indicated that the second iteration of “Abortion Is Normal” was already planned with a date set. The show is still in early stages, according to sources, who indicated that previous reports were premature.]

The organizers of the landmark exhibition “Abortion Is Normal” are considering organizing a second iteration of the show after a leaked Supreme Court draft opinion published by Politico Monday revealed that the court intended to overturn the 1973 Roe v. Wade decision that established a constitutional right to abortion.

The first iteration was conceived in 2019 by Jasmine Wahi and Rebecca Jampol following a series of state-level attacks on abortion access. Dubbed an “emergency exhibition”, it opened in New York in 2020. In response to the Supreme Court’s expected decision in June, the curators have discussed debuting a new show as early as next month, though an official date or structure has yet to be confirmed.

The exhibition’s planning committee, which includes artists Marilyn Minter and Laurie Simmons, has even discussed reimagining the strategy and scope of the prospective exhibition, Wahi told ARTnews Tuesday.

“The main thing we want to do is really move beyond New York or even the northeast and metropolitan liberal coasts and put up these signals to let people know there is a community out here to help them in places where it matters,” Wahi said. “There are 13 pivotal states that if—I say if, but really when—Roe is actually overturned will automatically regress into a period of deliberately violent oppression against people who can get abortions.”

“We’ve talked about driving a bunch of giant trucks cross country filled with a mobile exhibition, which is something we might actually do, or doing a massive billboard campaign. Maybe both,” she said. “Whatever form it takes the way we’re rooting it in the idea that we are here, and we are not going to go away, we genuinely, unapologetically believe that abortion is normal.”

Planning for the inaugural “Abortion Is Normal”  show began in May 2019 after Alabama governor Kay Ivey signed into law the Human Life Protection Act. (A New York Times review of “Abortion is Normal” pointed out that “in the time it took them to plan the show, Republican-led states passed more abortion restrictions — 59 total in 2019.”)

Over 60 artists participated, including Catherine Opie, Elektra KB, Barbara Kruger, Louise Lawler, and Lyle Ashton Harris. All the works were for sale and the proceeds went to a political fund-raising group focused on reproductive rights. It was a wide-ranging presentation: abstraction and figuration were represented across sculpture, painting, photography, and mixed media.

Some participating artists chose a blunt approach to the subject, like a 2011 print by Barbra Kruger which read “Who will write the history of tears?” Others subtly interrogated the myopic interests of the white, cis feminist abortion movement by centering gender-nonconforming, transitioning, and people of color—all of which face the greatest barriers to reproductive healthcare.

The Brooklyn-based illustrator and painter, Tatyana Fazlalizadeh, for example, highlighted the first Black president of Planned Parenthood, Faye Wattleton. In one of her graphite and photo collages, the faces of two Black women loom; below them is a searing text on how bodily autonomy is stolen in the United States. “Someone said we were like children and could not be trusted to think for ourselves,” it reads, borrowing words from the unprecedented 1989 pamphlet “We Remember: African-American Women Are for Reproductive Freedom,” authored by 16 Black women activists.

While Wahi said artists in the 2020 show would be invited to exhibit again, she said she is actively searching for more artists with experiences outside of mainstream understandings of reproduction.

“One of the things we were hoping to do, and I don’t know if we were completely successful in the first iteration of ‘Abortion Is Normal,’ was to really look at a broad spectrum of bodily agency,” Wahi said.

“We tried to put an effort into it in the first round but one of the things of it being an emergency exhibition is that most of the artists were from our networks, or people who were geographically near us, so we could get the artworks quickly,” she added. “This time, I want to get artworks, feedback, insight from people across the country.”

Seconding that sentiment, Jampol added: “We are in the process of formulating new iterations/interventions as part of our ongoing efforts to support abortion access and reproductive justice. In the coming weeks we look forward to sharing how this effort will take place. Our aim is to create intersectional community and solidarity, and to encourage folks to use their voices and their votes. We want to make sure people across the country know that abortion is normal.  And we look forward to sharing information once all the details are finalized.”