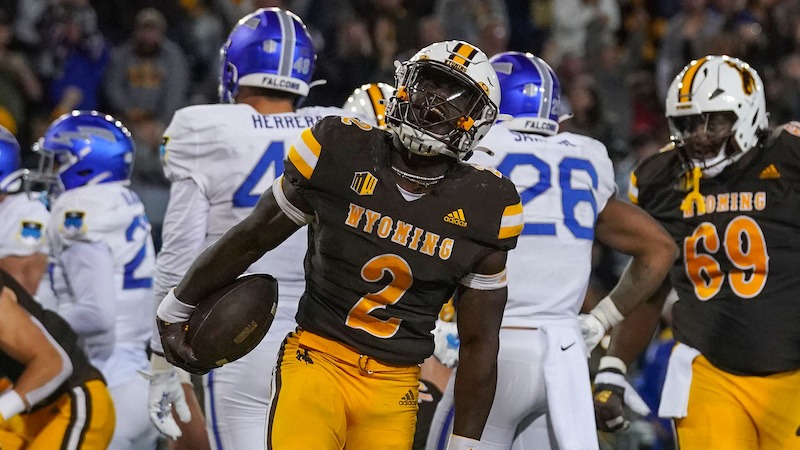 The Mountain West Conference is the true definition of a crapshoot, at least through the first three weeks.

Last week, Air Force had the top spot on these power rankings.

But the Falcons lost to Wyoming in a surprising outcome, and Fresno State’s loss to USC pushes them down a little bit as well.

There is just one MWC team with three wins: Wyoming. On the other side, there are six teams with at least two losses, and the bottom half of the conference does not look very good.

Here are the latest Power Rankings after Week 3, and with MWC play starting up, we can finally begin to see some clarity. Hopefully.

Imean, who else could we put at the top?

The Cowboys have avenged their season-opening loss to Illinois with three straight wins, and the victory over Air Force is the biggest of them all.

The Cowboys play BYU this weekend coming up, but after that have a very favorable stretch: San Jose State, New Mexico, Utah State, Hawai’i, and Colorado State.

The Falcons dropped solely due to their loss to Wyoming.

However, they are still one of the best teams in the MWC, at least up until this point.

The Cowboys keyed in on their rushing attack, forcing the Falcons to throw the football. Next up: Nevada.

The Broncos’ only loss so far is to Oregon State in Week 1.

They looked good against Tennessee-Martin, which is obvious.

Boise State has UTEP next, then a trio of tough games against SDSU, Fresno State, and Air Force.

Yes, the Bulldogs have a pair of losses, but this spot feels right for them.

One loss was against Oregon State on a last-second Beavers touchdown, and the other loss was against the USC Trojans, who continue to show that they are one of the best teams in the country.

Jake Haener left the game with an injury and came back out with a cast, so that could be a serious issue for Fresno State going forward.

The good news is that they play UConn next week.

UNLV is here because I really have no clue who else to put.

The bottom half of the MWC looks really bad, although the Aztecs can easily crack the top-four if they figure things out offensively. UNLV is much improved and won against North Texas easily, 58-27.

With the West Division looking a bit odd, UNLV could rattle off some more victories, beginning with a road game against Utah State in Week 4.

The Spartans are a tough team to gauge.

They won against Portland State in Week 1 then gave Auburn a tough time in a 24-16 loss to the Tigers.

They had Week 3 off and now face Western Michigan in Week 4.

The Aztecs got crushed by Utah on the road in an embarrassing effort all around.

SDSU faces Toledo, and they opened Sunday as a 1-point favorite at home. If they lose to Toledo, Brady Hoke might be beginning to pack his bags.

New Mexico has wins against Maine and UTEP, so they can’t really be measured against anything to this point.

They lost to Boise State 31-14, and they face LSU this weekend.

So, things really won’t become clear until they play UNLV.

The Wolfpack have dropped quickly in these rankings.

After a 2-0 start, they lost to Incarnate Word and then got shut out on the road against Iowa in some weird midnight football action.

The Hawkeyes blanked them 27-0, and Nevada faces Air Force this week.

Utah State had a week off, which was much-needed.

They have two losses, to Alabama and Weber State, and the only victory came against UConn.

Next up is UNLV, followed by BYU and Air Force.

The Rainbow Warriors got their first victory of the Chang era by defeating Duqeusene, 24-14.

They could get another one with New Mexico State on tap in Week 4, but the Rainbow Warriors will be battling the Rams for last place in the MWC.

Are the Rams going to win a game this season?

They have lost to Michigan, Middle Tennessee State, and Washington State, so they have played a decent schedule. However, in three games, they have scored a combined 33 points.

Things aren’t looking very good in Fort Collins. However, they should get a victory with Sacramento State coming to town this weekend.

Matt covers Mountain West football and basketball for SuperWest Sports and writes for a number of other sports publications.